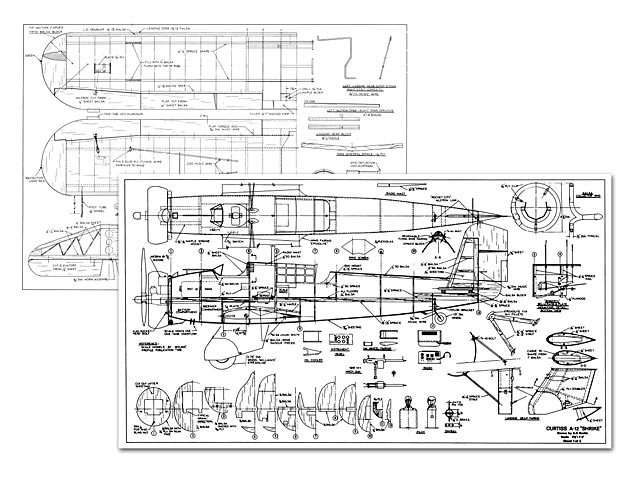 Quote: "Our plane on this month's cover may be built as an R/C or U/C model - or you can do like the author, and kill two events with one bird! It converts either way in just minutes. Curtiss A-12 Shrike, by Charlie Smith.

What to build next? Isn't that always the problem? My wife and I were driving back from contests in Phoenix late January - in which I didn't place. Placing is not all that important, but somewhere close!

The U/C Bristol 'Brisfit' and the old R/C P-51 just didn't have it anymore. I like to fly both U/C and R/C scale. This year I wouldn't have time to build both another U/C and R/C. What about one plane that could be built and flown both ways? That's an idea. Ok, what? We stopped at the hobby shop in Grand Junction and picked up some Profile Publications - the Shrike (No.128) included.

After looking them over, and plan books by Wylam (they are something else for the scale builder), the Shrike was it. Odd, but good looking, a classic of it's time. All metal, low wing, designed specifically for the attack role. Wing span 44 ft, powered by a Wright RY1820-21 radial engine of 670 horsepower. It was the first plane to be used by the Army Air Corp with full span, automatic leading edge slots. It carried the mail, was in service at Hickam Airfield, Hawaii in 1940, and in China. It carried 4 machine guns in the wheel fairings (spats) and a single 30 caliber for the observer. The Shrike was probably the least recognized plane to train pilots in WW II.

The Shrike is a low wing tail dragger, with good moments, plenty of wing, and lots of detail. Also, at 1-1/2 inch scale there is plenty of room for U/C and R/C gear. It is flown U/C with all radio gear aboard, except the receiver, and R/C with the bellcrank assembly and wing line guide removed. By the way, the Shrike flies well both ways.

CONSTRUCTION: This will be broken down into fuselage, stab, fin, wing, engine, pilot, wheel fairings, hatch, and wind screen. For further details, there's a general discussion at the end of the article. Build in any order you like.

FUSELAGE: Trace the bulkheads on the appropriate material and cut and sand to shape. Bulkheads No.1 and No.3 have a 1/16 plywood doubler as shown. Epoxy these together. Make up two crutches of 1/8 x 1/2 spruce as shown. Note the step and spacer at the rear end. Cut engine bearers and assemble to bulkheads No. 1 and 2. Epoxy this assembly. Check for squareness - no down thrust or right thrust. Mark the crutch assemblies with bulkhead locations. Epoxy crutch to No.1 and No.2 bulkhead assembly. When dry, assemble bulkheads Nos. 4, 5, 9, 10 and 12. Check that these are 90° to the crutch and straight in the top view. When dry, install the balance of the bulkheads.

Install 1/16 balsa sheeting between bulkheads 1 and 2, 2 and 4, 5 and 8. Install 1/4 sq stringers as shown, also bellcrank rails and stab blocks. Now skin the frame with 3/32 balsa sheets. In tight contours, plank with 1/2 x 3/32 inch strips. Do not cover the bottom rear so as to install the push rods later.

Fit wing into fuselage. Trim as necessary so that the wing is 900 in both axis of fuselage. Hold in place so that stab can be installed, check for squareness. Glue and let dry. Install fin on centerline of thrust and 900 to stab. You know, with all this gluing and checking it's time for a beer. It's rough, but doesn't look too bad. Take a picture. As a matter of fact, take pictures all through construction. 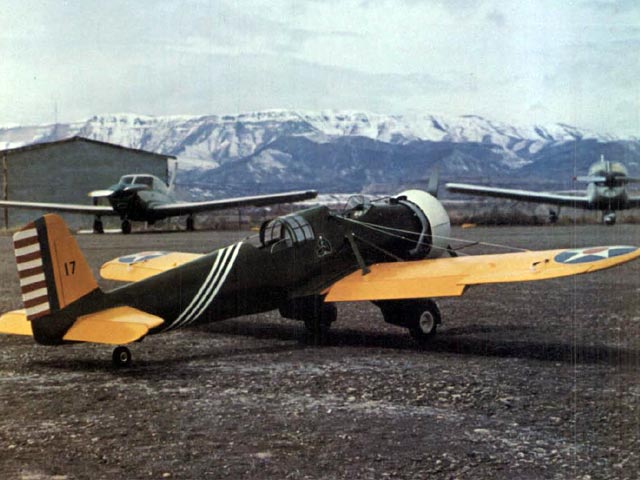