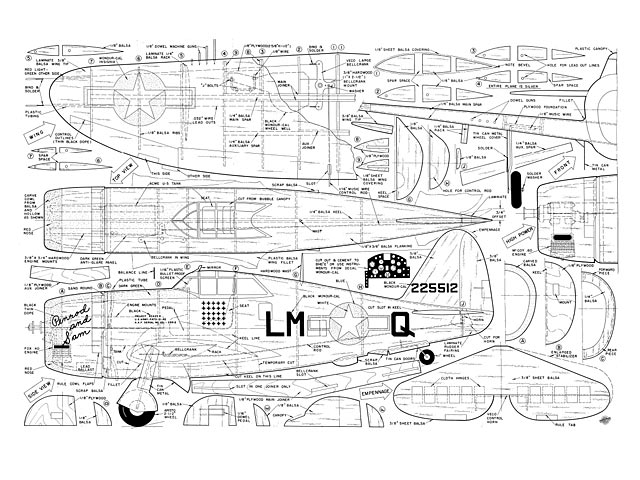 Quote: "How to Build a Control Line REPUBLIC P-47D.

Republic's P-47 Thunderbolt was one of the largest, most successful single seat fighters of the second world war. Generally considered a development of the famous P-35 and P-41 pre-war designs, in reality the P-47 was much more powerful and heavier with a maximum loaded weight of over 17,000 pounds - more than twice that of other contemporary single engine fighters.

Over 12,400 'D' Thunderbolts were constructed (out of a total P-47 production of 15,700 aircraft). The D, by far, was the most widely used Thunderbolt. It was during production of this series that the bubble canopy was introduced on an American design; therefore P-47D's could be seen with or without the bubble depending upon when they were built. The amazing ruggedness of the Jug was its outstanding quality. Virtually all of the leading Thunderbolt Aces survived the war; this was due, in part, to the ability of the plane to absorb terrific punishment and still limp home saving its valuable pilot.

The eight wing-mounted .50 calibre Browning machine guns could tear an adversary apart with one burst. When used as a dive bomber the P-47 carried two 1,000 pound bombs or three 500 pound bombs. Long range drop tanks could be substituted. Rigged for level bombing runs Republic's joy could carry half the load of a B-17 Flying Fortress! Thunderbolts dropped over 130,000 tons of bombs, fired over 135 million rounds as their contribution toward winning the war. Ten 5-inch rockets were carried by some Thunderbolts during the final years of the great conflict.

Ace Bob Johnson piloted several different Thunderbolts during World War Two. Our plans illustrate the last P-47D he flew before he was ordered home. Unlike the earlier planes which were camouflaged, this particular craft was left natural aluminum. The twenty five crosses beneath the cockpit were increased to twenty eight before the Ace left for America. Close-up photos of a P-47 are scheduled for the next Air Progress quarterly on sale August 31.

This one inch to the foot scale produces a plane which can accommodate any powerplant from .29 to .60 cubic inch displacement; the deep cowl will hide almost any model engine.