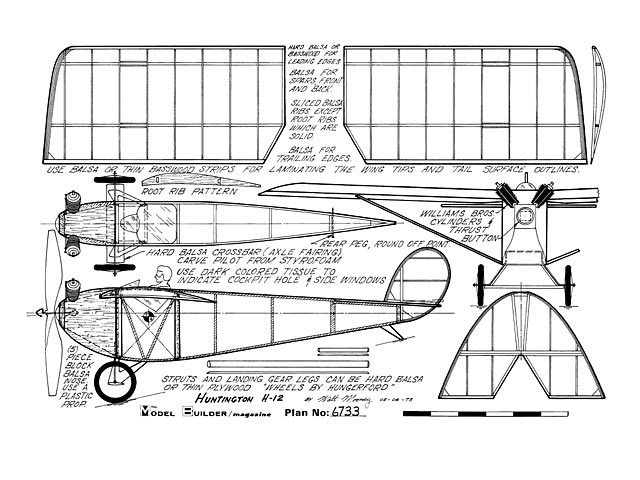 Quote: "Hi Steve - Here is Walt Mooney's Huntington H-12 from Model Builder magazine issue 06-73. This is a scan of the full size peanut 'centerfold' plan in this issue. The scale bar can be used to enlarge the plan to the 19 inch model mentioned."

Quote: "This month's feature, the HUNTINGTON H-12, is another two-in-one model; the peanut on the next two pages, or the 19 in span model from Plans Service.

This is a model of one of the first homebuilt airplanes in the USA. Not that all the first airplanes weren't really built at home, but this was designed after WWI and was actually intended to be built by amateurs. It used a two cylinder 'V' type engine, undoubtedly out of a motorcycle. It was truly an attempt to obtain an airplane for a minimum first cost.

As a consequence of this effort it was built very simply and therefore makes a simple model. We have once again designed the model in a larger size, but in a format that will be reduced in the magazine to a full size PEANUT SCALE plan. You are therefore free to build a peanut Huntington H-12 from the magazine plans, or for a nominal price, you can purchase larger plans from the Model Builder Plan Service.

Both sizes of the Huntington have been built and both fly well. However, it would be dishonest to claim that the model wasn't tail heavy. Before it would perform a stable flight pattern it had to be ballasted to the CG shown on the plans and in addition, it was necessary to add the up elevator shown in phantom on the plans and in the photos. With these adjustments it was obvious that the nose of the model could have been made stronger and heavier, so the plans were drawn this way. One side benefit from this modification is that a block nose as shown iseasier than bending the longerons for the former built-up front end.

Construction of this model is as simple as a little box fuselage monoplane can be. Try to keep the model as light as possible while still retaining adequate strength. Most of the balsa should be medium for the sticks. The leading edges of the wings should be hard balsa or even bass wood or spruce if desired. These are the part of the airplane that must survive the hardest knocks. The wing tips and the tail outlines were laminated. Use .012 by 1/32nd basswood. Three layers were used around the tail and five layers were used for the wing tips.

If you are a regular reader of this magazine you've read Fernando Ramos' articles extolling the virtues of the thin basswood strips that are available at model railroad supply stores..." 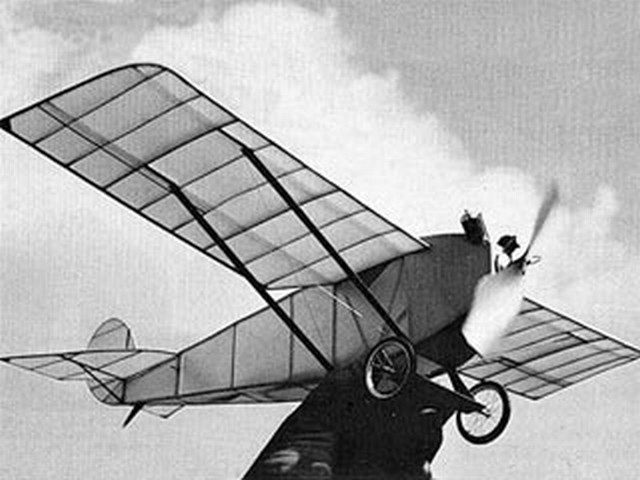