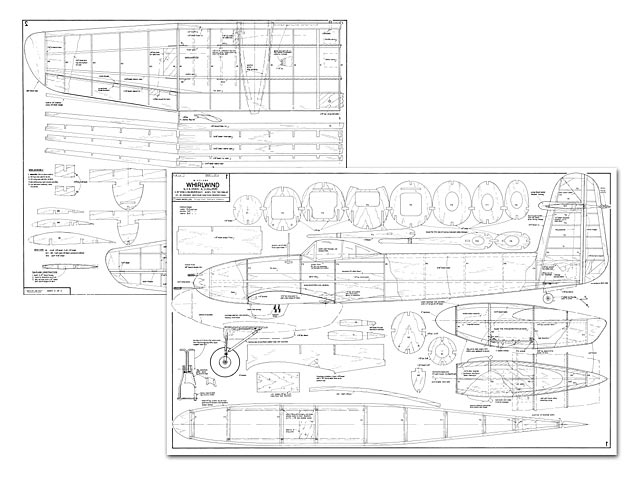 WESTLAND WHIRLWIND! No, not the chopper but a twin-engined fighter-bomber of World War Two. Having flown Super Sixties (oz552) and the like for about three years, I graduated to low wing models by building a Mustfire (oz6365) - finished to resemble a Mk. XIV Polish Spitfire. After learning to fly this, there came the Japanese Hein and then a Hurricane. This latter was flown in the Gravesend demonstration team, as well as being a familiar sight on our local flying ground. After a while, my clubmates started getting at Dave Cronin and me to produce something 'out of the ordinary' from WWII - knowing our liking for aircraft of that period.

The pressure, in fact, became so great that Dave and I spent several evenings, at his flat, looking over all his aircraft recognition books, reference works and so on. The only machine that looked good to us and had not been 'done before', was the twin-engined Westland Whirlwind, an unusual and striking aircraft, brimming with that elusive ingredient - character.

Dave is the design department of our team, so he got cracking over a hot drawing board and came up with the plans you see here. As you will notice, the model is not intended to be dead scale, since we like our planes to be everyday sport flyers, not something kept in moth-balls for those two occasions per year. Most noticeable departure is probably around the tail end. On the full size machine, the rudder was in two parts, above and below the tailplane. To simplify things, we have made it a one-piece control surface, with a cut-out in the elevators for rudder movement. Those who are offended by this can always built it in the scale way if they prefer. The undercarriage has been shortened, and moved forward, and the nacelles slimmed slightly, and there are other slight departures. But, you'll agree, the essential and very distinctive character of the Whirlwind is there in plenty.

The construction is quite straight-forward; both crutch and spine systems are used for the fuselage and nacelles for accuracy of assembly. The wing is really beefy around the centre section and keyed into the nacelles, where the vibration and landing shocks have to be absorbed. The whole model is sheeted, yet the fuselage and tail unit are surprisingly light. With a little forethought, the building sequence of fuselage, nacelles, wing and tail can be dovetailed to allow plenty of time for the glue to set, without holding up proceedings..." 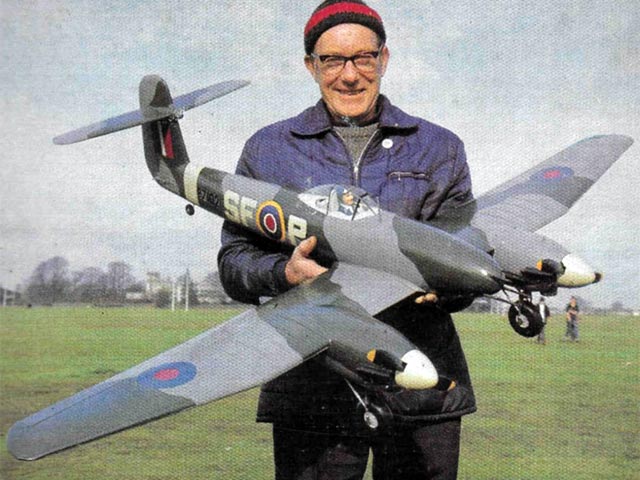 Hi Steve, I recently got that plan. I have had it laser cut, haven't started building yet,
Brian - 12/12/2013
Brian, I would love to get laser cut set. Your cutter still around?
RichardNagelin - 26/02/2016
Hi, I would love to get a copy of g code or stl laser cutter file as I have access to a laser cutter.
Bob - 26/11/2018
I had a wood set cut at Braincube aero models in 2017. Service quality and delivery excellent. Have built an electric version which is now in the final assembly stages. The build write up wasn't a great deal of help.
John - 25/02/2019
I used one of your online plans of a Westland Whirlwind (oz4731 by Dave Cronin and Ed Hollandby) and have just completed the model. It is currently ready for a test flight so bin bags on standby. I went away from the original design by installing electric motors and a set of retracts. A steerable tail wheel and servo operated elevators complete the major plan changes. My design also features a removable cockpit cover to enable fitting of batteries. Anyway the results can be seen in the attached photographs [more pics 006-012]. Painted using emulsion paint (samples from B&Q) it still awaits a final coat of varnish. Thank you for supplying the drawing. Let's hope it flies as good as it looks.
JohnHurdle - 03/06/2019
Nice work, very nice. Let us know how she flies.
SteveWMD - 03/06/2019
Just a quick note to say that we've now completed a first flight on the Whirlwind, no bin bags necessary. Just a few minor tweaks necessary, maybe a little down thrust on the engines and a little centralising of the elevator on the control box. Final job is to apply a thin coat of varnish to seal the Decals and we should be able to look forward to some decent flying. This aircraft looks the business when it's airborne and a real treat in the pits. Should fit-in nicely at the club warbirds day. Some additional build information: we made a mould for the forward half of the Nacelle's which once again worked out very well. The removable units provide good access to the Electric motors, ESC, wiring etc. The cost for a pair was circa £20 and the finished plastic units look nice. The Spinners were obtained from the USA and match the selected colour scheme.
JohnHurdle - 18/06/2019
To John Hurdle: I am just embarking on a build of the Whirlwind having built one for ic about 40 years ago! This time I am would like the plane to be electric. Can you give an indication of motors used and battery size. The world of modellling has changed dramatically since I stoppped building. Is the canopy available?
Tony Chalkly - 30/01/2020
To Tony Chalkly, I have seen your request to John Hurdle for information on electric motors and battery used on John's Whirlwind. I am in the same situation as you I have lots of experience with i.c models but struggling with electrics. Do you have any details from John?
Brian Arnall - 19/02/2020
Add a comment