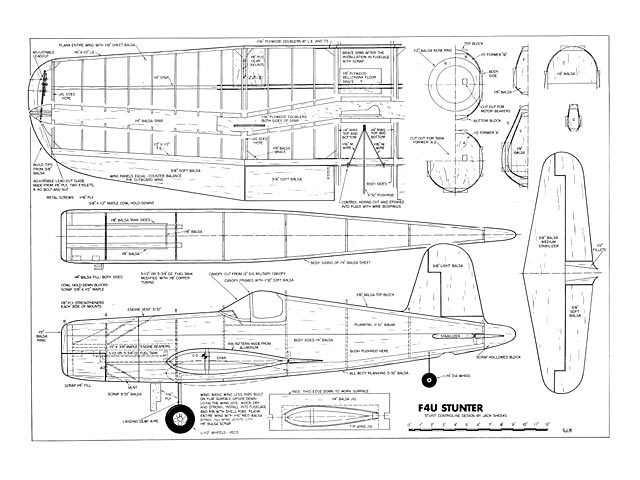 Quote: "F4U Corsair Stunter. Time to be daring and deviate a bit from the accepted stunt controline platform. The inverted gull Chance Vaught Corsair inspired this one. Turns in an able performance. By Jack Sheeks.

The model that you see here was inspired by Pappy Boyington and his Black Sheep squadron, and also by a bent-wing Stuka of a few years ago.

The real aircraft, the Chance Vought F4U-1 Corsair, remained in production for 13 years, even though it was deemed a failure early in its career. The prototype first flew on the 29th of March 1940 and attained the impressive speed of 405 mph. The distinctive bent-wing (inverted gull) feature of the aircraft came about due to the marriage of the most powerful piston engine (2,000 hp) ever installed in a fighter, and the world's largest fighter plane prop (14 feet in diameter). The wing had to be gulled or bent in order for a short, sturdy landing gear - deemed necessary for carrier operations.

As for this model, a Stunt Controline inspired by the prototype, ols Pappy would be pleased with it as it will still fly with the best of them. The ship is a bit large and bulky, in keeping with this designer's frame, yet it has a distinctive character all of its own, and the more you see it the more you'll like it. Since this ship has come into existence it has fired up a few furnaces and proven once again that Stunt ships are like Stunt flyers, they are not all shaped alike and don't have to be machines..." 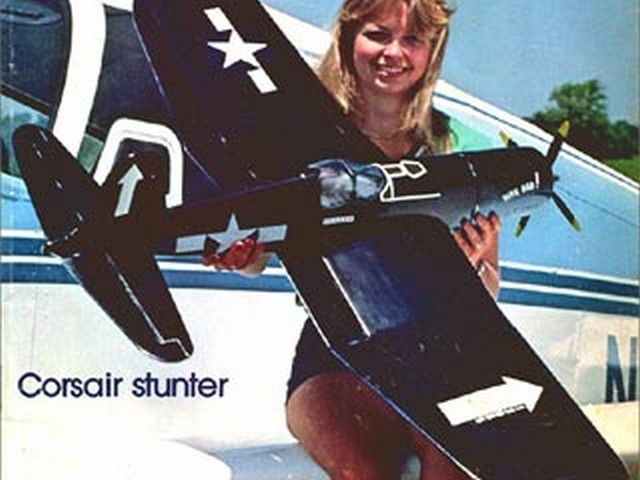