Quote: "In 1958 the National Navy Carrier rules advisory group discussed the big problem of attracting new flyers to the event. The high cost of large motors was cited as one of the basic problems. My suggestion was multi-engined models which would permit participation by anyone with two old 29s or 35s in their motor box. The use of two engines for high speed and only one for the low speed would permit cutting the power in half for the low speed and landing.

The Grumman F7F (Tigercat) presented is the result of eight years of experimentation. It was used in 1959 at Los Alamitos by my wife, Virginia, and an identical model, except for engines and mounts, by myself at Dallas in 1960. During this eight year period approximately 20 copies have been built in various sizes and with gradually improved methods of construction. This model, designed on a 'safe-and-sane' basis to keep Virginia happy, is aimed at a high speed of 100 mph and a low of 25 mph in still air.

To me the Tigercat is the only practical US twin engine design for the event (other qualifying types have too much frontal resistance, too small prop diameter). This plane incorporates a wing section which stalls gently and smoothly, permitting the model to be flown up to the deck in a safe attitude with the aft end of the fuselage level with the bottom of the main wheels and at a safe low-speed altitude of from 2 to 4 feet. When the model is about 15 feet from the deck, the nose is pulled up at about a 20 degree angle, and the model sinks rapidly but under control in a tail-down attitude. If the hook misses, it is a simple matter to open the throttle, and go around again. The nose up attitude prevents breaking props as so frequently happens in a dive-bounce-and pray landing.

In the following, a clarification should be made in the matter of adhesives used in bonding various parts of the model..." 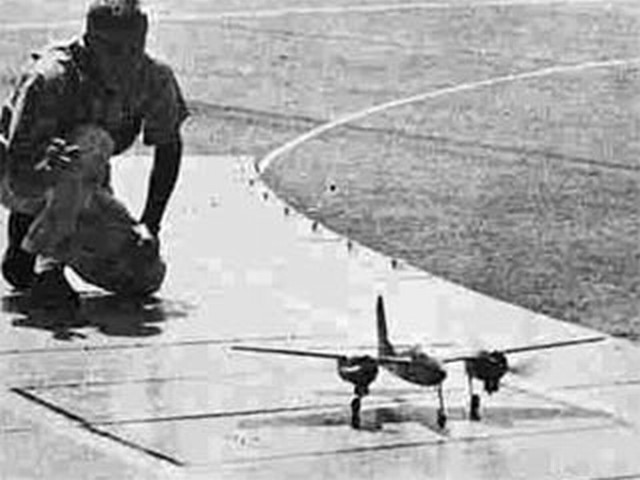