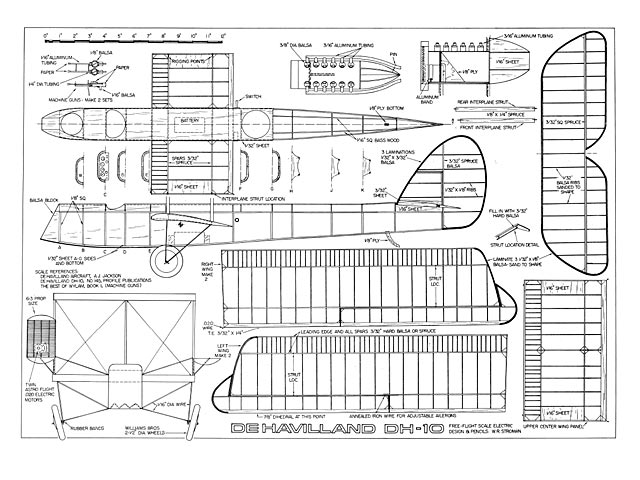 Quote: "I have been experimenting with multiple engine free-flight models for about a year. The main problem has been keeping the engines synchronized through the power phase. There are systems for doing this with gas engines, but most are complicated and not always dependable. Bob Bouchet of Astro-Flight Inc suggested that I use two electric motors wired to a common battery, and this was an excellent solution to the problem and has worked very well.

I chose the DH-10 for my test bed because of its inherent stability due to the four degrees dihedral and four degrees sweepback of the wings. The large rudder and stabilizer were also helpful. This model is as close to scale as I could find data for, the only thing that isn't documented is the dashboard layout. You will find that the flight is scale-like also. The rollout for takeoff is long, say about 30 feet, then a gradual but positive climb followed by a cruise to the left in about a 50 foot circle. The descent is gradual and the landing is good.

The most fun I've had is having some of the R/C flyers watch it fly and ask me what frequency I'm on. When I tell them it's Free-Flight their eyes almost pop out of their head. But enough of my DH-10 let's start building yours.

The first thing to do is to make an aluminum template of the wing rib and of the false rib. Why first? Because while waiting for something to dry, one can cut 5 or 10 ribs and store them away. As you have to make one heck of a lot of wing ribs, this is a less painful way of doing so.

The Fuselage: As in most models, lay out the box frame sides on the side view of the plans. The frame should be medium to hard 1/8 square balsa. Then put the spacers to make a box form from the top view. Add the nose block next and the landing gear wire, (I wrap mine with thread and glue it with three coats of cellulose cement, It makes a very strong system). Now cover the bottom and sides with 1/32 sheet to just behind the rear gunners cockpit. Glue a piece of 1/16 sheet on the inside area where the lower wing goes through.

Lay out the stringers for the lower center wing full length, glue the ribs on one side only and mark the location of the ribs with a pencil on the opposite side. Mark the locations of the stringers on the side of the fuselage using the rib template, cut the holes, and slide the wing through, and glue on the other ribs and false ribs. In-sert the fillers between the stringers at the end rib spaces and add the fillets, .020 dia. wire loops for the rigging, and hooks for the rear hinge. Install the landing struts of 1/16 dia. wire on the wings and glue them in well. Add the 1/8 plywood insert for the tail-skid at this time being sure to slot it for the tailskid.

Engine Nacelles: Cut the 1/8 plywood motor mounts and glue them together and make a hole in the upright mount for a tight fit of the .020 motor. Measure and cut the interplane struts that fit at the ends of the center wings. The best way to make these is to laminate two 1/16 x 1/4 in hard balsa strips together with the 1/16 dia wire between them. Make sure that the wire ends are long enough to protrude into both wings for good support. Glue the motor mounts to the struts and install the diagonal wire braces for additional support. Now install the Astro .020 motors on the mounts with aluminum bands held in place with small bolts and nuts through the 1/8 plywood.

Install the battery now, and put 1/2 in square blocks in front and back of it to avoid its shifting during flight. Now is a good time to install the switch and power supply plug. Mount these on 1/16 plywood and wire the assembly leaving plenty of extra wire to go to the motors. Check your motors for opposite rotation, and if all is in order start carving the blocks for the top of the fuselage. Make these as thin as practical as you want to keep the weight down as much as possible. The block that goes between the struts should be built in two pieces so you can install them easier. Position the two center interplane struts at this time being sure to put a filler between the stringers at this point. Next make the formers from behind the rear cockpit to the tail and glue the two stringers to them. Put sanding sealer on all the sheet parts to fill the grain followed by three coats of dope on all the structure. Cover the fuselage with tissue on all surfaces (not Silk-span, it is too heavy)..." 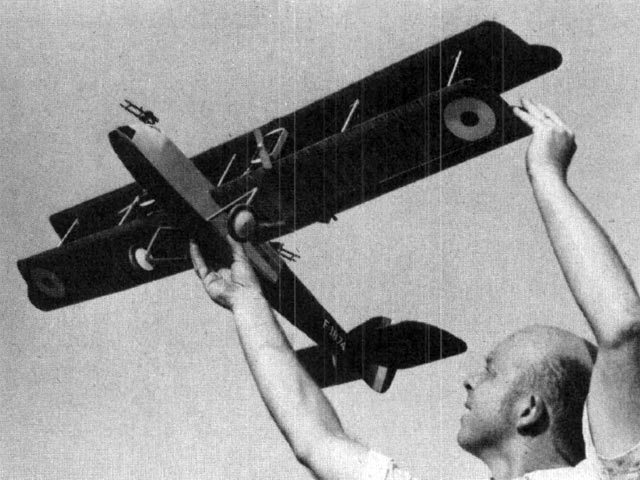