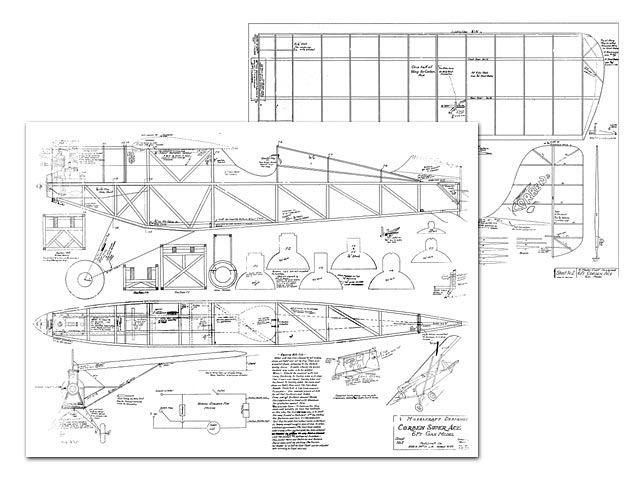 For more about Modelcraft, Barney Snyder and this design, see long article by Jim Alaback in KAPA Collector #59 (Sept 2007). Available as a free download at from the FAC website at http://flyingacesclub.com/wp/the-fac-library/the-kapa-newsletter-archive/

Quote: "Snyder had designed and built a successful scale gas model of the Corben Super Ace in the summer of 1935, and he decided to produce a kit for it. This led to the first national advertising for the Modelcraft business, in the February 1936 issue of Model Airplane News. This was the first scale gas model (and only the second gas model kit of any kind) to be advertised in the model airplane magazines.

The Corben Super Ace was not only a pioneering kit for Modelcraft but also very financially successful for the company. A very expensive kit, compared to the previous small solid and flying scale rubber models, it led to a continually expanding line of gas models and to national advertising for not only their gas models but for their previously-regional line of solid and rubber models.

In 1937 the Corben Super Ace kit was discontinued until called back into production by Albert E (Pete) Dillon's widely publicized winning of the duPont Payload event at the 1937 Detroit Nationals. Pete Dillon had built the model from a Modelcraft kit he purchased in February 1936. It was his first gas model, and it took him a year of regular flying before he got it flying the way he thought it should. He altered the kit design by moving the landing gear assembly one fuselage bay forward of the scale position shown on the kit plan and he added sheeting to the wing's upper leading edge. He also flew the model without the scale wing struts.

The Super Ace wingspan was 70 in and the wing area about 750 square inches. Weight, ready to fly with a Brown Junior engine, was 4-1/4 pounds. For Pete's winning flight he strapped a 2-1/4 pound doorbell battery beneath the fuselage as his 'payload.' It was hard to believe the model could have lifted off with that great thing strapped to its belly, but it did.

And it won the event, which was scored by points figured from a formula including the model weight (up to a maximum of seven pounds). Seventeen official entries recorded scores ranging from Dillon's winning high of 114 points down to 51.2 points for the 17th-place finish of Bill Effinger of Berkeley Models.

As a result of Dillon's DuPont Trophy victory, not only did Modelcraft put their Corben Super Ace back in production, but Air Trails magazine published the plan for it, including Dillon's modifications, in February 1938..." 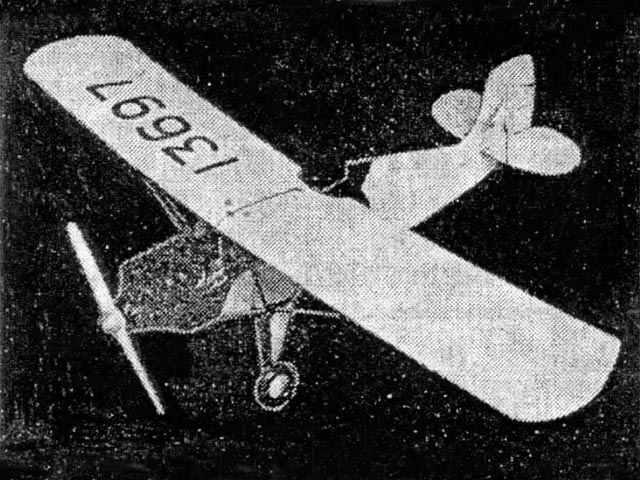