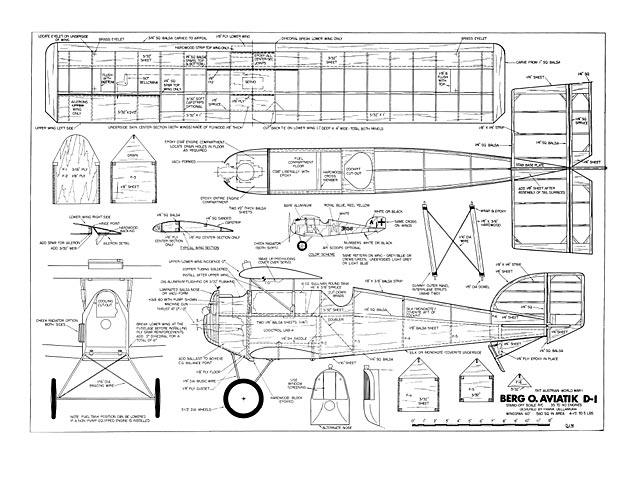 Quote: "I am the kind of modeler who is more than a bit jaded with the endless run of look alike scale and semi-scale kits. There are endless variations of P-40's, P-51's, FW-190's ad-nauseum. Go back to WWI and you've got the same thing, only with less variety. Lately I've felt the need to satiate a modest mania for a World War I bird.

After searching the available literature I ran across some photos of a pugnatious-looking little biplane known as the Berg-Aviatik D-I. The peculiar, stocky (even ugly) look of the machine began to captivate me. A little more digging revealed that the airplane hasn't a curved surface anywhere! That's just the kind of model I was hoping to find! A Profile Publication edition (No. 151) gave me just about all of the information I needed to start.

It's very likely that not many of you have heard of the airplane. It is one of the few fighters designed and produced solely in Austria for use in her own Air Force. While it was a well designed fighter it never became too popular with the pilots since she was a bit too stable for the tastes of the day. Her name stems from it's designer Julius Von Berg and the producer Oesterreichische-Ungarische Flugzeng-fabrik Aviatik (try saying that three times, rapidly) or Aviatik for short.

The early D-l's were fitted with 185 hp Daimler engines and a car-type radiator in the nose (similar to the Fokker D-7, but uglier). The prototype had cheek type radiators with a fairly well streamlined nose cowl. The last of the series employed a box-type radiator on the upper surface of the top wing. 1 picked the streamlined cowl. It looks far better than the car radiator. For those of you who would prefer a change the drawing shows two nose configurations and three radiator types. Since my model is not fully scale I left off the radiators because, frankly, I think the ship looks better without them. Further, you certainly don't need the extra drag especially if you're flying with a .35.

Another detail you can dispense with are the machine guns. The D-I carried two 8mm Schwarzhos machine guns that were completely buried inside the fuselage (alongside of the engine). All that's needed are two pieces of dowel as indicated on the plans.

With two equal span (and chord) wings at 24 feet, the D-l makes an ideal subject for a 1/2 inch to the foot rendition. The model span turns out to be a neat 36 inches with a total wing area of 560 square inches. The dimensions put the model nicely inside of the .35 to .15 displacement range.

All of the tedious weight calculations and re-drawing paid off. The result was an airplane with a basic structural weight of 2 pounds 7 ounces (less engine, fuel and radio). When flying hardware is added the ship came out to 4 pounds 11, or just shy of a wing loading of 20 ounces per square foot. The result is a modest sized airplane that will not fly beyond the capability of the average flyer's ability. The CG should be not further aft on the finished model than the 30% top wing chord position indicated, and 25% is preferable

The scale airfoil, being a thin reflex type, was discarded immediately. I replaced it with a 14% thick Clark Y. The change makes it easier to build the wing and improves the flying qualities. I selected the thinnest airfoil consistent with the aileron servo size. Depending on the radio equipment you have you may feel the need to build the wing a hair thicker. The slight increase will not harm the flying qualities noticably. Drag will be a little higher, but then the stall characteristics will become gentler as the airfoil thickness increases..." 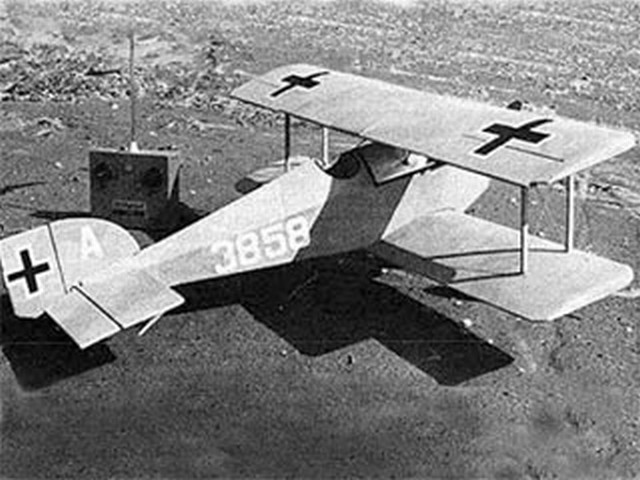