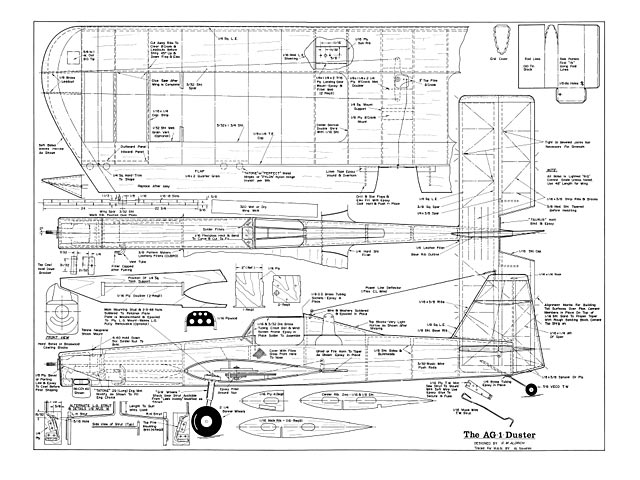 Quote: "Texas A & M University, through its Aeronautical Engineering Department, Mr. Bruce, et. al., and its Agriculture Department, designed and built the AG-1 Crop Duster about 1952. From these efforts the methods of spraying crops were vastly improved. Everytime I saw a photo or a write-up about the AG-1 , I'd say, I'm going to build a semi-scale stunt model of that some-day. Now, fourteen or fifteen years later and a marked departure from the 'racer' designs we started with the Nobler, here is the AG-1 Duster.
It seems to me we have strayed away from what a true stunt airplane should look like. Back in 1946-47, when stunt was a mystery, the first models we built were biplanes; possibly because this was what we saw in the air shows. But at least these models followed the 'stunt' outline - in airplanes. Even today the Kriers, Howards, etc., fly biplanes or high lift low wing monoplanes. The AG-1 certainly looks like an airplane that would stunt. Our only regret is that we never had a chance to see it rung out. Today its wreckage lies in a hangar at abandoned Bryan, Texas A.F.B.
Don't let the barn door wing on the Duster fool you. The upswept or dihedral tips give excellent reactions on square corners without the tip stall generally attributed to this planform. The Duster we flew at the F.A.I. eliminations weighed a monstrous 59 ozs. due to heavier than usual wood and an epoxy paint job. However, the 600 sq. ins. wing still carried the weight nicely. Even with this extra weight, only in the horizontal eights, did the model tend to slack on the lines..." 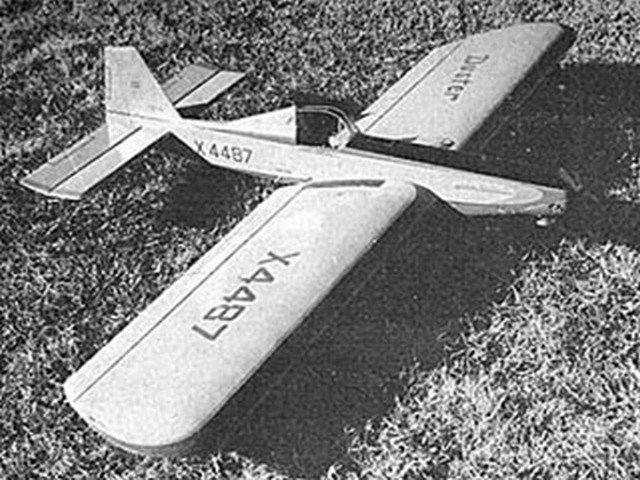