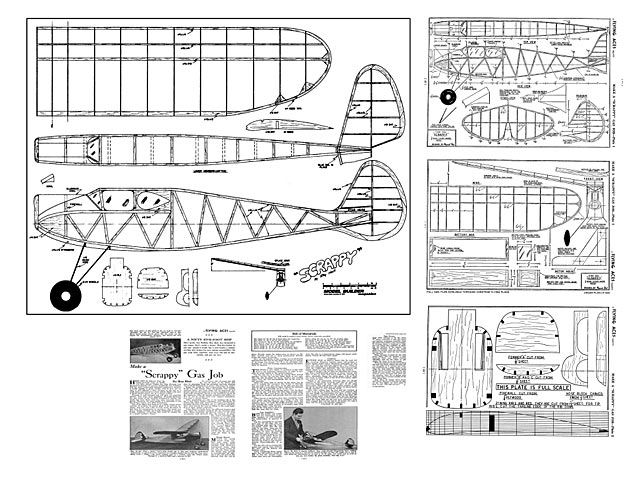 Scrappy Gas Job. Old time gas free flight by Ray Heit, from May 1939 Flying Aces magazine. This is a later redrawn version from MB in the 80s.

Quote: "A NIFTY FIVE-FOOT SHIP Once again, Ace Modeler Ray Heit, has designed a gas buggy that's really a honey. This five-footer is not only simple to build, but it also boasts a unique cowling that makes for easy engine accessibility! So get your tools together, look over the bill of materials, and get set to: Make a Scrappy Gas Job, by Ray Heit

HERE SHE IS, fellows! Just the happy-go-lucky type of model you have always wished for. Yep, Scrappy was designed primarily for service, durability, and stability. She has many noteworthy features combined to produce a model capable of great results. And to give you an idea of how efficient a flyer Scrappy is, she led us a swell chase and turned in a four minute flight with only a thirty-second motor run at a recent contest.

Scrappy is well stressed and will give you supreme service, even after hard handling. Although designed for any motor of the one-fifth horsepower variety, the model has been flown with less than one-tenth horse-power! However, for best results it is advisable to use the former motor - one fifth horsepower.

One of the ship's best features is a sleek, unique motor cowling. It permits the power plant to be entirely enclosed. And yet, with a flip of your wrist, the motor is laid bare for examination or operation! One might say it is a 'dream cowling' for it aids immensely in streamlining, combines everything that could be wished for in a model builder's dream!

To construct this Scrappy gas job, lay out all parts of the plane, full size, by enlarging from the assembly drawing, making use of all the dimensions as given (see plans for scale.)

Begin the model by first constructing the fuselage. Build two side frames from one-quarter inch square medium balsa. Use hard balsa for all longerons and braces. Lay out the longerons in a jig composed of wire-head nails alternately spaced at the maximum bends of the longerons. Glue all upright members and braces in. But do not be stingy with your cement - remember, you want a strong model.

After assembling one side of the fuselage, let it dry for a few hours before repeating your operations to produce the other half. After the two halves are finished, assemble them by cementing the two tail-posts together, then work toward the nose by filling in the cross members at their proper positions.

Using Plate 3, which shows the different formers and ribs, trace the formers required for the fuselage onto balsa sheet - including the firewall which is cut from one-quarter inch plywood. Glue the formers in place. But before attaching the stringers, it is advisable to fasten the landing gear wire in place by wrapping the wires to the fuselage with thread. Then coat the thread generously with cement. After the landing gear has been completed, the stringers will fit into the slots pro-vided for them in the formers.

Make the motor mount from one-half inch dural angle material. Rivet the pieces together with three-six-teenth-head rivets. And bolt the motor mount to the firewall. Then make two straps long enough to accommodate the placing of the coil against tho firewall..."

Update 08/05/12: Thanks to MikeNelson have added full text and drawings from original 1939 article. 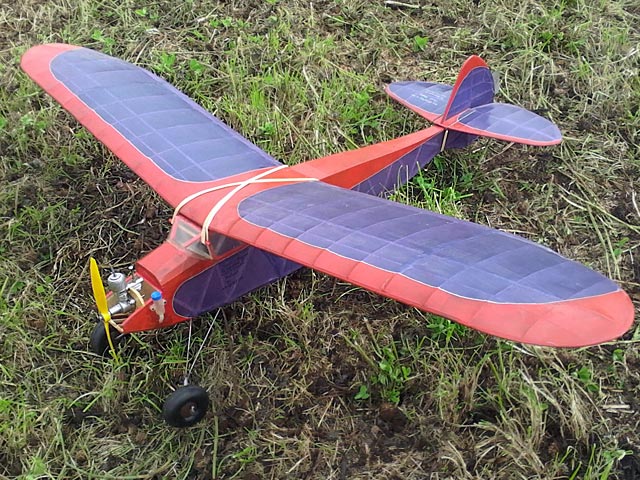 Thanks to Joost for the pics of his completed Scrappy Gas Job model.
SteveWMD - 18/11/2014
Add a comment