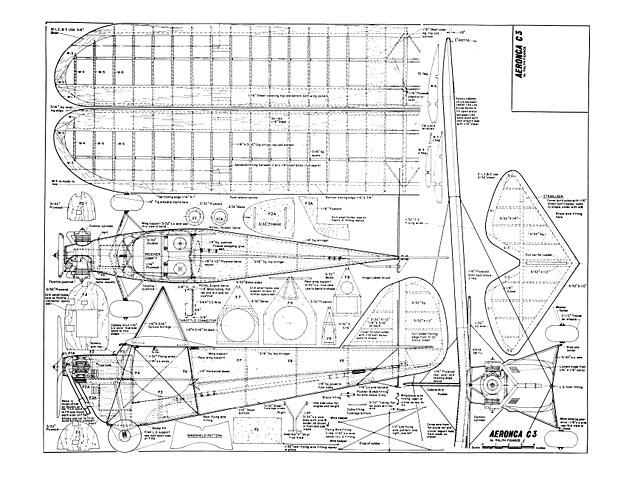 Quote: "Somehow the old Air-Knocker manages to maintain its hold on the imagination of our scale modelers. Aeronca C-3, by Ralph Fidance, with text by Bill Northrop.

If there ever was a contest to pick a company-manufactured airplane that looked more like a home-built job than any other. the old 'Flying Bathtub,' Aeronca C-3, would have won hands down.

Actually, winning such a contest could in no way be considered insulting to the designer and builders of the 'Air-Knocker', because the aim was to produce an extremely light-weight and very simple flying machine ihat wasn't priced out of the working man's reach.

The prototype was built in 1924 by JA Roche, an engineer at the Army's McCook Field. The Aeronautical Corporation of America, located in Cincinnati, first produced the 30 hp single seat version known as the C-2. The two seat C-3, starting with the 'Razorback' style which is the subject of this construction article, was in production from 1931 to 1936.The 1931 version. the one Ralph has modeled, was a bare minimum airplane. The landing gear was rigid, depending entirely on fat, donut air wheels to absorb shocks. There were no brakes, a simple spring-leaf, fixed tail skid, and only enough engine instruments to tell you whether the putt-putt was hot, cold or indifferent. Flight instrumentation consisted of an altimeter, (Would you believe a weighted clothesline with a knot every five feet?) Price was $1,730.

The 1935 and '36 model was revised considerably, going to a fully enclosed cabin, single strut shock absorbing gear, and steerable tail wheel. The engine was Aeronca's own 36 hp opposed twin, and this, combined with the ultra-light loading and high aspect ratio wing produced what could be called a powered glider, capable of soaring under favorable conditions.

The full scale ship on the cover of this issue is of this latter type and belongs to the owner of Summit Aviation Inc, Richard C (Kip) du Pont Jr, son of the well known glider pilot. Kip's plane is maintained in operating condition, and not long ago was flying formation with Tony Wilford's (he's known as the East Coast Orbit Fixer) Fox .59 powered Jenny. The Fox had to be cut down to about half throttle in order to hold the Jenny back to the C-3's flying speed.

Although model builders in the mid-twenties were having most success with twin pushers, it would seem that Mr Roche must have been thinking of future scale enthusiasts when he cooked up the C-3. A simple, straight forward design, the Air-Knocker has a high thrust line, generous tail surfaces, short, stubby nose-overless landing gear, and lots of high aspect ratio wing area.

A second glance, however, does uncover a problem in the short nose moment followed immediately by the large open cockpit. First of all, the short nose creates difficulty in maintaining the balance point. Secondly, the short nose also becomes as crowded as a 15-student telephone booth by the iime you cram in an engine, tank and batteries. And thirdly, about 99 per cent of the wing sits over the open cockpit, presenting quite a mounting situation.

Be that as it may, our intrepid single-channel specialist has, with great perseverance (you remember the Great Percy, don't you?) defeated the aforesaid problems and has come up with the cutest R/C scale model to appear in a long time. Plans are 3-1/2 inch to the foot scale, having been doubled from the famous Cleveland Model 3/4 inch scale kit plans. The resulting fuselage is 3-1/2 to 4 inches wide in the cockpit..." 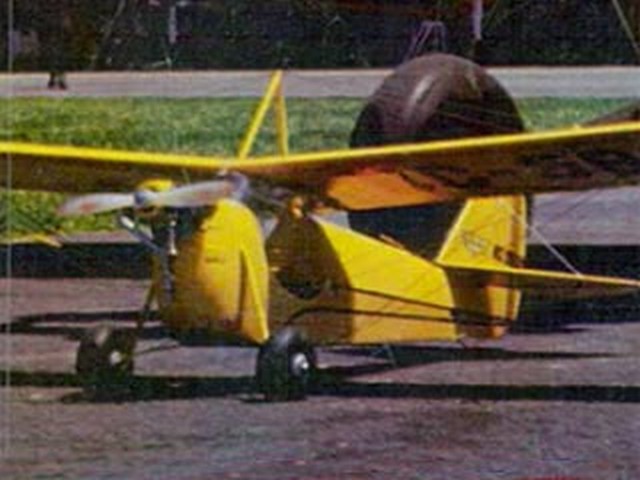