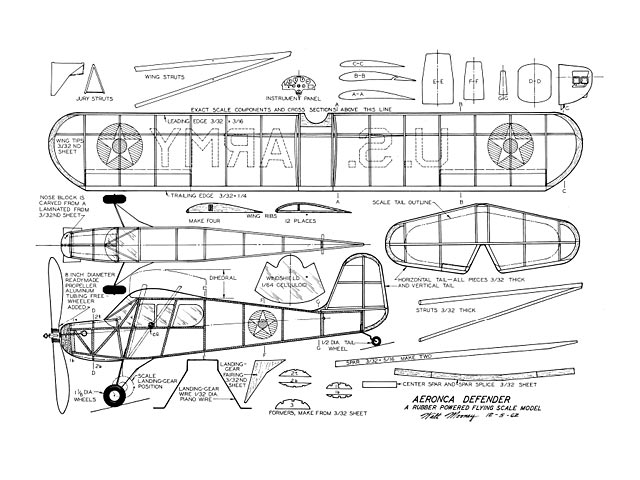 Quote: "Aeronca Defender tandem trainers were produced by the Aeronca Aircraft Corporation of Middletown, Ohio in 1941. Some, sold to the Army Air Force and designated 0-58-A, were used as 'Grasshoppers.' The model depicted in our plans is a rubber-powered version with Army markings and several deviations from scale, which are indicated on the plans. Some exact-scale details have also been provided to give the avid scale builder more information. For a scale three-view of the aircraft, see Page 261 of the Aircraft Year Book for 1942, published by the Aeronautical Chamber of Commerce of America, Inc.

The rubber-powered version is still quite realistic and has excellent flight performance. Flights of over ninety seconds have been made by the original model.

Model construction is simple and because it will appeal to younger builders, the wood sizes are 3/32 square or larger, which makes for better handling during and after construction. All wood parts are balsa and a ready-made Paulwinia propeller was used. For the simplest possible flying model struts, landing-gear fairings, tail wheel, and freewheeler can be omitted.

Start construction with the fuselage sides, which should be built one on top of the other to ensure that they are identical. Side structure is cross-hatched on the side-view plan for clarity.

While the sides are drying, cut wing ribs from 3/32 sheet balsa. Note that four ribs are solid and twelve are built up from sliced upper caps and 3/32 square bottom caps. From thin sheet metal or cardboard make a template to the shape of the upper surface of the rib and use it for a guide while slicing the upper rib caps.

When the fuselage sides are dry, carefully remove them from the plans and separate. Cement together at the rear and then add cross pieces as shown in the top view. This gives a rectangular fuselage framework. Now cut the formers 1-t, 1-b, 2-t, 2-b, and 3, cement them into proper positions, and add square 3/32 stringers in six places to give the nose its rounded shape. Sand a stick to a round cross section and add the windshield braces.

Laminate the noseblock up out of five cross-grained pieces of sheet balsa. Carve to the shape shown and add a two-lamination locater block to the back of the noseblock so it will just fit in the front of fuselage structure. Drill a hole through the noseblock and install the front motor hook as shown on the plans. If a free wheeler is desired, make it from aluminum tubing, cement, and wrap to the propeller with thread as shown. Don't forget thrust washers between the propeller and noseblock.

Bend the landing-gear wire and cement it securely into the fuselage. Install the lightest possible wheels - either wood or air-wheels. They can be held in place by bent wire, or a drop of cement. Bend the tail-wheel wire up and install the tail wheel. Build the tail surface directly on the plans. Note the grain direction shown on the sheet-balsa tips.

Cut out the wing spars, center spar, and spar splice. Build the wings over the plans. Pin down the trailing edge, then the leading edge, and then add the twelve lower caps for the six outer ribs of each wing. Slip two solid ribs over the spar splice and cement them and the center spar to the splice. Add the center-section leading and trailing edge. When this is dry remove it from the board and complete the outer panels by adding spars, twelve upper caps, two solid root ribs, and the tips. When these are dry, remove from the plans and slip over the center splice. Cement the spars to the splice, the solid ribs to each other, and the leading and trailing edges where they butt together. The wing will now have the proper dihedral for the rubber-powered model. Carve the leading and trailing edges to the section indicated at the wing-rib drawing on the plans..." 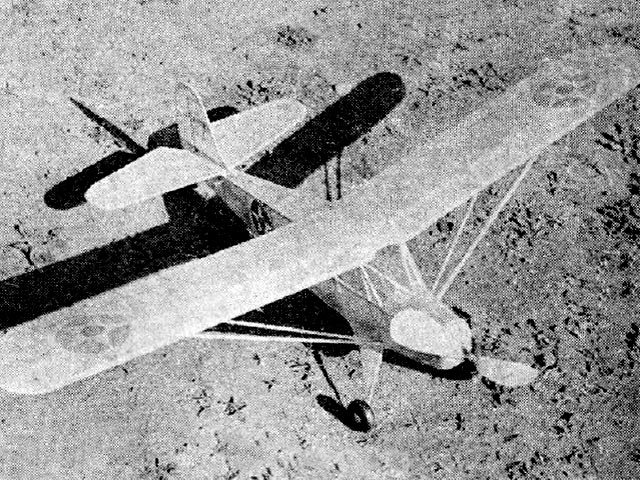 Correct date on this plan is Nov 1963 MAN, fixed now, thanks to akvose. Does anyone have a good clear scan of the article? Many thanks.
SteveWMD - 09/09/2020
Add a comment