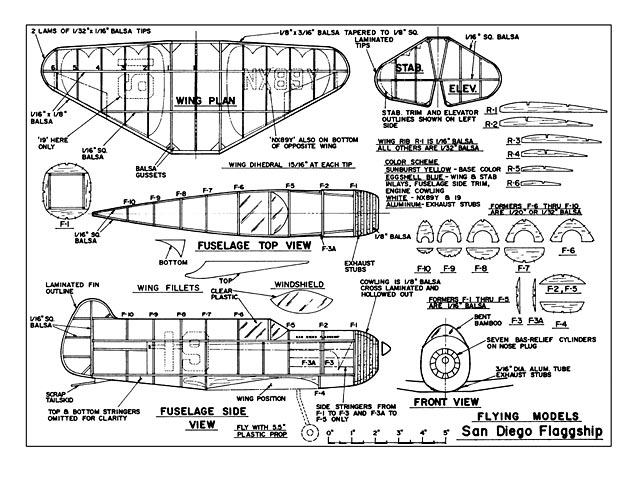 Race planes of aviation's golden age have a way of quickening the pulse and misting the eye of scale modelers. For the Walter Mitty's of the Flying Aces Club there are even two Mass launch recreations of that era, the Thompson Trophy and the Greve Trophy, the former for radial-engined scale models of 30s racers and the latter for inline types.

Who isn't familiar, by now, with the Gee Bee racers, Travelair Mystery ships. Art Chester's Jeep and perhaps a few others? But how many of you have ever heard of such esoterica as the Sundorph Special, the Haines Racer: the Rasmussen Skippy, or the Rowinski racers? There were many such ships, which, because of bad timing, had luck (often fatall, or both have remained in obscurity.

A few months ago I had the good fortune to buy a two volume history of air racing (The Golden Age of Air Racing, pre-1910), published by the FAA Foundation. PO Box 2065, Oshkosh, WI 54903, an inspiring collection of articles, photographs and 3-views. All of the old favorites are discussed but so too are many of the barely remembered race craft, including, of course. Claude Flagg's diminutive racers.

The plane was slated to be flown in the 1937 National Air Races by young Tony Le-Vier but was seriously damaged in an ill-fated qualifying run. Claude Flagg, ever the optimist, embarked on an extensive rebuilding program, replacing the original wing with a tapered version that incorporated larger ailerons. The landing gear was replaced with a retractable version, and a new, tight-fitting cowl crowned the engine. Finally, the little racer was given a livery of Sunburst Yellow and Robin Egg's Blue.

Although the reborn F-15 managed to set a new speed record for its class of over 250 MPH, it was once again damaged in a take-off mishap at the 1938 National Air Races at Cleveland and never raced again.

Building the model: The rebuilt Flaggship had a wingspan of exactly 13 feet, which in peanut scale produces a model with a fuselage length of nearly the same dimension - very good proportions indeed for a peanut, with lots of room for a long rubber motor.

Construction of the model is quite conventional, the principal challenge being reproduction of the dazzling paint scheme of the real airplane. Fuselage. This is built by first laying down a fuselage side directly over the plan and then constructing the second side directly over the first. Longerons, uprights, and cross pieces are all made from 1/16 inch square stock. Cross pieces are determined from the fuselage top view, except at the locations F6 (top former) to F10 (top former, where the formers are used..." 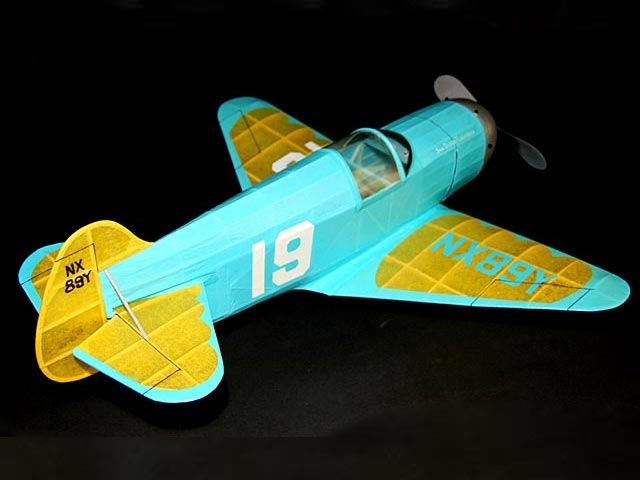 Here's a couple pictures of my model constructed from these plans [003, 004]. It was a very fun build. But I highly recommend to thin down the cowling extensively to eliminate too much nose weight. I used Dr. Martin's Acrylic Ink for the finish.
TomAkery - 19/05/2015
Add a comment