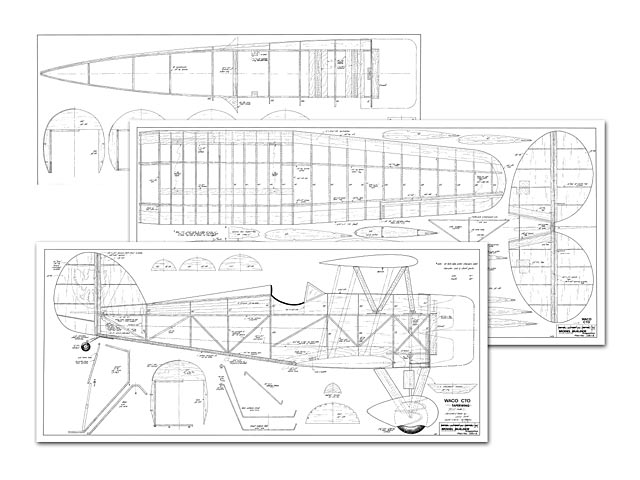 Quote: "Larry's Waco CTO Taperwing was designed after acrobatic flier Bob Lyjack's Waco, which was featured in two consecutive issues of MAN in 1975. Fine detailed Pete Westburg scale views of the ATO, which was the same airplane, but fitted with a Wright J5 'Whirlwind', 220 hp radial instead of a Wright J6, 250 hp, or larger, were featured in the August 1975 issue of Model Builder.

The model is powered by a Kawasaki 3.15 engine, weighs around 28 pounds, and at quarter-scale, spans 91 inches. Larry got plenty of thrust from a Zinger 22 x 10 prop, and had equal results from a 22 x 8 Zinger and a 20 x 10 Dynathrust. A Higley smoke system has also been installed.

The radio in Larry's Waco is a Kraft Gold Spectrum 6. using KPS-15 servos throughout. After initial flight tests, however, Larry added another KPS-15 to the elevator control, when pull-outs proved to be a little slow using one! A KPS-20M would probably handle the load. Oh yes, one servo each for left and right ailerons.

The Waco is covered with Super Coverite and finished with Randolph aircraft dope. Larry has made female molds for the cowl and wheel pants, so these fiberglass parts will be available from him on a direct sale basis.

The model has done pretty well for itself in competition. It took First Place at a static display in Waterloo, Iowa in March of '81. and a 'Best of Bipes' at Council Bluffs in April. When the flying season opened, Larry flew the Waco to First Place at Lincoln, Nebraska (Sport and Giant mixed) in May, and First again in Giant Scale at Kansas City in June... At the Milwaukee Pattern/Giant Scale meet in July, the Waco took First, and in August, at the Omahawks Pattern/Scale meet, it took Second..." 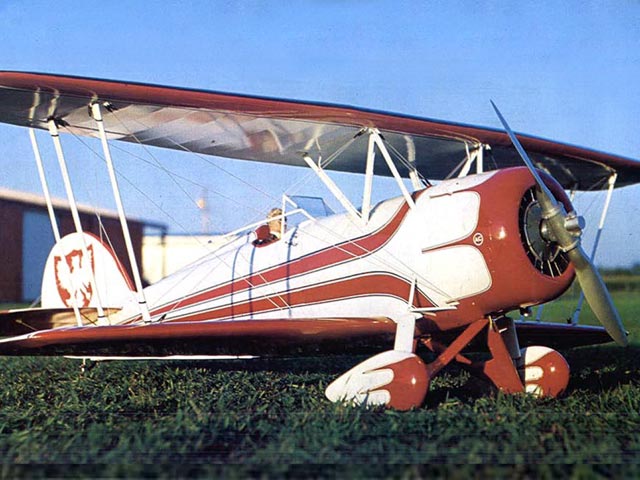 I have also attached the full text for yesterday's post, plan id 4689. I had done 2400 dpi raw scans of this beautiful model for my full attention this winter. Patrickurbain beat me to the punch with his fine scan. This aircraft model has it all, a round engine, two tapered wings and wheel pants. Who could ask for more in an aircraft! Several more photos are included.
theshadow - 02/08/2013
I cannot get them to print out correctly on my large format printer. All three sheets are different scales when printing at 100%.
Jeff - 05/04/2022
Add a comment