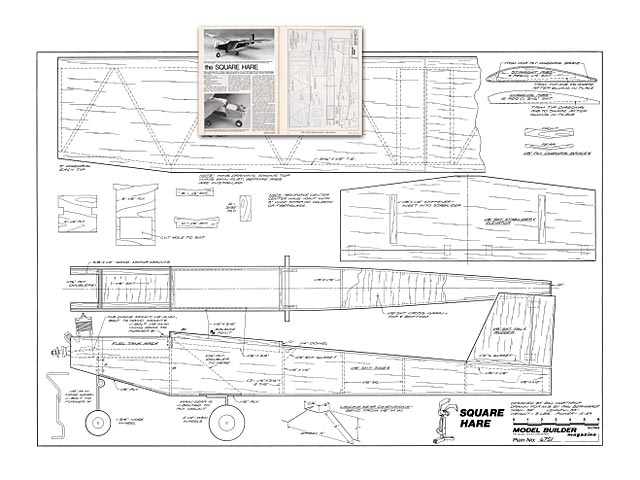 Square Hare. Radio control trainer for .15 to .29 power. Originally from American Modeler, September 1962, this is a redrawn plan from MB.

Quote: "Back in the days when trainers were really trainers, many an R/C flying field was overrun with 'Rectangular Rabbits. If it could handle Galloping Ghost, it's a cinch with modern propo. Square Hare, by Bill Northrop.

In days of old When R/Cers were bold, Cause proportional had not been invented, There were many bashes, And terminal crashes, But the pilots were most always contented.

The 'Square Hare' dates back to those days of old. It was designed and built in 1961, and published in the September 1962 issue of what was then called American Modeler. In the same issue, there were ads for Space Control and Command Control; two analog proportional radio systems. The first and somewhat unreliable proportional rigs available to the hobbiest. Prior to those systems, there was Walt Good's TTPW (Two Tone Pulse Width - also referred to as 'Too Tough to Piddle With'), pulse rudder, and 'Galloping Ghost.' Everything else was escapements and reed multi systems .

In that age, single channel was the dominant radio control system for the average modeler. Various actuating sysems were individually developed by experimenters who attempted to get more than one control from a single channel. Actuated by the radio's relay, rubber band powered escapements were the most common and manufactured item in use. Actuated by a push-button on the transmitter, there were simple sequential escapements that gave you alternating right and left rudder, there were compound escapements that gave you selective right or left rudder, and there were escapements that would allow you to select right or left rudder and up or down elevator - but only one at a time. Talk to an old timer about the fascinating challenge of radio control flying in the 'good old days.'

Early pulse rudder systems employed magnetic actuators or electric motors. A pulse box of some type or another was connected to the transmitter, and used to send pulsing on-and-off signals to the receiver, which in turn caused the receiver's relay to pulse. By wiring the actuator through the relay contact points and a separate set of batteries, one could make the actuator pulse back and forth. Connected to the rudder by a torque rod and crank system, the actuator would cause the rudder to constantly wag back and forth.

In the air, provided the rudder was pulsing fast enough (and it usually was), the airplane merely flew straight ahead not reacting to the continual wiggling. When a turn was desired, the flyer pushed one of two buttons on the control box which gave either a full 'on' or full 'off' signal to the receiver, resulting in a fully locked right or left rudder. By skillfully playing the buttons, a variety of maneuvers could be accomplished.

The next step was to have a pulse box in which the pulses could be varied from 50% 'on' and 50% 'off' to 60-40, or 65-35, or 70-30, and so on. This was fairly easily accomplished by many experimenters (you didn't have to be an electronics genius, just a mechanically inclined modeler) and resulted in a stick controlled rudder that could give you a proportional amount of turn instead of 'all or nothing.'

Then came Galloping Ghost. This term referred to single channel pulsing systems as described above, except that now, the speed of the pulse could be varied as well as the time on or off. As a result, elevator control, though slightly interacting with the rudder, could be had. A characteristic of this system, which would require diagrams and photos to describe (even when you saw one in action, it was hard to believe!) was that in 'up' elevator the system was pulsing at its slowest rate. Consequently the plane did react to the deflecting surfaces, resulting in a galloping flight path. Nevertheless, it was cheap proportional.

We hope you'll pardon the above brief portion of R/C history, but the Square Hare was developed for pulse rudder and/or Galloping Ghost, and as such, fits well into the requirements for a beginner using today's reliable 3-channel systems. Designed to withstand the rigors of experimentation and the less reliable radios of an earlier era, it will now help the beginner through his indoctrination into the great hobby of R/C flying.

The 'Rectangular Rabbit' was designed around common stock sizes of balsa and plywood. In fact, except for occasional reference, and tracing of a few parts, it can be built without the plans. The first duplicate of the 'Boxy Bunny' was built by a modeler who jotted down a few basic measurements on a piece of paper during a Saturday after- noon flying session. He came back the following. weekend with the completed model, his first R/C ship!

It's a bit much to brag about one's design, but we have talked to a multitude of modelers over the years since the Hare was first published, and it's surprising how many had cut their R/C teeth on one. The most recent Rectangular Rabbit reminiscing took place at the Seattle WRAMS trade show when we met a Canadian modeler who told of his 'Hare' raising experiences some years ago.

The ship is extremely rugged, yet light (an even 3 pounds, ready to fly), is inherently stable, and can be flown at moderate speeds throughout the mod- eler's early flight training. For this period, it is also advisable to move the balance point about 3/8 of an inch ahead of the mark shown and use minimum control surface movement. Once the flier has gained confidence, move the balance point back, increase control sen- sitivity, open up the throttle, and watch out! Wanna do a 2-1/2 turn snap roll followed by a spin - in either direction? Get some altitude, pull the nose up, then slap the stick into either back corner of the box.

Engine size can vary from .15's to .29's. For the beginner, a throttled back .19 is more than adequate. Our Enya 19 R/C gives a good range of power. A .29 gets you into the 'bomb' category, but then, some R/Cers prefer to 'aim' their aircraft rather than fly them. Since Square Hare may appeal to the completely raw beginner in modeling, as well as to the newcomer to R/C, we'll try to be fairly detailed in building instructions.

The full size plans show actual shapes and sizes of parts, however, being true to its name, the major parts for 'Boxy Bunny' can be marked out directly on the wood itself, with no need for cutting up the plans, or making meticulous tracings. Get yourself a ruler, a small carpenter's square or drafting triangle, a soft pencil or ball point pen, and you're in business. Read the instructions through before beginning actual construction..." 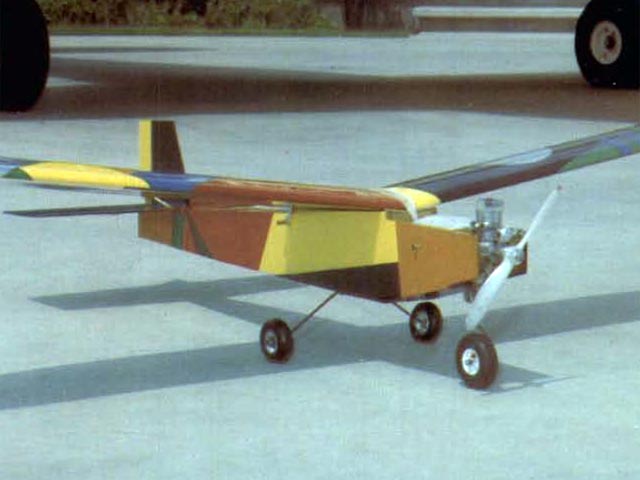