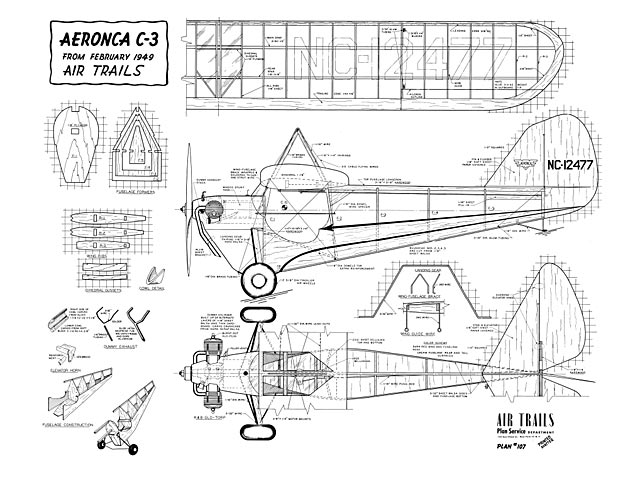 Quote: "SHE was known as the 'Flying Bathtub'n the old days. Yet today there are still a few putt-putting around the country after more than fifteen years' service.

The original C-3's were built in 1933 and our model is a faithful replica even to the dummy cylinder, exhaust manifold and all the flying wires. When compar-ing flying performances, however, the real ship isn't in the same class because the model executes consecutive outside loops and vertical eights as smoothly as any stunt ship. Inverted flight is a snap regardless of the high wing and dihedral.

Some of the free-flight boys say it's a crime to put lines on such a natural free-flight scale model. They have a point, for one could search a long while for a better-proportioned scale job capable of stable flight without lines. For those wishing to make a free-flighter of the Aeronca I would recommend substituting a .19 displ motor, building up the tail surfaces and changing the wing section shown to a Clark Y.

The construction is standard throughout most of the ship making for an easily-built model. Cut formers 2, 3; 4 & 5 from 1/8 sheet and assemble on to the 1/8 x 1/4 longerons, making sure they are slanted cor-rectly according to the side view. Now cement the %2" sheet sides to these formers. Cut former #1 from a piece of 1/8 plywood. The motor mounts are gluyed solidly to this former and allowed to dry... " 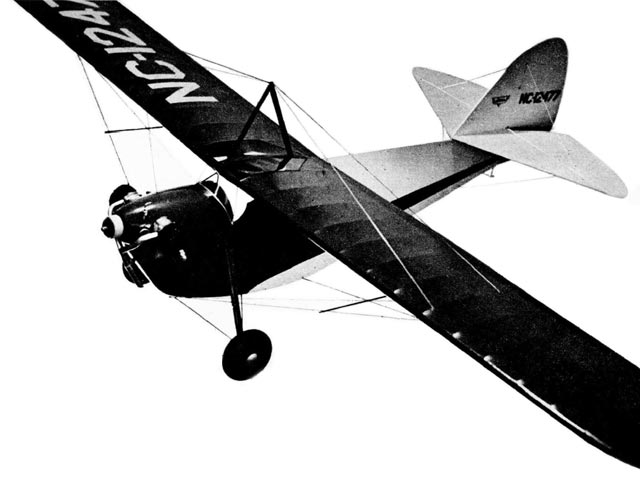