Quote: "Control Line by John Thomson. Building a Classic. Old Time Stunt continues to grow, a handful of manufacturers turning out excellent kits for a variety of subjects. This month's column includes a mini kit review for an old favorite, the All American Sr.

Old-Time stunt is an event that attracts fliers and spectators for a number of reasons. The planes display the beauty and craftsmanship associated with precision aerobatics. They also offer the classic lines of the pre-1952 era of control line model aviation that produces nostalgia among the old-timers of the hobby and an interest among those interested in its history.

That's why, as noted in this column in the past, there is a good supply of kits being produced for some of those old designs. That's good for competition because it of-fers an opportunity for fliers to participate without having to build from scratch.

One of the most distinctive of the old-time stunt designs is the All American Sr, a Hal deBolt design kitted by Dmeco in 1951. This model is available in kit form today from not one but two manufacturers. Some time ago we had occasion to acquire one of each.

We reviewed the general differences in the two kits in the September 1992 column, observing that both appeared to be excellent in quality, though slightly different in manufacturing approach. Both offered updated plans with contemporary construction notes. We noted that the Golden State Models kit offered precisely sawn parts but wood of varying quality, while the Flite Line Products kit offered die-cut parts and excellent wood. Since that time, Golden State Models has changed hands, and the new owner, Bob Ellis, sent us an updated version of his company's All American Sr. kit.

We promised in that 1992 column to offer some impressions of actual construction of an All American. To provide that insight, we turned one of the kits over to a member of our 'panel of experts,' Jim Cameron, and asked him to offer his impressions of the building process. The kit selected was the updated Golden State Models kit; we're hoarding the Flite Line kit for future construction in our own workshop.

A number of fliers have observed that the All American is a plane that needs to be built in a particular sequence for best results. Our timing in asking Jim to talk us through construction of the All American was perfect - he was just about to start building. What follows are his construction notes:

First impressions. I like to see full-size plans; this kit has a nice, easy-to-read set. The hardware package contains a nylon bellcrank and control horn; leadouts and dural landing gear struts are also included.

Parts looked to be stacked and cut on a bandsaw, which gives a very accurate set of ribs. As with any stack of symmetrical ribs, don't take the stack apart before marking the top of each rib with a felt-tip marker. I also number each rib so I know they will sit in the wing just as they were in the stack. If one rib gets flipped, it could cause a warp.

One thing that might cause a beginner some problems is that there are no step-by-step instructions. In a note from Golden State Models, some things to remember were discussed, including: You must know how to read the plans. My suggestion is to take your time and think what your next move will be before you put glue on any parts. Golden State's notes also warn the builder to cut the holes for the leadouts before sheeting the leading edge area.

I replaced the pushrod with 3/32-inch music wire. The kit had 1/16-inch wire, which I felt would flex. I also added support for the bellcrank platform over and above that shown on the plans.

A note about the leading edge. I put the 3/32-inch leading edge sheeting on the ribs first, then sanded the front flat to accept the 3/8 x 1/2 leading edge. The kit does not have V-notches in the ribs.

Fuselage. A good idea with any plane you build is to do a dry setup of the parts, engine and tank before you glue anything. I found that my tank would not fit with the formers supplied, so I had to cut two new ones. I also added some extra fuselage formers in the area of the leading edge/ fuselage joint.

Elevators. I like to put some 1/64-inch plywood under the control horn to prevent the horn from digging into the balsa. I also added a rib support, which can be seen in one of the photos.

In conclusion, it is my opinion that unless you are a good scratch builder, you could not do better than this kit. The wood selection was very good." 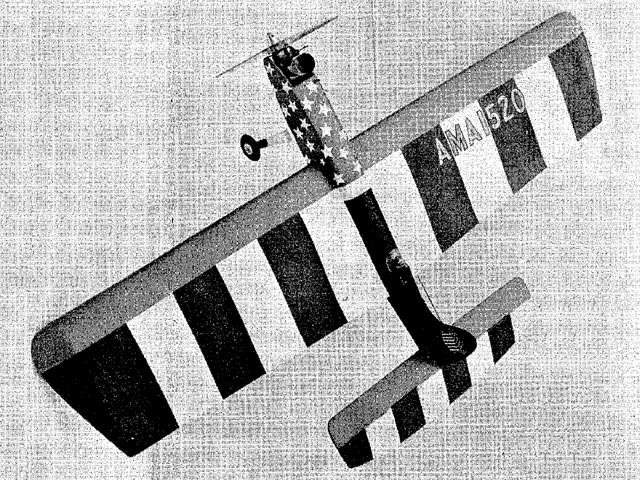