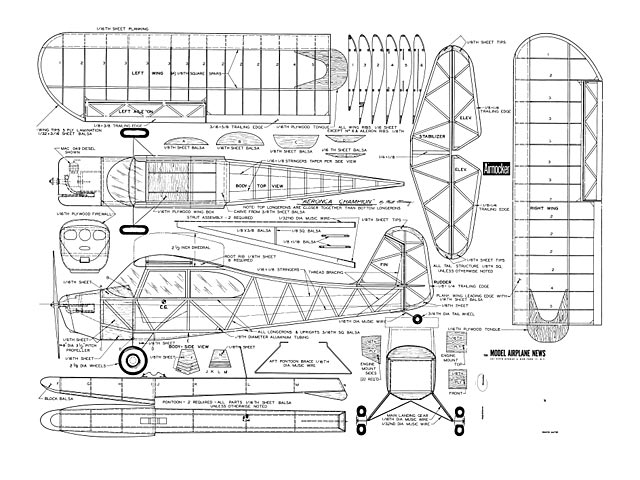 Quote: "On land or sea this flying scale model for .049 power is as real as real can be. Hundreds of successful hops. Airnocker, by Walt Mooney.

Why make the Champion? To come right to the point, the following reasons explain why the Aeronca Champion makes a perfect flying scale model.

The full-sized airplane is very easy to fly and, I guess, every pilot likes to build a model of a plane that he has flown. The 'Airnocker' is common enough so that details are easy to study first hand. It is fabric covered so that true scale appearance with a light flying weight is easily obtainable. It has the right aerodynamic setup to make a fine flying-scale model. That characteristic orange-bellied 'color scheme is impossible to mistake for a Cub. Convinced?

The original model shown in the photographs is over two years old. It has been flown in two contests, taking second in a field of 16 in San Diego, and seventh at the last California Nationals. It has also been flown as a sport ship several hundred times with and without floats. On wheels, it glides flat and climbs steeply, typical flight times being 2:33 on a :35 engine run and 3:30 on a :49 engine run. With floats, take-offs are snappy and the landings are real pretty. Water take-offs work best in calm weather and with maximum power.

The model is exact scale with two exceptions: these are increased dihedral and a slightly enlarged horizontal tail. People familiar with the free-blown bulgy windshield on some of the real Champions will complain about the one on the model, but the windshield shown is scale for some Champions (not all of them had the real bulgy windshield) and is much easier to model. The floats are definitely not scale floats but they are semi-scale and have the right relative size. They were designed to work well on a model.

Construction. The wings of the Aeronca Champion model have the scale number of ribs and, in general, scale structure. They are relatively straight-forward as far as construction goes. Care must be taken when cutting out the slots in the three inboard ribs for the plywood wing tongues, in order to give exactly the same inciderice angle in each wing. The wing tips are laminated from five plys of 1/32 x 3/18 balsa. A form block is cut from boxwood scrap to the inside con-tour of the tip, then the balsa plies are coated with cement and formed around the block..." 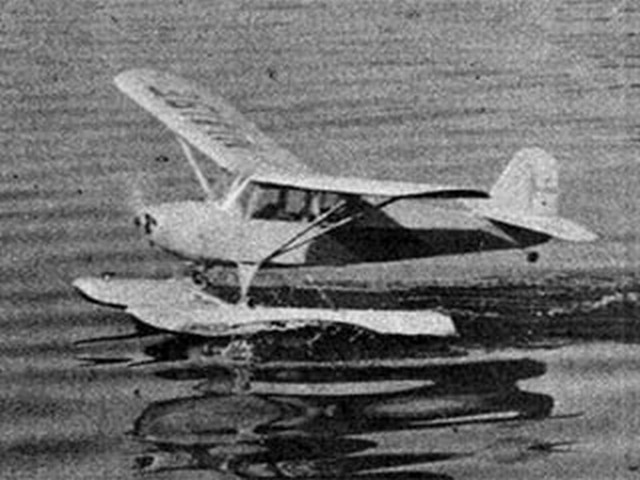