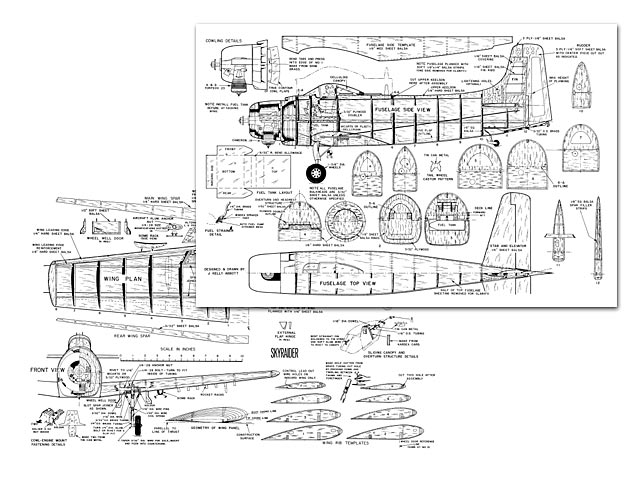 Quote: "Built around the .79, rather than the bigger .29's, this Douglas AD-1 follows authentic plans. It's light; a proven performer. Douglas Skyraider, by J Kelly Abbott.

Many Skyraider models have been built and flown in the past two or three years, but, in most instances, they were designed for the Class C and D engines. Having built several models of the large variety previously, the writer decided to try one employing a Cameron .19 engine for power. An Enya .19-powered model performed equally well, having the same flight characteristics, although the Enya was much heavier.

This model was scaled from authentic drawings of the full sized aircraft with very few changes. For instance, the airfoil section at the wing root was flattened out from the main spar aft to the TE to aid in setting up construction on a flat surface. The built-in variable incidence in the wing was retained for stability at slow speeds used in the Carrier event. Other deviations were the elimination of engine downthrust and addition of about 1/8 in to the TE of the elevators for more positive control. This model was designed with the following points in mind:

The model retains many of the flight characteristics of the actual airplane, the most noticeable one being that it flies with a tail-high attitude in full-powered level flight. For smooth take-off the control is held in neutral. It handles well in low-powered conditions and will glide to a smooth landing with no power by holding the nose down slightly.

In general this model is of conventional construction and should not prove too complicated for the average modeler.

The wing is built with two parallel spars and the two halves of the wing are connected by spar joiners which extend from rib No.4 on one side to rib No.4 on the opposite side. The spars are full depth and notched to receive each rib. The forward spar is cut from 1/8 in and the rear spar from 3/32 in medium or hard balsa as are the corresponding spar joiners. The ribs are of 3/32 medium balsa and the wing covering (skin) is 1/16 sheet balsa, installed in three sections, top and bottom.

The spar halves are attached to the plan view of the wing on a flat working surface. Block up the tip ends 3/32 in to clear the lower curve of the outboard ribs. Cement two No.1 ribs together and insert into No.1 slots in spars with flat lower edge against the working surface. Progressing out-board, install remaining ribs, carefully aligning the lower edge of each rib with the lower edge of both spars. This should be easily accomplished if notches have been care-fully cut. Note that the forward portions of rib No.'s 2 and 3 are installed at an angle and are left out until after 1/8 balsa LE strip is in place.

After all ribs have been cemented into place, cut LE strip and install along flat nose of ribs and insert forward portions of rib No.'s 2 and 3. The next step is to cover the upper surface of the wing from the TE to the center line of the forward spar while the assembly is still attached to the working surface, to maintain alinement. This portion of the covering is done in two sections, one from the TE to the rear spar and the other from the rear to the forward spar. Leave the forward portion uncovered..." 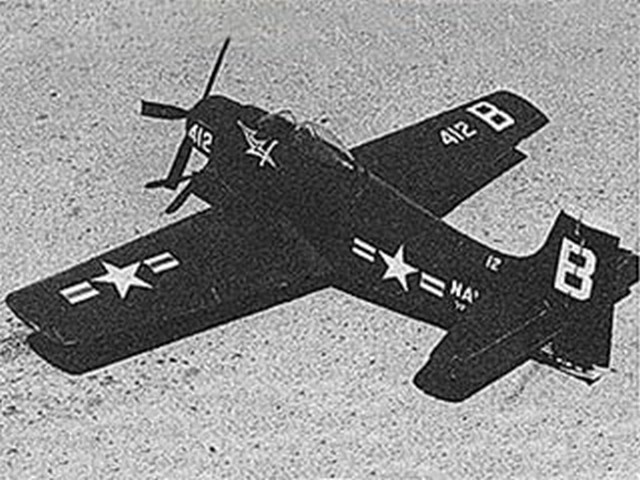