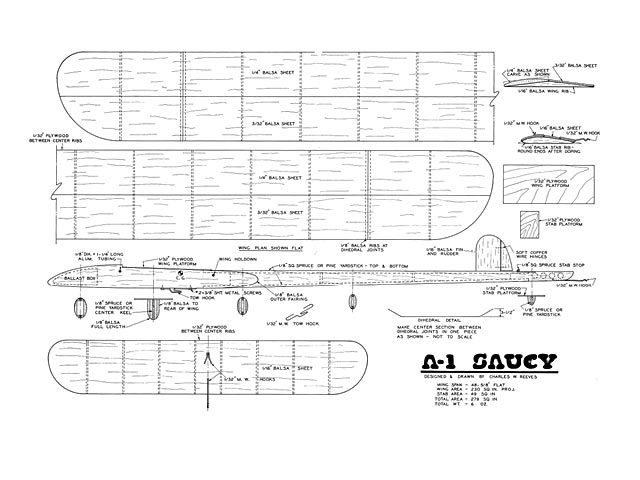 Quote: "Simplicity was the design keynote for our Saucy little towliner, this coupled with rather nice lines and good flight characteristics makes our soarer a must for the beginner! A-1 Saucy, by Charles Reeves.

Let's start out by assuming that everyone is as lazy as I am, although I'd hate to accuse anyone of that. If you do happen to be that lazy, then this is a model which you should like. It is a model which I think you will like if you are new to the model building game and get a little shook when you look at other glider plans and see seventeen thousand two hundred and sixty-five tiny wing and stabilizer ribs which go into a wing and stab with twenty-two 1/16 in square spars. Well maybe I've exaggerated a little bit, and I hope no one is offended by it, but I have tried to create something which could be built by someone who has no experience with Jap tissue or lightweight silkspan and does not have the experience necessary to build and cover the highly under-cambered wing of the first class contest towline glider.

I first became interested in this type of construction when I saw an article in the October 1960 MAN on the Tempo (oz9645) an A-1 glider which featured this type of wing construction. Then in the May 1961 issue of MAN there was an article by Gerald Ritz on the all balsa A-1 glider wing construction which was developed by Erick Jedelsky of Vienna, Austria, and which has been named after him. If you are interested in finding out the theory behind this type of airfoil this would be a very interesting article for you to read. If you are a beginner to model building (and it is for you that this article is being written) then you probably will not have this magazine. However, if you look in the classified ads in the back of most model magazines you will find people who have old magazines for sale, and they just might have this one. It is from this article that the airfoil for the 'Saucy' was developed.

In beginning the construction, I like to start with the wing since it, in my opinion, is the most important part of the airplane. First cut a triangular wing rib pattern from 1/16 plywood or fropm a popsicle stick..." 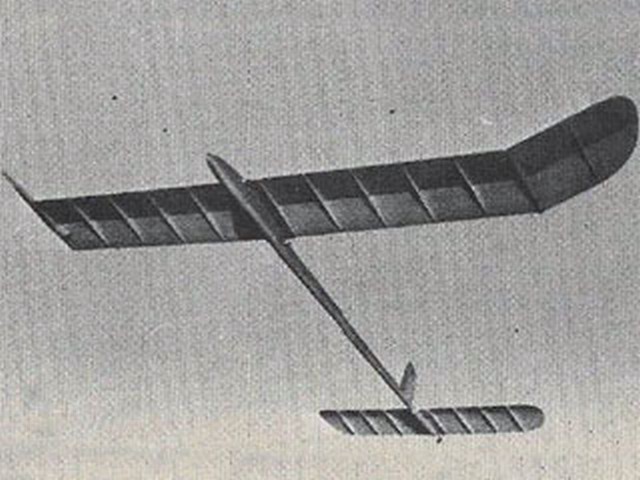