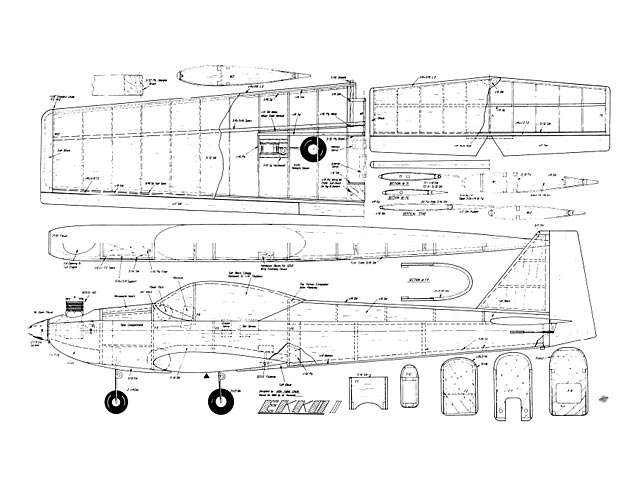 DEVELOPMENT of competition aerobatic designs has been moving toward fast-flying and large aircraft during the last few years. This design trend has been made possible mainly by the availability of extremely powerful engines, but an altered view on acrobatic flying in favour of large patterns also has contributed to this progress. There is no question that high speed and graceful manoeuvres are more effective in gaining maximum points than corresponding figures of more compact size performed with a slower flying machine.

Ekko III is a fast, smooth-flying aircraft, capable of contest performance. Although the model has been designed and developed primarily for competition purposes, it is an easy plane to fly, and can be handled without difficulty by anyone who has flown similar aircraft successfully. In the design approach, performance considerations were naturally put in the foremost place, but functionalism in combination with a realistic appearance were also set as basic goals. You will notice, from the plans, that Ekko III is a sound design with the emphasis on uncomplicated construction methods and general simplicity.

The similarity feature so evident in current competition acrobatic models is entirely the result of the standardi'ation reached by pattern flyers in their endeavours to attain design perfection. The fact is that, within the frame of given performance requirements, there simply is not much !eft in the way of an entirely new layout! In addition, it would be impossible to create a new competitive aircraft today without borrowing ideas and good points from other designs, and this model is no exception. Nevertheless, efforts were made to provide Ekko 111, at least in some extent, a "personal" look which, mainly, is characterized by its huge scale-like canopy.,

Since I am not an ardent competition flyer but rather prefer flying primarily as a pleasant pastime I have so far not entered any contest with the model. Therefore I have no competition merits to refer to at this moment, as might be expected from design presentation of this category. However, backed by a long standing experience in designing and flying of radio control aircraft, and after a great deal of testing and comparison with other outstanding pattern models, I have come to the conclusion that Ekko III itself possesses performance capabilities comparable to top competition acrobatic aircraft flying today. After all the design concepts follow in general well known and tested conventions. In addition, a number of good ideas from other proven designs also have been incorporated in the final layout.

The original model employs KDH retractable landing gear, and this system is shown on the plans. There is no doubt that retract gear is a necessity for precision acrobatic flying today, despite the problems still connected with many units that are currently available. Fixed landing gear can of course be used, and actually is recommended, if the model is not intended to be flown in competitions. The comparativeiy limited loss in performance with a fixed gear can very well be accepted by a sport flyer..."

Quote: "Todays submission, Sadly although RM had full page plans at times, the quality of the galley photography left much to be desired. The step line in the plan is as scanned, so the original must have been constructed from two photos. Regards,"

Update 09/01/2020: Replaced this plan with a clearer copy (from MAN) thanks to Circlip. This one is much easier to read. Have accordingly changed this listing around to show the plan as from MAN, not from RM as prev listed. 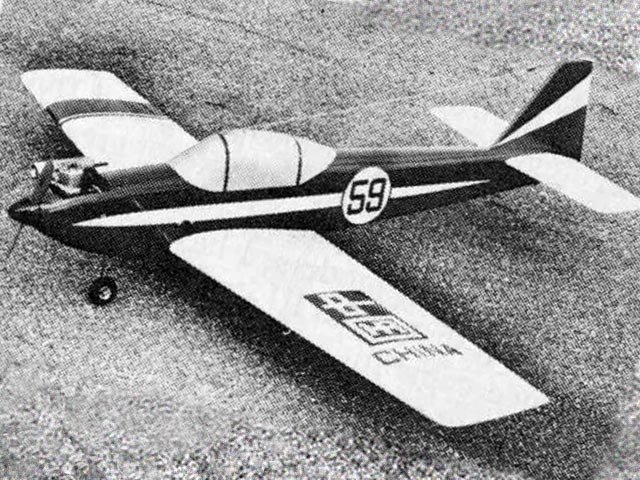 The Ekko III was originally published in Model Airplane News April 1974 issue. It includes better pictures and first rate plan printing. Unfortunately I can't scan the material because my issue has been bounded to other issues of that year and I cannot straight and flatten the pages for good scanning.
Best wishes,
Eduardo - 08/01/2020
Add a comment