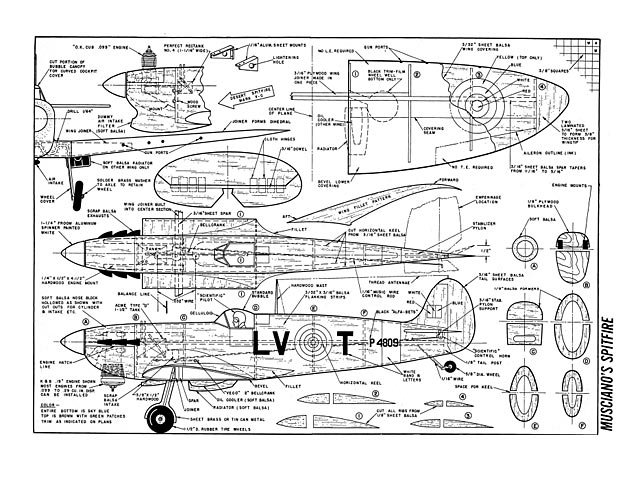 Quote: "For the first time, you can build same-scale control line flying replicas of three top-notch World War II fighters; this trio will make a fascinating project for your club or contest flying.

Triple-Threat Treat (cont.) Vickers Spitfire Mk-2. This hero of the 'Battle of Britain' was the result of many years of research and experience with high-speed aircraft. Reginald J Mitchell, who designed such famous planes as the Supermarine S-6B, literally gave his life in designing the Spitfire. So certain was this engineer of the war to come that he realized the urgent need for a super fighting plane and therefore spent countless sleepless nights at his drawing board in order to complete the design. This effort so undermined his health that he never lived to see the plane in action.

Even though the number of Spitfires available at the 'Battle' were few, they were sufficient to occupy the Messerschmitt protection and thereby allowed the older Hurricanes to get at the German bombers.

Power of this fighter ranges from the 1050 hp Rolls-Royce Merlin to Rolls-Royce Griffin of over 2000 hp in the latest models including Mark Twenty-five. The 'Mark Two' is probably the most famous and was used in the Battle and throughout the war in all theaters. These and subsequent modifications were utilized as desert fighters (see plans for desert fighter air filter nose modifications) ground attack planes, carrier fighters, cataplanes (without landing gear), high altitude interceptors and on reconnaissance missions as well as for bomber escort.

Speed is generally considered to be in the neighborhood of 365 mph and up and, although the ceiling is considered to be not more than 45,000 feet, the records show that a Spitfire once reached 50,000 feet in an attempt to clown a German high-altitude reconnaissance plane! Just think, this plane was on the drawing boards in 1934! Armament began with eight machine guns. This has been altered to two cannon and four guns and then to four cannon. It can also carry two 250-pound bombs. In both performance and appearance the Spitfire is one of the world's most beautiful airplanes.

Our 3/4-to-the-foot scale model is perfect with engines from .099- to .19 for sport, and will take a .29 for some speedy flying. Construction is rugged and the model will fall together with ease if instructions are followed..." 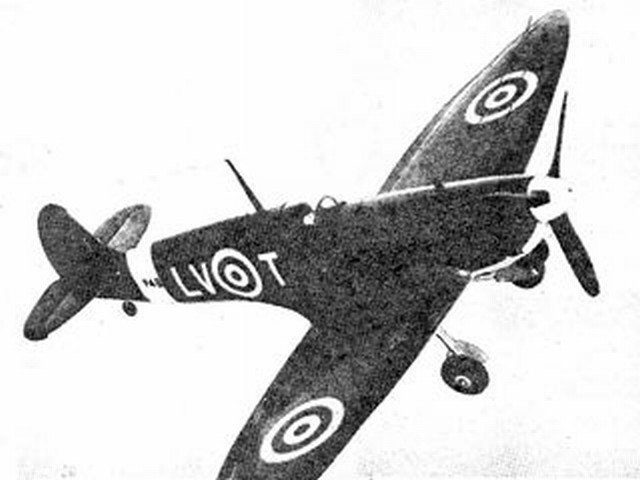 The plan is from an Air Trails magazine, I think an annual in the 50s. It was part of an article with a Spitfire, Me-109 and P-51. I have the magazine and the plans, if I can dig them out I'll give you dates, and later I'll try and get the plans scanned. Regards,
TimMcCoy - 09/09/2013
Add a comment