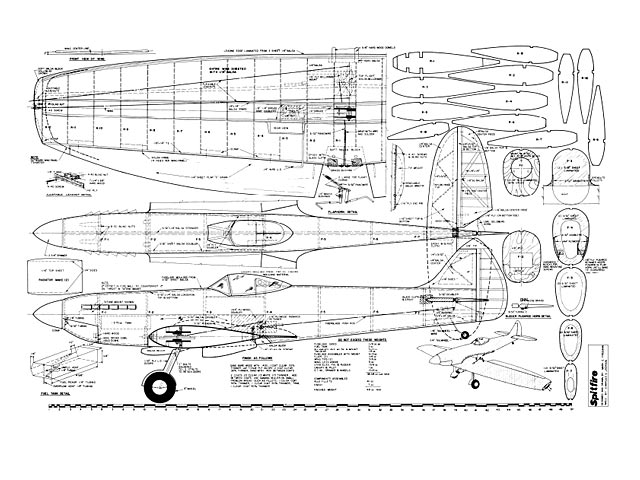 Quote: "It was a Spitfire Mk. XVI, a late production Spitfire made toward the end of WWII. This late production Spitfire had to be one of the most beautiful planes of its time. Having built Al Rabe's Mustang (oz6372) (June 1969 AAM) and applying his ideas to a FW 190 of my design, I felt the Spitfire would be an excellent super-scale stunter. It would have to be done right, however. This meant a tail moment arm three in. longer than I had ever used before and a low wing with dihedral.

Al Rabe gave me some suggestions, one of which was to go to the clipped wing version. This would give greater wing area for a given span as opposed to elliptical wing tips. I decided to use Al's new improved Bearcat (oz5171) airfoil, much, much larger flaps, a removable wing, variable ratio flaps and elevator, and a radial engine mount, in addition to the adjustable leadouts and movable adjustable rudder featured on the first ship. Also added later was a removable outboard wing tip to adjust tip weight, and an adjustable length pushrod. The overall size was reduced to a 57in wingspan, this being a more reasonable size for stunt.

Al suggested a molded balsa fuselage to save weight. This seemed formidable at first, but it was easier to do than I had anticipated. The result was beautiful - two perfectly formed fuselage half shells each weighing 1-1/2 oz. Once these were made, all I had to do was add the fuselage bulkheads, glue the two sides together and the greater part of the fuselage was done.

The Spitfire's only handicap is 8oz of excess weight. With the design refinements made in the plans, plus the table of weights furnished (based on the original component weights) and the right wood, a 50-oz Spitfire should be possible. This is my goal for my next one and should be yours if you build one."

Quote: "In constructing the Spitfire I must stress the importance of selecting the lightest wood. All balsa should be four to six lb in density. Also, you must use immaculate building practices. Use glue sparingly and fit components accurately. Neatness makes for sturdier construction and lightness.

The fuselage was molded from 3/32in balsa sheet on two wood forms. These are cut and shaped from two pieces of soft pine or redwood each measuring 2 x 6 x 39in. The two blocks are keyed together along the top view centerline of the fuselage with two 3/8 dowels (make sure the sides mating each other are flat and uniform). After the two sides are keyed together, trace the top view of the fuselage onto the blocks using the seam between the two as a centerline, then cut to shape using a bandsaw. Take the two halves apart, pull out the dowel keys, draw the fuselage side view on each half and cut these out. Key the two halves together with the dowels and commence shaping with a wood plane. This whole process only took me six hours

Soak 3/32 x 8 x 39in balsa in hot water approximately 30 min. Place the balsa sheet on one of the forms and starting at the center wrap with surgical gauze from the center to each end. You probably won't be able to get the balsa near the nose at the cowl location to fit down perfectly since this is a tight bend. If this is the case, just trim this part away and mold the cowling separately later. Repeat the process for the other side and allow about two days drying time before cutting the gauze and removing the shells from each mold. You will then have two perfectly formed fuselage shells each weighing 1-1/4 to 1-1/2 oz..." 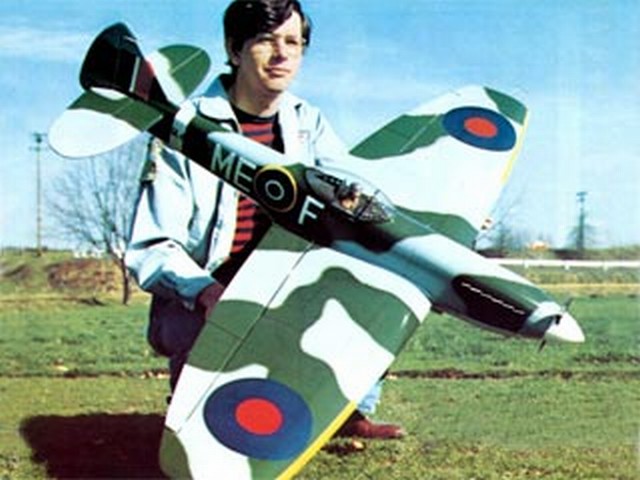