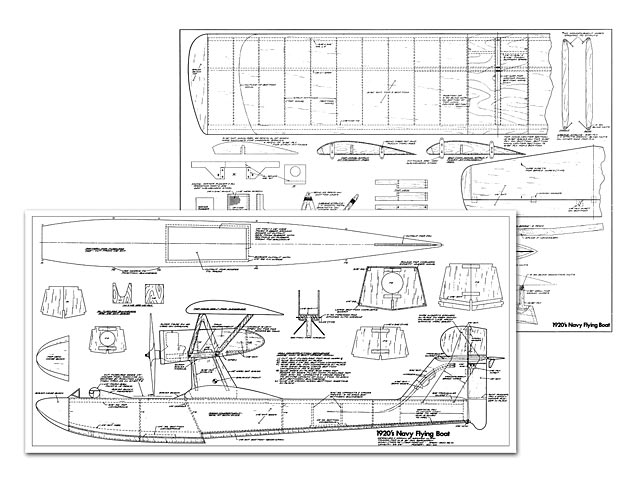 Quote: "1920s Navy Flying Boat, by George Clapp. This model looks just about like any Navy flying boat you might have seen back in the early 1920's (if you happened to be around at the time) and flies in the same lazy manner.

US Navy flying boats of the World War I and twenties era were many, and varied greatly in plan form. There were two general types, one similar to our model, and the other with hull and out-riggers to the empennage, such as the Curtiss NC4 of transatlantic fame. But I think it's safe to say that all were biplanes with rigging far more complicated than this non-scale subject.

About 1964, MAN published Ken Willard's Little Swell (oz821), a monoplane flying boat. Right away, I saw the possibilities of making it into a boat such as I had been thinking of building.

The hull of a flying boat can take considerable experimentation and building trial and error before you hit upon the right design. After reading that this was Ken's third try, I decided to stick with his hull design and blow it up two times in size. The rest of the ship is my idea of a composite of all of these great old Navy Flying boats. Also, it is of great satisfaction to see it lumber along until it hits that last ripple and becomes air-borne. It then cruises around with no great performance, much as those ships did. There is little doubt that it could stand a 60 for power, but I preferred the challenge of a strong 40, such as the Super Tigre hall bearing rear valve it now has, for realism.

HULL CONSTRUCTION: The hull is quite simple to build, with 6 steps clearly shown on the plans. It should be noted that the top view lines represent the exact shape of the top piece of the hull.

1. Use the top pattern right off the plans. As the top of the hull is flat, it makes an easy foundation for building the hull upside down.

5. Make outside skins from 1/8 inch medium balsa, using side view as pattern. Note 1/4 inch excess added to top. Top will then have to be fit to allow for angle of sides of hull. This will make a gentle curve on the top of side pieces. Sides are then glued in place. Now add 3/16 sq hard balsa cross pieces. These should be two to each bay between bulkheads, except between F-2 and F-3, where one is enough.

6. Bottom is then layed on, cross grain, for strength. Add block to nose and sand entire hull to shape. Then add block for wing to butt against at front, and pilots' head rest (two pilots)..." 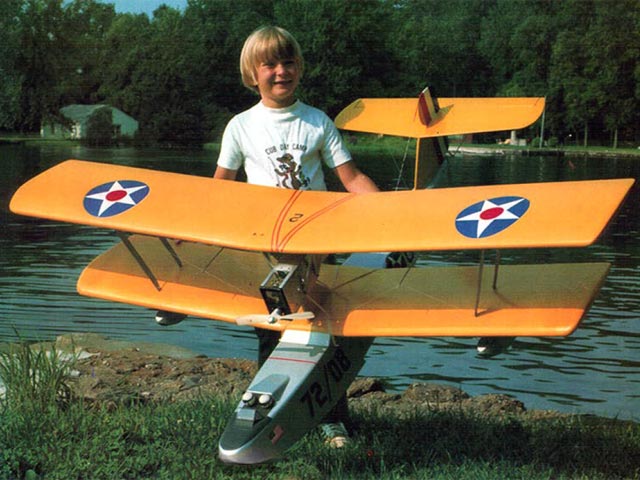 Thought you might like some photos of George Clapp's 1920's Navy Flying Boat [pics 005-009]. This is the original prototype model that is in the 1975 magazine shots. I came into possession of this model some 17 - 18 years ago and was asked if I would be interested in putting back into flying condition so some video could be taken of it in action. It was in surprisingly good condition for its age.
I rebuilt the engine pod due to years of fuel and oil making it quite oil soaked and soggy. The old rear rotor Super Tiger 40 was removed as it had some carb parts missing and a Como 51 was substituted. The Como 51 has plenty of power for this rather large plane. I also installed new servos and made up a new cowling from tinplate and brass bits. Flown at several float fly's since.
Regards,
Mike Foster - 28/09/2020
Add a comment