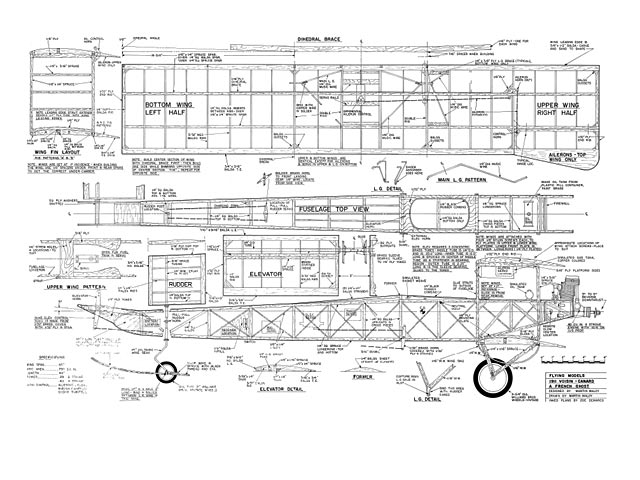 Quote: "Build this 1911 Voisin , the 'French Ghost', by Marty Maloy. This design of yesteryear features concepts as new as today. It's not for beginners but any with moderate experience will enjoy its difference.

Inspiration for an R/C version of the 1911 Voisin Canard came from watching Don Srull fly his magnificent rubber powered model at Geneseo in July '93. Stable and well behaved under power, plus a good glide showed that with some care a good R/C plane should be 'doable'. A chat with Don provided the necessary encouragement.

Don's Peanut Scale plans for the hydroplane version (Model Aviation Dec '85) were obtained from good friend Peter Money. These were copier enlarged to an 18-inch wingspan and then all dimensions multiplied by 2.5 to get a 45-inch wingspan. With the outline established, the fun of designing an RIC sport version began!

Gabriel Voisin built and flew a number of pusher biplane canards in various configurations between 1911 and 1912. This model is very much like the 1911 layout of the so-called French Ghost. The only departures from scale are in the forward landing gear (for rudder steering) and use of a cylindrical upper wing fuel tank to hide the aileron servo. It was necessary to learn some things about canard design so I bought Andy Lennon's and Don Ross' books which any serious modeler should be aware of. They are critical!

The neutral point (NP) was calculated using the standard formula: N = Foreplanes area/Total wing area x A where A is the distance from 1/4 foreplane MAC to 1/4 wing MAC (Mean Aerodynamic Chord). N is measured from 1/4 wing MAC forward.

In this plane it is about 3/4 of the way back in the open cockpit. The center of gravity (CG) should sit about one inch or so in front of the neutral point or about in the middle of the cockpit. If the CG is too far forward, the plane will tend to drop its nose when you cut the throttle back. If the CG is behind the NP you will have an unstable aircraft!

The other critical items are foreplane incidence and engine thrust line. The undercambered wings are set at about +1°. The foreplane neutral setting should be +5°. The entire foreplane rotates for pitch control; about 1/2 inch up and 1/2 inch down at the trailing edge. The engine needs 3° to 5° of upthrust (reverse downthrust) in order to load the foreplane properly for good control. A 4-cycle .40 provides plenty of power and the right sound. Use a 10-6 or 11-5 prop.

People love to watch this plane fly and it's not too difficult to build so let's get started. Since you have probably built several R/C planes I'll skip the basic stuff and just discuss the tricky parts, none of which are really that difficult. Study the plans.

Let's start with the foreplanes. They contain a common 1/4-inch piece of brass tubing about 25 inches long. You need two more pieces of concentric brass tubing - an inner one to glue in the center for added stiffness and a short, outer one to bridge the yokes and act as a sleeve bearing!

Build the right foreplane first, add the sleeve bearing, then slide the assembly to the right and build the left foreplane. Note the shim used to raise the spar (for undercamber), the four 1/4-inch balsa end ribs, next to the 1/32 ply sheet ribs, add a little more area to facilitate covering.

The basic fuselage is a box. Lay out both sides at once and use spruce longerons. The only formers are on the forward turtle deck. Assemble the 'box', then add the ply yokes.

Add the inner nose balsa plates and cover with 1/32 ply. Add the balsa outer plates for appearance. Carefully locate the hole for the brass tube (1/2-inch ID) thrust bearing for the rudder..." 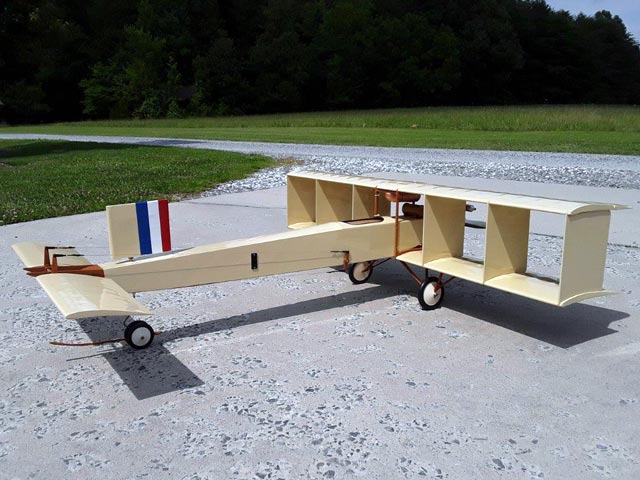 Here are some pictures of my 1911 Voisin Canard [main pic, more pics 003,004]. This was an interesting build with the wings having 'under camber' airfoils. I used a .54 4-cycle engine for power, which was great for takeoff, but unfortunately I was never able to get her back down on the ground in one piece following a hair-raising 5 minute first flight. This plan DOES NOT glide once the engine stops.
Larry Nieman - 02/03/2020
Add a comment