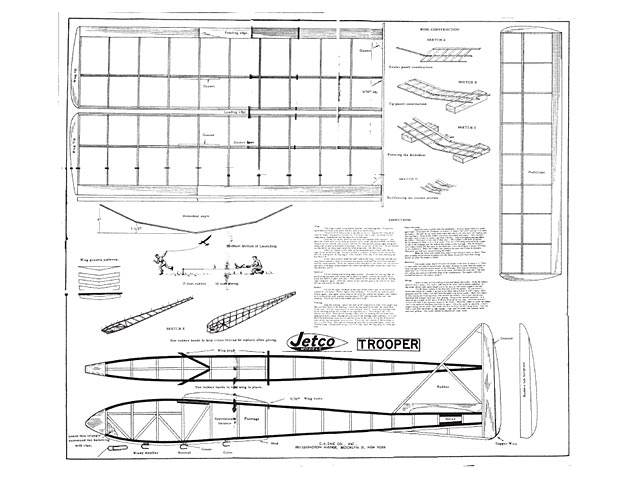 Trooper. Towline glider plan. This is a low resolution plan.

Added s a modern redrawn plan in PDFvector format, including formers, thanks to PaulBrad.

Quote: "Here is my CAD redraw of the original JETCO kit plan for the Trooper. The kit lists the wing span as 30in. The flat plan layout has the span at 30-3/4in." 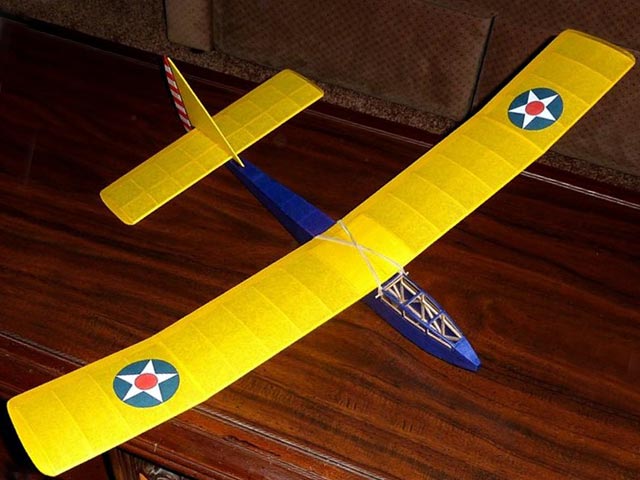 I built (and occasionally lost) several Jetco Troopers back in the 1970s. For a really nice flier, I suggest doubling the plans and adding rudder-only control. I've built several of these and all of them flew really well. Obviously, some minor structural changes, such as using spruce for the wing spars, are necessary, but the "Super Trooper" builds as easily as the original 30" version.
Moeregaard - 12/01/2013
Hi, Steve. Attached is a photo of my first 'Super Trooper' I built as a teenager in 1976 [see more pics 003]. I couldn’t find the requisite sexy babe for the photo, so you’ll have to put up with the skinny 15-year-old. Anyway, the model was built by simply doubling the plans on a photocopier, giving me a 60” span with something like 624 square inches of lifting area (stab included). I double the fuselage longerons to 3/16” square balsa and used 1/8” X 1/4” spruce for the wing spars. Covering was silkspan and clear dope, and weight ready to fly was around 12 oz., making this one a real floater. Guidance was rudder-only, and I think this is adequate for this model. Center of gravity stayed where it was shown on the plans. The airplane flew very well, with a soft, floating glide, but had its career ended when it contacted a kerb on landing. Two more have been built since, one with a Cox TD .020 mounted on top, and they were good fliers as well. Regards,
Moeregaard - 26/05/2015
The original Trooper was my first real towline glider. It provided many happy hours of flying in a school yard. It was also my first experience to see a model catch a thermal. I had to chase it for about a half a mile through neighborhoods to recover it several times! It is very light.
HarrisonKnapp - 25/05/2016
Here's my Jetco Thermic Trooper (oz463) with its very own classic color scheme [main pic, 005] ...a towline glider (high start launch). The polyhedral makes her an ultra-stable flyer. Better have your running shoes on and be ready for the chase.
Neal Green - 05/04/2021
Add a comment