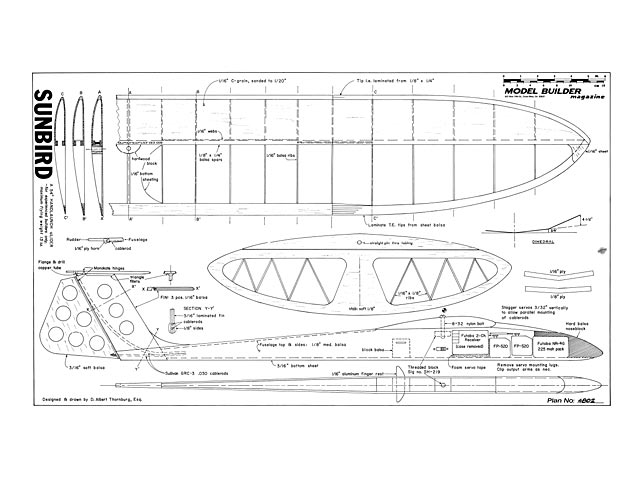 What's this? A 54-inch hand launch R/C glider? Sunbird combines the best of both worlds, F/F and R/C. A baseball pitcher's arm is not required, but a light radio is.

If you've never seen a glider hand-tossed into lift, you may well be a bit skeptical. Doesn't it take a javelin thrower's arm? How often can you actually catch a thermal? Isn't a 54 inch plane too small to see? How important is it to build light? These are some of the first questions people ask.

As far as muscles go, I've got good legs for running, but only mediocre arm and chest muscles. I can throw a Sunbird to 25 or 30 feet of altitude, at most. But this is more than enough height to catch ground thermals anywhere in the US, provided the conditions are right. Ground lift requires only two conditions to be ideal: intense sunlight and low wind velocity. Low humidity helps, but you can live without it. Not that you can't fly handlaunch in the wind, but the bubbles will be smaller and tougher to ride. (Don't worry about penetration; Sunbird has flown unballasted in 22 mph slope winds.) Still. I wouldn't waste much time on cold, overcast, wet, or windy days - unless you just need the exercise. It's called SUNbird, see?

Next question: how often can you expect to 'go out' on a thermal? I'm averaging three thermal flights for every five launches, at the schoolyard where I fly regularly. But I only go flying on warm, calm mornings, between 9 a.m. and noon. And I take time picking my air. I can't overemphasize the importance of conditions: knowing when to throw is a hundred times more important than throwing hard.

The final question is weight: how important is it to build light? If you have to ask this, you'd better think twice about building a Sunbird. The design is STRICTLY for lightweight radios and careful builders. My Futaba equipment weighs under five ounces, and this could be further shaved by eliminating the switch and some of the excess wiring. As it is, the radio is a stock 2-channel with receiver case and switch cover removed. I haven't even clipped the antenna to a pigtail and soldered it to the elevator cable, as I usually do. (This may or may not work with other brands of radio.) Don't even think about building a Sunbird if you don't have subminiature servos and a 225 mah battery pack. If it's a button-cell pack, you'll have to rewire it to fit the fuselage; I don't recommend widening the fuselage for any reason.

CONSTRUCTION TIPS When you're building a ship this size, you need to learn to think in grams. No, not even in grams... in percentages. For example, if your raw stab weighs 12 grams, and you can sand 3 more grams off of it, that's a whopping 25% weight reduction, and well worth it! (If you don't own a gram scale, the post office will sell you one for under three bucks. Just ask for their 'marijuana dealer's scale'). The wing is conventional in structure..."

Update 08/07/2015: Have un-suspended this plan again now, thanks to Yannick who found a non-MB scan of the design. 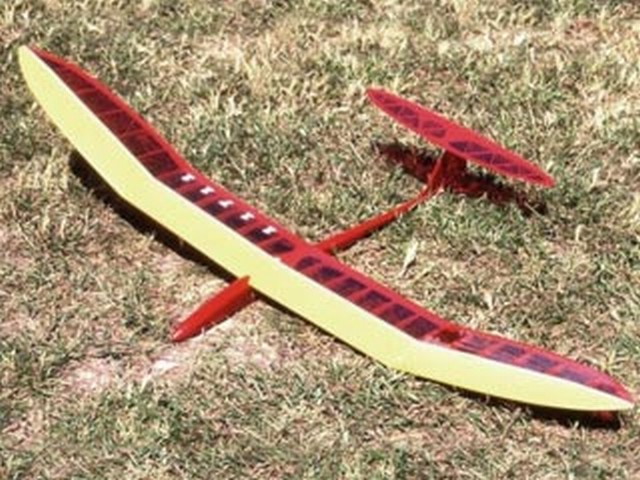 Just found another great quote in the build article, re wing rib profiles: "Note that the last three tip ribs are shorter that the main rib pattern shown. Just snip two or three pair of main ribs down to the proper lengths, then reshape them until they match the leading and trailing edges. Don't worry yourself sick over absolute airfoil precision on these ribs. I don't."
SteveWMD - 16/07/2013
I skimmed the text in the article and didn't see anything about the "world's first RC HLG". I think the following glider is a better candidate for that award: http://static.rcgroups.net/forums/attachments/8/9/a3834926-215-crazydave.jpg BTW, I've seen John Blaser (or is it Blazer?) flying his Sunbird. It was impressive. It was also beautiful, but that may say as much about the builder as about the design.
Lincoln - 16/07/2013
Yes, sorry I was being unclear. It's not in the article at all, its in the AMA biography pages here https://www.modelaircraft.org/files/ThornburgDavid.pdf where (on page 4) he says: "In MB columns, I introduced and popularized Radio Control hand launch glider competition. In April 1980, I published 54 Sunbird, the world's first Radio Control hand launch glider. I organized the first hand launch only contest in Los Angeles in 1980. I wrote basic rules that were ultimately adopted by AMA." To be honest I only found that through Google. The AMA site is so badly designed that I can't link to that text as a web page, I can only use the PDF link.
SteveWMD - 16/07/2013
This is a lovely model. Mine has its span increased to 58" by adding a rib bay on each side, and has highly reinforced 2-piece wing and bolt-on stab. I save weight by using CF control rods in old Sullivan tubes, and modern lightweight radio and servos, allowing a 700 mAH 4xAAA NiMH pack. It flies like a dream on a 2 kg pull HiStart; as I work the CG back, reduce weight and decrease incidence, it should become better for throwing, but at 14 oz it's a delightful thermal finder with excellent handling (though still over-stable).
Stefan Mochnacki - 24/07/2019
In 1976 I built a Mini Bird of Time (from a kit). I changed out the fuselage wood from 1/8" thick to 3/32". Put lighting holes between the wing and stab on the fuse ( like the windfree glider fuse). Used the smallest Airtronic servos and Rx with a 225mah 4 cell pack (no switch). By the time I covered it, balanced it (no nose weight at all!), and had it ready to fly. the weight of my Mini Bird of Time was a hair over 14oz. for a 2 meter plane. At that weight I was able to catch a few thermals that swept across or field. I even threw it one time into a dust devil in the fall. I saw corn leaves going up in to it. Thornburg's design were very good!
Mike McIntyre - 03/10/2019
Add a comment