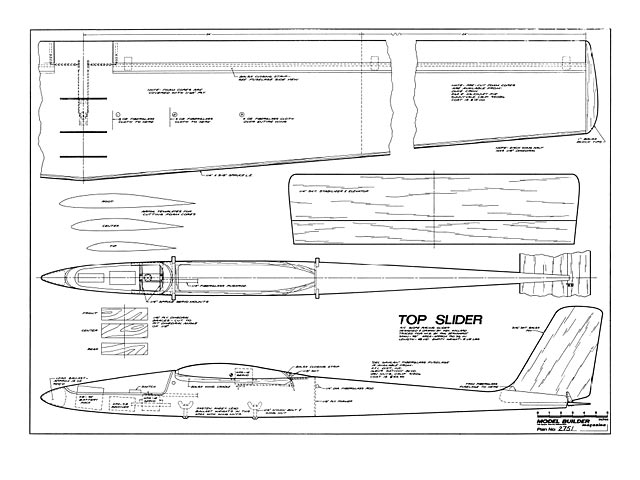 Quote: "Top Slider, by Ken Willard. Primarily for slope racing, the Top Slider also doubles as a fast, maneuverable sport slope soarer that requires only light winds to stay aloft. When the wind comes up, add ballast and hold on tight!

The Top Slider is a special-purpose airplane. Its prime objective is to win slope soaring races. It's a slope soarer, and a fast one - up to 80-90 mph at times - not recommended for beginners. However, if you like slope soaring, you'll like the Top Slider. Actually, if you want to, you can add a rudder to make it more acrobatic, but it will do most of the maneuvers, except a spin, just with the ailerons. But I like to race, and the Top Slider is great for that purpose.

There are certain things that must be kept in mind when designing a slope racer. Naturally, it must be fast, but it also must have the ability to remain airborne in light winds. Normally, if the wind is light, less than six miles an hour or so, racing is not attempted. There are times, though, when the wind is light, and a reasonably good racer will stay up. Then the contest director can say: Let's race! So a race is started. If none of the racers complete the course, the race is cancelled and re-run later. But if any one racer finishes, the race is official. So, a good racer should be able to stay up in light winds - because you'll have them.

Then there is the opposite end of the spectrum, when the wind gets up to twenty-five or thirty. That's when you want to ballast your racer to the maximum for high speed penetration. And it better be rugged, to withstand the landings. You must also keep in mind the FAI limitations for models - eleven pounds maximum weight, and 24 oz/sq ft wing loading (this loading includes the horizontal projected area of the stab).

The Top Slider meets all the requirements. Empty, it weighs about five and one-half pounds, and will stay up in a six to seven mile wind, when the wind is blowing straight in. When the wind gets up to around twenty mph, the Top Slider can be ballasted right up to eleven pounds and still have slightly less than a 24 oz wing loading.

Now there's no particular secret about the design. It evolved over several years of racing, during which I had good racers, but not good enough. They had one thing in common, and that was the Francis Products Del Gavilan fiber-glass fuselage, now put out by A & L Distributors, Inc (Bud Anders and Larry Leonard). It's a well designed, streamlined and rugged body that takes a beating and comes back for more. (If your hobby shop can't supply you, write to A & L, 16509 Saticoy, Van Nuys, CA. 91406. wcn).

The shortcoming of previous designs was the wing. And that's what I decided to fix. I noticed that on all previous designs, when the wind was suitable for racing, I had to carry ballast, and that's wrong. If you need weight, it should be in the structure.

I had seen the ability of foam core wings, when covered with balsa and then fiberglassed, to survive not only hard landings but midair crashes as well. So that's what's needed. But then the 1/64 inch plywood became available, and it's even better.

What about the airfoil? Everybody seems to have their own idea in that regard, so I called upon my aerodynamicist friend Bob Andris, who designed the Peregrine. He recommended the Eppler 374 as a section that would do well in both light and fast winds. So that's what I used.

Because the Del Gavilan fuselage has a relatively short nose, considerable bal-last is needed up front to compensate for a heavy empennage. To help reduce this factor, I decided to sweep the wing aft. I later discovered that this sweep yielded the best aerodynamic configuration, according to Bob, since it sweeps the quarter chord line aft at the optimum 5°.

Finally, and this may be purely psychological on my part, I went to the trouble of making a closed hinge line for the full span ailerons. At a seminar I attended in Seattle a couple of years ago, a modeler gave a talk on the benefits of eliminating the gap along the aileron hinge line, claiming it added about five mph to his slope soarer. Now that's significant, if it's true. Even if is isn't, and only a mile or two per hour is added, it's still worth it.

The Top Slider can be cleaned up even further, but when I built it, the big spring races were only a few weeks away. You will note that the wing is held on by the old reliable rubber bands; I didn't have time to fit an internally mounted bolting system. Tried one, but it didn't hold up on the landings. So, back to the rubber bands. And that's also why there are protecting rails on either side of the aileron servo, in case a rough landing makes the wing shift.

At first glance, you may think the CG is pretty far aft as shown on the plans. Remember, though, that the wing is swept, so the CG can be farther back. It still is at a relatively normal position with respect to the mean aerodynamic chord.

Then you will note that the stab is mounted low, and some of the Del Gavilan fiberglass is cut away, since it is not needed and only adds weight. The stab was lowered for racing to give a cleaner intersection between the stab and the fuselage. Again, a small thing, but every little bit helps when you're out for speed. 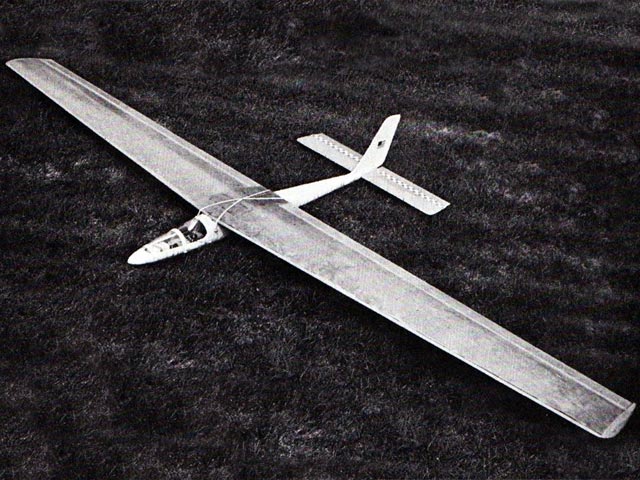