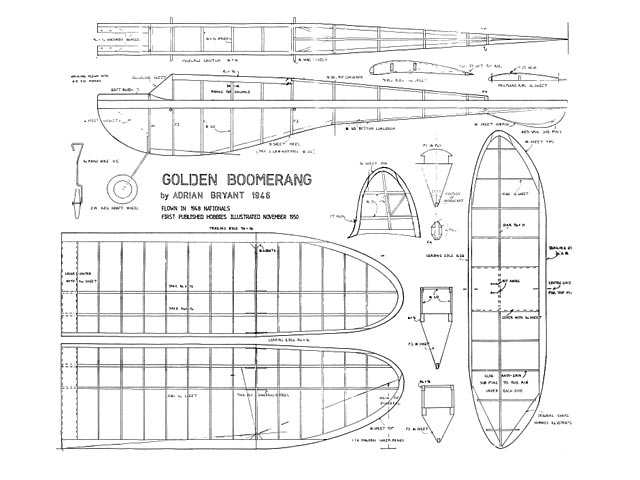 Quote: "Adrian Bryant's Golden Boomerang was flown in the Australian Nationals in 1948, and published in Hobbies Illustrated, November 1950. It was reprinted in Aeromodelling Digest, 1990, which also carries the story of the design (inspired by the Rocketeer, it was first flown by a Frog 175 sparkie, then an ED 2cc). The name comes from the original model's colour and also that a lot of time was spent looking for it in the paddocks - this was before DTs.... The original model was finally lost at a contest, flying OOS and never recovered. Although no match for models such as the Stomper which appeared a few years later, it nevertheless was built by many modellers had good contest success in the day, and latterly in nostalgia events. It was the subject of a one-design fun fly at one of the annual Muswellbrook Veteren's Gatherings."

Alternative print of the plan (not full size) - this is the original 11 x 8 in magazine page as published in 1950. The later plan is a very close reproduction, just giving alternate layout of wingtip balsa components.