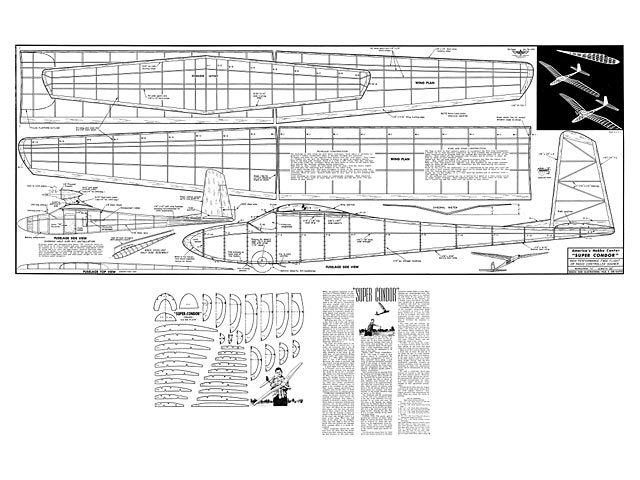 Quote: "High performance free flight or radio controlled soarer" Plan shows optional power pod, for .020 to .049 engine. Quote from article text: - "With the possible exception of Jetco's line of Thermic Gliders no other glider has done more to get modelers started in the fine art of soaring, than Cleveland's Condor kit. When this kit was first released back in the 1940 era it's fantastically low price coupled with a six foot span and graceful appearance made it an outstanding favorite with modelers the world over. Even through the years since, it remained a steady favorite despite small periodic increases to offset rising costs. However, since last year this gem of modeling design has ceased to become available. Reflecting upon this, we thought it a fine idea to do a new and similar design not unlike the original, but with refinements in structure, plan outlines, dihedral and optional radio installation. As we had fully expected, the new design, proved to be every bit as able as the original for thermal soaring, with the addition of the .020 power-pod and radio gear, the art of soaring reached new heights for us, and like many others we're slowly becoming addicted to it." 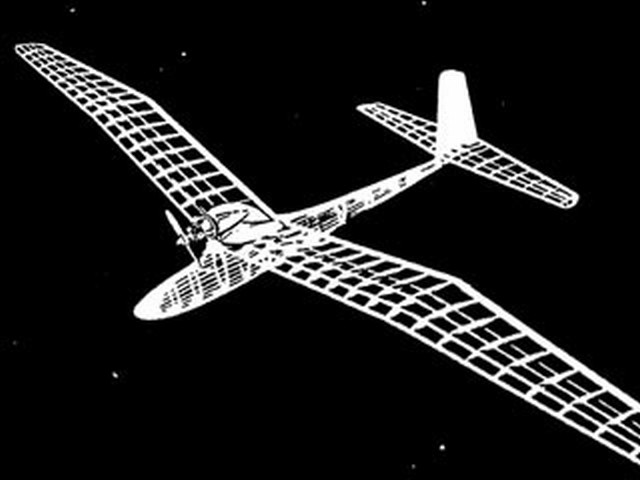 If anyone can confirm the magazine title and date for this plan, that would be great thanks
SteveWMD - 13/07/2013
In the past year I have scratch built many models from plans on your website. See Super Condor photos attached [more pics 006-009].
AndyCoutts - 18/05/2016
Many years ago I built a model very similar to this one, with single channel R/C and a Pee Wee 020 mounted over the wing. It was a total failure, with its beautiful gull wing and no ailerons, it wouldn't turn. It ended up hung from the ceiling in a hobby shop because it sure wouldn't fly. I could build another one and just continue the wing out straight rather than its gull wing and I think it would be fine. Something to consider if you want to build one, gull wings and rudder only just don't work....
DougSmith - 20/05/2016
The Super Condor plan appeared in the Dec-Jan 1965 issue of Flying Models. Sadly, it's the very same issue that noted the recent death of Paul Del Gatto on September 12, 1964 at the age of 39. And he had 4 kids, yet somehow he managed to publish, at the very least, 50 (but probably more like 100) model aircraft designs or articles.
dfritzke - 01/12/2016
Thanks Dave. According to the Jetex Hall of Fame entry for Del Gatto (archivesite.jetex.org), "Flying Models concluded their heart-felt tribute to Paul in these words: 'We will sincerely miss Paul's talents here at Flying Models, and to a still greater degree as a friend. We were proud to know this man. He was highly motivated toward all things aeronautical, creative, artistic, and full of laughter. May we express the sympathies of modelers from all lands to his [family]. This was a fine and clean-minded man, and by casting his teen-age children to this same high standard, he has fulfilled a high purpose here on earth.' "
Mary - 01/12/2016
Here are some pictures of my Super Condor [more pics 012-016]. I downloaded the PDF and redrew it in AutoCad. I had the parts laser cut.
JimKatz - 12/12/2016
Sad to hear of this..Paul re-drew my one and only design: the Shark,,a stylish ( to my15 year old eyes) . It was published in 1957 in Flying Models. Remember getting the check from FM and riding my bike to the hobby shop
for some Ambroid glue for the next model..either a Kenhi Cougar or a twin boom Ukie sport job...except for Bob Palmer's designs. Whom I flew along side, along with Addie Naccarado( SP) ,my first flight instructor , my controline models were home designed. Any old Ukie guys/gals out there who flew at the Sepulveda Basin?
George Poa - 27/08/2019
Add a comment