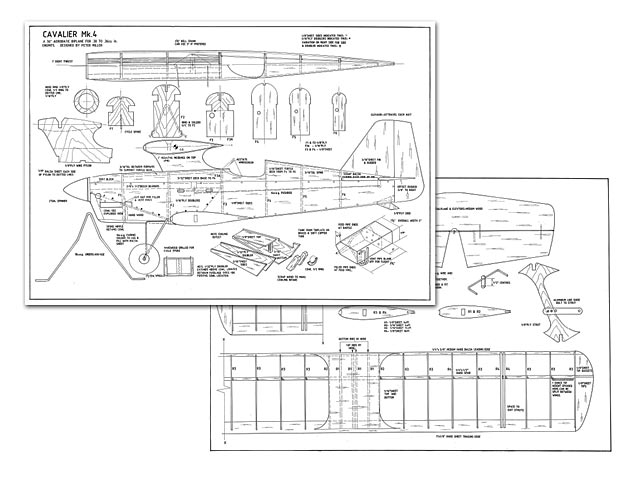 Quote: "Cavalier. This Control Line biplane, designed by Peter Miller, is capable of most tricks in the book including 'The Twiddle'! Read on!

I have always loved aerobatic biplanes. Back in my youth I built a few and saw others, but they never approached the monoplanes with regard to performance and many had downright peculiar characteristics.

In the early '70s I began to think about the designs and I noticed that all biplanes up to that time used thin symmetrical sections while monoplanes used 18% or more. I wondered what would happen if I used a thick wing in a bipe. I also incorporated 1° negative incidence on the top wing because the De Bolt Bipe used this and I thought that it might reduce the twitchiness that many early models suffered from.

My first Cavalier proved that I had hit the correct formula and the model performed just like a good monoplane stunter. I refined the design a bit and a kit manufacturer bought the plans - it never reached production unfortunately.

A whole series of biplanes followed: Duchess (oz3762) in Aeromodeller, Dancing Girl in Model Airplane News, Tiger Rag in Model Aviation, not to mention a few others that didn't get sent in for publication.

Cavalier was built by every member of the club and most built two or three. I experimented with flaps (no good), rudder connected to elevator (terrible), spar below the level of the covering - that really made a difference and looked better as well.

Then I gave up control line and moved over to R/C completely and then, recently, I felt the urge to feel that tug on the lines and the pull as the model went through the manoeuvres. There was only one model to design - a C/L biplane to my favourite formula and so the Cavalier Mk 4 was born.

Before Building. A biplane is not as efficient as a monoplane and so it is essential to keep the wing loading low. In other words, keep the model light.

The wing construction is very quick and simple so do take the time to cut the holes in the centre of the ribs for the spar. You can convert to 1/4 in square top and bottom but it will not fly as nicely and it looks horrible and everyone will know that you are lazy! I expect that everyone who builds Cavalier will have built a few other models first and so I will not need to explain all the techniques such as rolled sheet. If you haven't built another model... you can't fly this one!

Fuselage: This is a completely standard control line stunter fuselage except that it is shorter. The right side is slightly different to the left, allowing the cowl to be removed by simply unscrewing the cycle spoke nipple. This gives access to the tank and engine in seconds.

The pylon mounting is critical because it is designed so that the top wing slots down onto it and located at 1° negative incidence. When marking it out, don't forget to include the incidence line.

The pylon has 1/8 in balsa added between the wing and fuselage, this is cosmetic to make it a more streamlined shape. It is important to make sure that these sides do not affect the wing incidence. Fit the wing as described later and mark the bottom on the pylon. Cut the sides slightly smaller than this line.

When in position the measurement from the top of the engine bearers to the front of the incidence line must be a fraction under 1/8" less than from the line to the top of the bearers at the rear. The 3/16" square supports each side of the pylon are fitted between the formers, the spine behind the cockpit goes into slots..."

Update 05/12/2018: we don't know where this version of the Cavalier Mk4 plan was originally published [got it now, thanks], but a variant also appeared in Flying Models November 1999. I've added that article, as it contains relevant info. Thanks to Bijan in Iran. 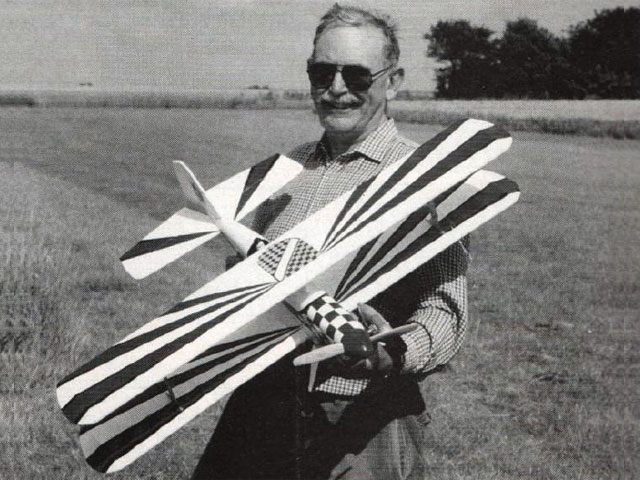