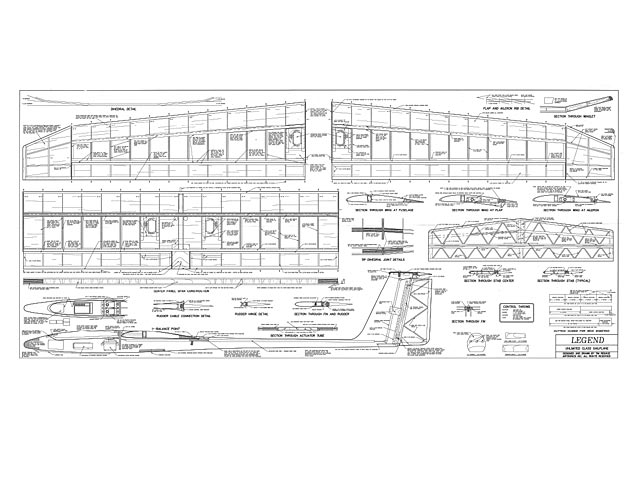 Continuing an excellent tradition, this kit upholds the company's reputation for outstanding parts fit and flight performance in their sailplane kits.

Airtronics kits have been the bench-mark of quality in sailplanes for years and the Legend is no exception. I wanted to build the kit for a long time - advance publicity had people talking about it for over a year - so I finally got the kit and couldn't wait to open the box to look at all the goodies I had heard about.

After a thorough look at the contents I can tell you this is a beautiful kit. The parts are all bagged and neatly placed in the box. The fiberglass fuselage is really a piece of work but it seemed a little heavy (my scale read 11 ounces for the fuselage and canopy.). This just meant that I had to build the rest of the plane as light as possible.

The instruction manual is 43 pages long and is very well done. It is obvious that it was written while someone was building the model. So there is no point in my quoting from the book. Follow closely along with it and I will try to add my two cents worth.

I'll start with the tailpost. The instructions mention just 'gluing' the balsa spacer to the tailpost. I used epoxy and clamped it because this looks like a load bearing part. For the tailpost sides I used Zap.

The next procedure in the instruction man-ual completes the fuselage. I decided to hold off on putting in the leading edge former because I couldn't be sure that it would line up perfectly with the wing. It has been my experience that all fiberglass fuselages are not exactly the same, and not all wings come out to the exact measurement, so I thought it might not be a bad idea to build the wing center section first, place it on the wing saddle of the fuselage, and mark the exact location of the leading edge former and hopefully solve any unforeseen problems.

Let's focus on the wing center section and I'll follow the booklet until any deviation is necessary. One thing you might find handy; the plans are quite large and I decided to cut them into five parts. it makes them much easier to handle, especially if you have a small work bench like mine. Building the main spar is an experience indeed. I have never seen a spar so strong. I would guess you could stand on it without breaking it.

With the center panel finished, I started work on the left tip. I got prepared to set the tip dihedral, and after sanding the 9/32-inch brass tube I blocked up the tip to 2-1/4 inches and tack glued the tube with 5 minute epoxy and let it set. The next night I took the prop out from under the tip and found that the tip dropped 1/4 inch, so if you would like to make sure you get the 2-1/4-inch measurement I would set it at 2-1/2 inches and when it drops it should be right on the money.

Building the stab and elevator require more work than first meets the eye. There is a lot of sanding to be done, but once you have finished, all the extra work seems worthwhile. In my haste I made a mistake and sheeted the stab 12 inches top and bottom, but the strength that the sheeting added might be worth the while. I realize that it adds weight to the tail but I did not want to waste time removing it.

The wing is now complete and the final finishing begins. Two servos are mounted in the center panel, and 1 each in the outer panels. Make sure you mount the servos the way it is explained because it is the best way I have seen to date. They are fully accessible and can be removed in a few minutes.

Covering the wing and tail was very easy using Coverite's 21st Century Film. It goes on very well. I used yellow and metallic blue with black on the bottom for visibility. The model came out without a wrinkle and hasn't sagged or puckered.

The fuselage was painted with Coverite's 21st Century paint using the white primer first and then three coats of Light Yellow. No runs, no hits and no errors. If you like the graphics you see on my Legend, check with Vinylwrite Custom Lettering who made them. Just give Cynthia a call and she'll take care of the rest. They do a great job and they know model builders.

Flying the Legend After a long wet spring I finally got some nice weather to test fly my Legend. I was very anxious to see if some of the things Tim Renaud ofAirtronics told me about this plane were true. He spoke to me at the '92 Toledo show saying if I liked the Falcon 880 I would love the Legend because, and I quote: 'The Legend will launch much straighter and will thermal better and be friendlier to handle'. I'll be darned, he was absolutely right. It launched like it was on rails, it thermalled on the very first test flight and I wasn't even looking for lift. The launches were even higher and I couldn't get over how smoothly it handled; user friendly applies here. One other plus is that it flew perfectly, set up per the plans and instruction book.

On the first hand toss, everything was right on the money. If you are still flying poly floaters don't be concerned about building and flying this kit. You don't even realize that you are flying a high tech aileron and flap sailplane. I don't know what Tim Renaud did to make this model perform the way it does, but fear not you will love it and never go back to what you are flying now.

Flying the Legend after 30 or more flights, I noticed a change in the handling. Checking out a few things I noticed the pull-pull rudder control was loosening and I had to tighten it periodically till it became a bore. I finally decided that the final cure was to put in a push rod and be done with it. After a conversation with Tim Renaud he agreed and said if the pull-pull works right, it is great but if it gives you trouble they are a pain. As far as I can see, this is the only major change to make on this kit.

The Legend gets a full thumbs up from me, and congratulations to Tim Renaud, you have a real winner here." 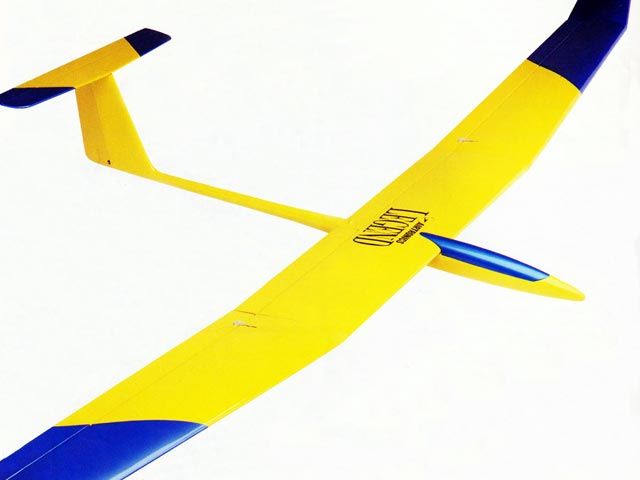