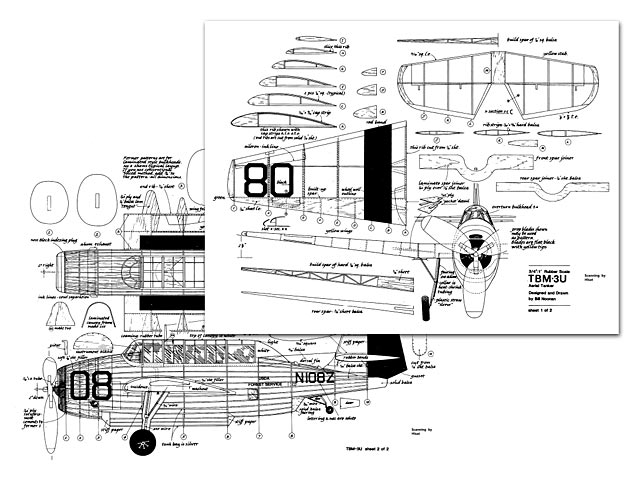 Quote: "This 3/4-inch Jumbo Scale for rubber power has a lot of character; should satisfy anyone's urge for something different. Grumman TBM-3U Aerial Tanker, by Bill Noonan.

A lot of factors come into play when one is contemplating a subject for rubber scale. Is it well proportioned so as to have a reasonable chance to fly well? Does it have character and color? Is it unusual? We think that the TBM aerial tanker conversion pretty well answers these questions.

The design was originated by Grumman in the late 1930 to meet the Navy's demand for a torpedo bomber to replace the aging Douglas TBDs, which were rapidly becoming outmoded. Designated the TBF-1, the new weapon made its first flight in August 1941; the second prototype flew 13 days after Pearl Harbor.

The war imposed accelerated production demands, and General Motors, temporarily out of the passenger car business, was to become Eastern Aircraft and shared in the manufacture of the 'Avenger,' as it was to be known. The Eastern-produced aircraft were designated TBMs, and differed from the Grummans only in small details. A total of 5,173 TBF-TBM aircraft of various models were built.

The Avenger distinguished itself in combat in both the Atlantic and the Pacific. Not sleek, it nevertheless was a robust and reliable airplane. It served in various military capacities until the mid-1950s; some US Marine squadrons operated TBM-3Es (radar version) in Korea. Ironically, the Japanese, who bore the brunt of the Avenger's firepower during WW II, were supplied with TBMs as part of their Maritime Self-Defense Force in 1955. These were TBM-3S-2s, for anti-submarine work. How strange to see such a familiar silhouette bearing the rising sun insignia!

But the venerable TBM had still another, albeit less conspicuous, role. It was 'beat into a plowshare' and, rather than being used to destroy, was pressed into service to save lives and property. In 1956 the US Forestry Service purchased eight TBMs from Navy surplus and modified the torpedo bay to accommodate 600-gallon liquid fire retardant tanks. This was the start of a long and successful war on forest fires. Soon private entrepreneurs formed companies to deal with fighting forest fires with airplanes, and TBMs became the backbone of their fleets. Sixty-six Avengers were still on register in 1969, in the service of fire fighting.

Our model reproduces a TBM-3U, a surplus Navy utility version. The full-size aircraft was given the registration number of N-108-Z, and performed water-drop tests out of Edwards AFB between July and September of 1961, making 23 flights to evaluate flight techniques. Test reports indicate that procedures used in dropping a 600-gallon chemical solution were distinctly different from those for dropping a 1500-pound torpedo. But that's another story in itself. The tests did conclude that the TBM was suited for the task, but that methodology had to be altered to lessen risk. N-108-Z went on to prove itself in actual application. Just what its final fate was, however, is lost in the archives.

Our model at 3/4 in scale, easily qualifies for Jumbo rubber scale events. With minor modifications, it would make an excellent R/C subject, as the corpulent fuselage offers plenty of space for receiver and servos. It is not a beginner's model. But for those who like a challenge, and something out of the ordinary, it provides a very rewarding subject. The color scheme alone - blue fuselage, yellow wings and tail, and red rudder - is enough to win over those looking for an attention-getter.

Fuselage Construction. To achieve the greatest strength-to-weight ratio, it's necessary to build the fuselage in a rather unorthodox way.

Trace nine former patterns, shown on the plans, on 1/16 in (or thicker) cardboard. Cut these carefully, maintaining the symme-try of the forms. Cut the 'skewer' slot in each. We will explain its use later..." 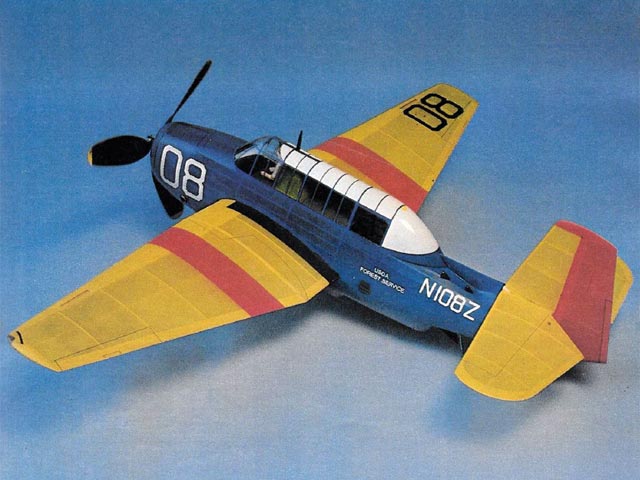