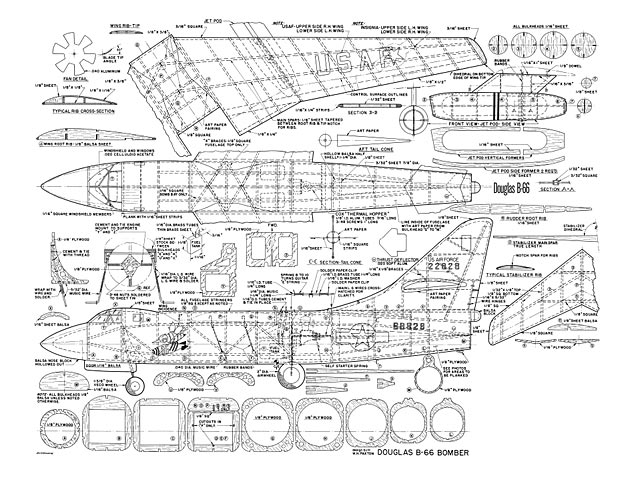 Douglas B-66 Destroyer. Scale ducted fan model of the jet bomber. The subject B-66 was a twin-engined plane, but this model uses a single ducted fan hidden in the fuselage, with dummmy pods under the wings.

Quote: "An adventure in building and flying, for experienced modelers. It flies on.049, proving the age of miracles has not yet passed.

One of the most versatile light bomber-type airplanes ever developed, the new US Air Force B-66 is a twin-jet, swept wing aircraft in the 600-700 mph class. Two RB-66s, the photo-reconnaisance version, flew from Tucson, Arizona to Eglin Field, Florida at an average ground speed of 700 mph. Powered by two Allison J-71 engines and operated by a crew of three, the B-66 is capable of carrying the 'H' bomb at altitudes up to 45,000 feet deep into enemy territory for all-weather, around-the-clock bombing.

Having noticed that my ducted-fan Cougar (oz669) would operate with no loss in performance with air supplied through an opening in the bottom of the fuselage, it was calculated that a model of the B-66 should operate satisfactorily by hiding the engine within the fuselage and supplying air to it through the bomb-bay opening. An adequate air exit for the duct could be obtained by simply leaving off the rear gun turret. By having the engine in the fuselage, dummy engine pods could also be made extremely light and directional stability problems inherent in twin-engine models would be eliminated.

Before we get into consrtuction details, however, I would like to stress the necessity for keeping the weight down and the use of a relatively hot engine capable of turning the fan in the neighborhood of 16 to 20,000 rpm. Target weights to shoot for, which were the actual weights of the components of the airplane pictured are: Total weight 13.17 oz. As can be seen, this is extremely light for an airplane of this size and can be achieved only by careful selection of soft, straight-grained balsa and lightweight basswood plywood.

1. Cut out all bulkheads, ribs, and engine mount supports, carefully identifying each and marking centerlines and attaching structure points.

2. Solder 3-48 nuts to a strip of tin for engine attachment and cement to plywood engine mount with Ambroid cement.

4. Lay out 1/8 sq main side longerons on the plans and mark bulkhead positions. Cement to engine mount support structure assembly.

6. Bend nose-wheel wire so that wheel will be on the centerline of the airplane and tie and cement to plywood support. Cement assembly in place..."

Update 8/07/2013: Replaced this plan with a clearer version, thanks to theshadow. 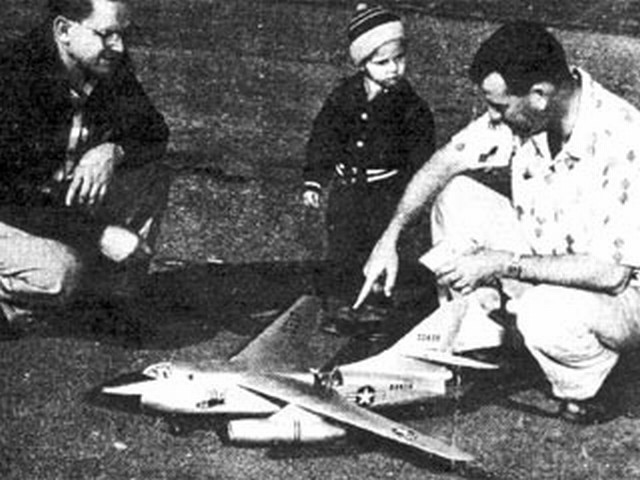