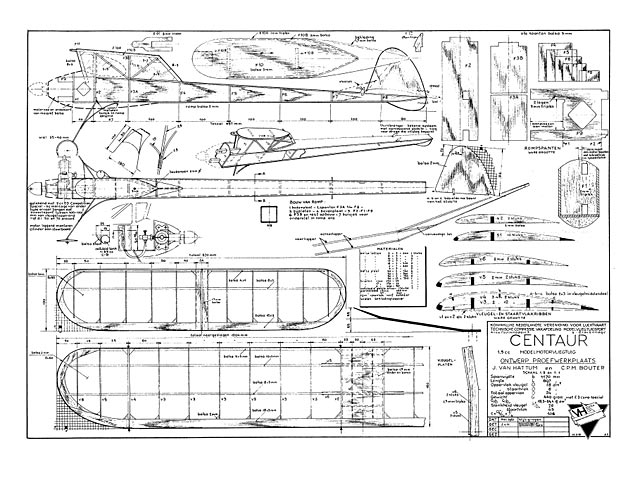 Centaur. Free flight power model. Note this plan is at 50% of fullsize, but shows the ribs and formers at 100%.

Quote: "An attractive semi-scale model with a contest performance - easy to build and trim, and a pleasure to fly. Centaur, by J Van Hattum.

Some years ago the need was felt in Holland for a F/F model that was in the contest class, yet would not have those borderline characteristics that make the extreme contest model so difficult to trim by the less experienced.

Helped by my assistant, CPM Router, I got out the first draft of the model that was intended to do the trick and, after much modification - including lowering the cabin and raking the front forward instead of back with cut-in leading edge as on the Puss Moth and Leopard Moth - a prototype was built.

With an ED Competition Special and a propeller which was intentionally quite unsuitable for this model, the first Centaur put up 4 min odd on its first flight with an engine-run of about 30 sec. Climb was moderate, as was to be expected, but the glide was quite flat and the sinking speed very satisfactory.

Later, the model flew away twice, so we considered that the plans could safely be published. Quite a number were built and its outstanding performance to date was the winning of our 1952 Open Contest by AL Solleveld, of Eindhoven, with a total of 653 sec.

Centaur may be classed as an intermediate contest type. It can be built by anyone who has already built a simple model and trimming will present no difficulties a-a it is docile in the extreme.

Construction. Fuselage : A simple slab-sided box of 3/32 in balsa sheet on to which the cabin is built. If you start with the bottom sheet and follow the instructions on the plan, there will be no snags. Care must be taken when making and assembling the engine-mount as it is undesirable to build in any unknown down- or side-thrust. When using an engine with radial mounting, take the same care and reinforce former F r by making it double thickness as the additional strength provided by an engine mount is lacking.

Wing. There is no need to give any washout to the tips and any washout incorporated would be for trimming.

Tailplane and Fin. These are very simple and follow well-known principles. Tip-up tail serves as de-thermaliser..." 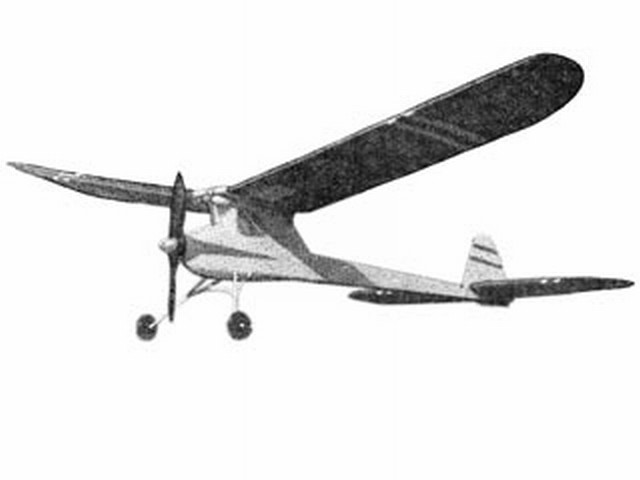