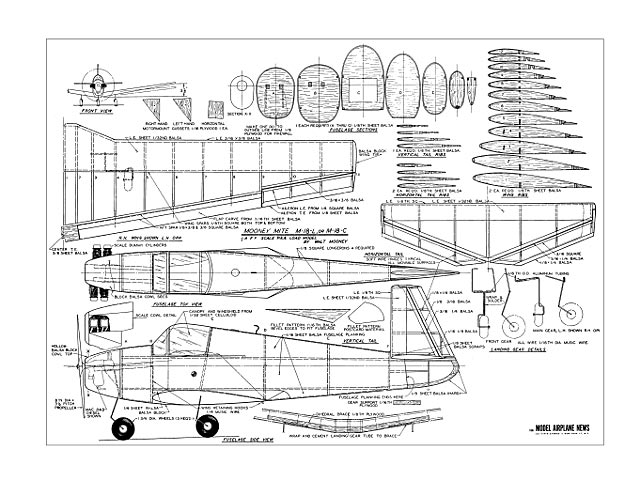 Quote: "Delightful Half-A-powered scale model holds its own and then some against those high wing cabin lobs. Free flight, FAA-Load, a dream.

The Mooney Mite is a low wing single place light-plane powered by either a Lycoming or a Continental 65 hp engine. It has tricycle retractable landing gear and a sliding hatch which, coupled with its trim looks and modern design, make it resemble a little fighter. he airplane flies as well as it looks.

So when the author of this article found out that Dallas Sherman of FAA-Load fame had a Mooney Mite which he was using as a retriever at large con-tests, a PAA-Load free flight flying scale model was inspired, This inspiration, it must be admitted, was helped along by a letter from Mr, Sherman suggesting that The Mite be built.

The original has a very gaudy color scheme which makes the model even more fun on the field. The model looks like quite a challenge in view of the widespread prejudice against low wing models in general but with only two deviations from exact scale, it flew right off the board. The horizontal tail was increased in slightly in size and the dihedral was raised to supply the added stability needed in the model. The model in the article has been flown 20 times, including 14 flights at the 1955 Nationals. It will fly with or without the payload without any trim changes. Weight empty is 16oz, and with the payload 21 oz.

Construction on the model follows full size practice almost exactly, substituting silk for fabric and sheet balsa for plywood. The fuselage is planked where the real ship is planked and the rib-spacing is to scale. All surfaces were made separately and hinged with soft wire for adjustments which, as it turned out, were not needed. The flaps on the model were in the 10° down position to give the effect of an undereambered. wing. Scale wing sections and scale washout (wing twist) were used to prevent tip stall which might otherwise be present in a tapered wing.

If the model looks overly complicated, it should be pointed out that making the surface integral with their forward countewill in no way hurt the model's flying ability an should result in a slight weight saving.

Simply use tapered trailing edge stock on the wing and run the ribs all the way back. Do likewise with the vertical and horizontal tail, Thee the surfaces can be marked on in black paint. For scale contest flying, however, the separate surfaces are worth their produc-tion trouble in scale points at the judging.

The vertical and horizontal tails are pretty conventional and fairly simple, so build them first. The stabilizer (I fixed part of the horizontal tail) shows in the factory three-view to be flat on top in the front view with the bottom surface tapering up. Therefore, plank one side with the leading edge while it is still on the work board. Then the slide against the board becomes the top of the stabilizer, since it will be flat.

The wing should be made next because the cut-out in the fuselage planking will then be easier to fit. Cut all the ribs from medium to soft 1/8 sheet balsa. Then cut the dihedral brace out of 1/8 plywood, taking care to make this accurate. Cut the landing gear support from 1/16 plywood. Lay the bottom spar and the aft spar down on the plans for one wing. Cement the dihedral brace to the bottom spar and then assemble all the ribs from 2 to 12. Install the top spar and the LE from rib 2. to 12. While this is drying, bend the main landing gear from 1/16 dia music wire. Remember to slip the piece of aluminum tubing over the wire before bending it.

When the one wing is dry, block up the tip for the correct dihedral and, keeping the aft part of No.2 rib on the board, install two No.1 ribs and the other No.2 rib. The No.1 ribs are cemented together to make a single rib 1/4 in thick. Add the center section of the top spar and the leading and trailing edges. When the center of the wing is dry, raise the completed part of the wing still higher so that the spar for the opposite wing can be laid on the board and install ribs No.8 through 12. When dry, the wing skeleton can be raised from the board, the LE trimmed and the LE sheeting added. Separate pieces must be used between the No. 2 ribs and between the No, 2 and 4 ribs because of the change of taper at these points.

Now add the second piece of the aft spar, which is triangular in cross-section, Build up the ailerons and came the flaps from 3/16 sheet balsa. Before sheeting the bottom of the wing LE, install the main landing gear. The free end of the wire is run through the hole in the plywood gear supports and then the tubing is wrapped and cemented to the dihedral brace. This gives a sort of torsion bar suspension which the author has used for some time and which has proved practically impossible to break. The bottom sheeting goes on the same way as the top. Make a 1/8 sq notch in it to clear the landing gear leg.

The fuselage should be started next. Cut all the formers out from 1/8 medium soft sheet balsa. Cut the firewall from 1/8 plywood and the engine mount gussets from 1/16 plywood. Start assembly by laying the top 1/8 sq longerons on the plans and mark the positions of all the formers. Cement the longerons together at the aft end, and install the formers in their correct locations..." 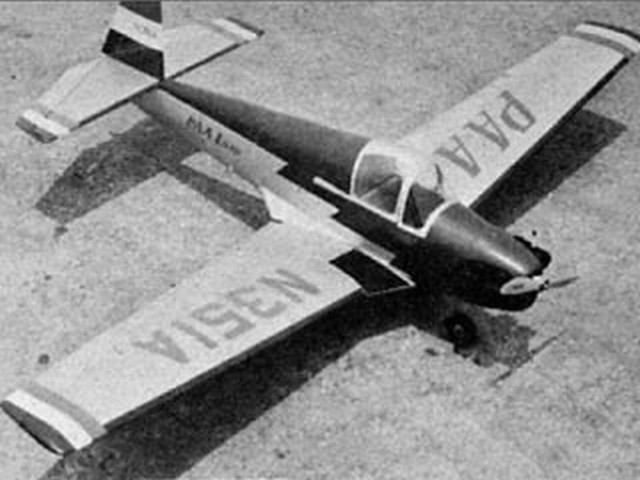