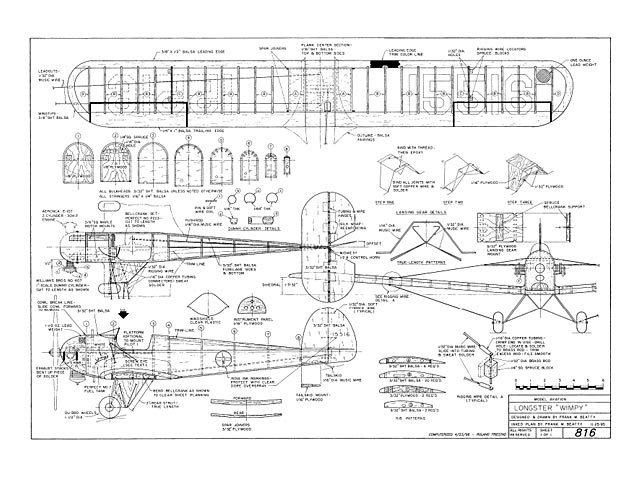 THE LONGSTER WIMPY: Amateur aircraft builders of the late '20s and early '30s faced many difficulties. Among these were the lack of light, cheap, reliable engines, a dearth of technical design engineering data, and restrictive (or outright prohibitive) government policies.

Despite this, Leslie Long and his brother (co-proprietors of a radio factory in Oregon) designed, built, and flew at least nine different home-built aircraft over a ten-year period. The most-successful and best-known of these was the Longster Wimpy.

The Wimpy appeared in 1935. Its original powerplant, a Harlequin, was soon replaced with the newl, developed Aeronca E-107 aircraft engine. The Wimpy could 'race' along at 90 mph, cruise at 75 mph, and land at 30 mph when so powered. its distinctive Cub-like wing with huge fillets spanned 31 feet 6 inches. Another distinguishing feature, the unusual rigid trusslike undercarriage structure, provided an anchor for the wing-rigging brace wires. Sixteen-inch-diameter balloon-type air wheels provided shock-absorbing cushioning for landing loads.

Only a few photos of the Wimpy have surfaced, and few details of its history have been documented. The February 1955 issue of Experimenter Magazine reported that the Wimpy was still flying, though it was much-modified with a 65- horsepower Lycoming engine, new wings, and a revamped turtledeck.

A three-view and photo of the Wimpy came from the Winter 1969 issue of Air Progress-Sport Aircraft; drawings of an early Aeronca aircraft engine came from EAA Aircraft Engines Volume 1. These were the references used for the construction drawings, detailing, and markings of the model. A Free Flight Longster Wimpy (oz3332) model construction article by Walt Mooney from the September 1954 issue of Model Airplane News and an Electric RC construction article by Le Gray in the March 1980 Model Builder were also useful reference sources.

I call the Wimpy an 'advanced beginner' project; by that I mean that the model has a very basic airframe that a novice could gain experience on if some of the details and markings were omitted. (These extras, however, are really not all that difficult.) If the builder chooses to challenge his abilities, he can incorporate all of the details and markings to produce a dynamite-looking model.

The Longster Wimpy has been built to a scale of 1-1/8 inches = 1 foot. The model has a 35-inch wingspan, a 21-1/4-inch length, a wing area of 140 square inches, a weight of 17 ounces, and a wing loading of 12 ounces per 100 square inches of wing area. The model is powered by a K&B .15, selected from my collection of old engines. Currently available engines in the .09 or .10 sizes from OS, Enya, Cox, or Royal would be suitable power plants for the Wimpy. These newer engines with less displacement turn higher rpm and deliver about as much power as my old K&B. They also include mufflers that would provide ballast in the model's nose to help balance it properly.

Be advised - this is a small, clean, light model that can be airborne and can fly faster than you might expect. Moreover, the model has largish elevators and responds quickly to small control-handle inputs. Hotshot fliers can have a ball flying a high-performance, responsive model. The pushrod location in the elevator horn crank determines how fast the elevators move and how sensitive the model will be to fly. Less-skilled fliers should consider installing this in the less-sensitive pushrod location. If desired, it can be relocated after experience and confidence are acquired.

The Wimpy has a tail moment that is 3.7 times longer than the nose moment arm. The model's tail should be kept as light as is reasonably possible, and some ballast will almost surely be required in the model's nose. Approximately 1-1/2 ounces of weight were required in my Wimpy's nose.

I like to install a temporary wrenx eye in the top of the model's fuselage on the centerline at the designated center of gravity (CO) location. During the building process, the model can be suspended from that point regularly to check its balance. The screw eye can be removed and the hole can be easily patched after the model is finished and is balanced to satisfaction. This procedure beats the usual method of suspending the model on my fingers by its wingtips.

This model may appeal to (and be built by) relatively inexperienced fliers, so I must stress that it must not be flown unless it is balanced properly. It should hang in a somewhat nose-down attitude when suspended from the designated CG location.

CONSTRUCTION Since the wing assembly also incorporates the bellcrank-control system and the undercarriage, it will be the trickiest part of the model to build. When this assembly is complete, you will be on the downhill side of the airframe-construction phase. If you can build the wing successfully, the rest of the model will be a piece of cake.

Wing: Make the center section by first cutting out the leading and trailing edges from balsa leading- and trailing-edge stock. Cut out the 3/ 2 plywood forward- and rear-spar joiners and two of the A ribs. Cover the plans with plastic or waxed paper and pin the leading and trailing edges to it. Use 3/32 balsa shims to raise the spars and ribs above the board's work surface. Cement all these parts well. When dry, this subassembly can be lifted off the board and set aside..." 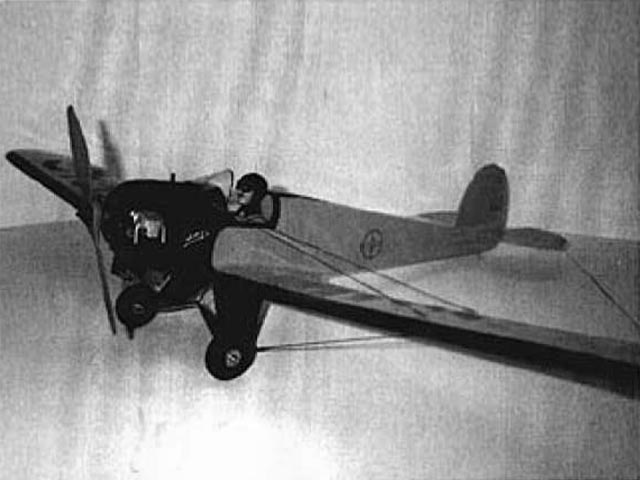