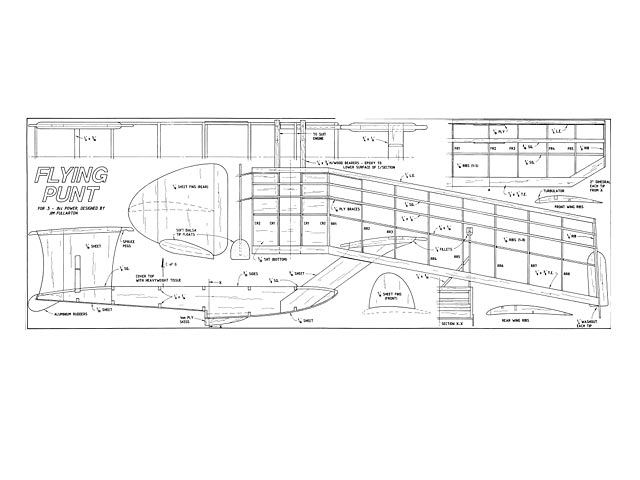 Quote: "This time it’s the November 1999 AEROMODELLER with... the first of two full size plans and the FLYING PUNT by JIM FULLARTON. Another for those liking the unusual, being an amphibious canard for .5cc to.8cc engines. Construction is simple and it flies superbly."

Quote: "Fancy something different? In response to requests for an unorthodox plan, this is it! - Jim Fullarton's amphibious canard, for .5 - .8cc.

I had seen a couple of Jim Fullarton's unusual canard at Old Warden and had been told that they fly ever so well - but had never seen one in the air, so when presented with a reduced copy of a plan by Charlie Jeffery (Water Wings Trophy), I thought I would build one for myself and see how it fared. Result? - Brilliant! Build one yourself, fly it and have some fun!

I fitted an MP Jet .060 Classic in mine, the others I have seen were powered by Mills .75, but any .5 - .8 cc motor will do - in calm weather the MP Jet, turning a Tornado 6 x 4 Nylon prop at burbling speed is enough to pull the punt around at just over head height, very sedately and stable. It presents a very unusual sight in the air and is guaranteed to turn heads wherever it performs. Test glides established the correct balance point - a combination of Plasticine nose weight and decreasing the incidence angle of the foreplane produced a fairly flat glide and gave enough confidence to try powered flight, albeit low-power to start with - in fact, outings with it have produced such good flights with the motor just burbling, that high power tests have not yet been carried out - I'm happy with it flying slow and flat!

Charlie test flew it for me at Old Warden, and reported that no extra trimming was necessary (other than to fit small balsa blocks to the wing lower surface either side of the wing mounts, to fix its position) - and had great fun, flicking and flying it so that I could get the flying shots.

In the build I did move away from the original plan a little, but only to suit my personal practice and to use available materials.

I'm left handed and start a diesel by flicking down and under. I thought that this could be a problem with the minimal clearance between the prop and the top of the punt hull (only tissue covered on Jim's original), so I sheeted the top (1/32) in the area of the prop to give protection from a wayward fingertip. Also, I had an offcut of 3/32 Depron sheet available and decided to use this for the tip fins - just cut out with scissors, gently sand off the edges, rough up the glue area surface and epoxy to the surfaces, after covering - if you need a rudder, make a horizontal cut about 3/4" long and crease the Depron to suit.

The copy of the plan showed no dihedral bracing, so I fitted two 1/16 ply plates at the rear of the leading edge and the main spar, on both the mainplane (zero dihedral) and the foreplane (2"' dihedral under each tip). All fitted after the surfaces had been built and the glue fully dried.

The build is straightforward and needs no detailed explanation. Cut the wing rib spar slots carefully (I pin all the ribs together, use a fine saw to cut the verticals to depth, unpin the ribs and use a scalpel blade to cut out the slots), so the spars are a nice firm fit - this allows the main wing trailing edge to be lifted at the tips for washout, holding its tbrm until you can run thin cyano into all the joints.There is slight undercamber, but the LE and TE are pinned flat on the board. Providing that the foreplane support arms are cut identically to size, true alignment of the foreplane is guaranteed, but changes of incidence can be made by packing up the LE or TE as clesired.The end rib on each half of the foreplane is trimmed to the right length and the TE lined up with the top of the rib, the excess being trimmed back to the main spar ( building a little washout).

I added a further piece of 1/8" soft sheet to the outside of the foreplane tip ribs, after the spars had been fitted, shaped to the rib profile and sanded vertically to give a firm support for the Depron tip fin.

Two evenings work should have you ready to cover - it's that simple. I used Litespan for covering, sealed with a coat of 50/50 dope.The engine bearers are shown epoxied to the lower sheeting at LE and TE - I cyano'd 1/8 balsa sheet to the bearers and then sanded most of it off again to match the lower surface undercamber, increasing the glue area.

The CG position is best achieved by positioning the motor to suit, so leave the bearers a little long (you can trim them off afterwards) and slide the motor forwards or backwards to get it right - final adjustment can be made using Plasticine, when trimming - which is where we started! Happy punting! " 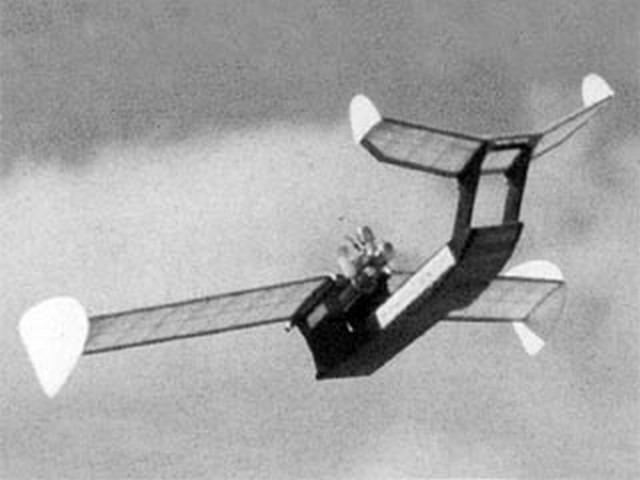 See also thread http://www.rcgroups.com/forums/showthread.php?t=1027052 for an electric version and a discussion on controlling canards.
RogerC - 22/10/2013
Add a comment