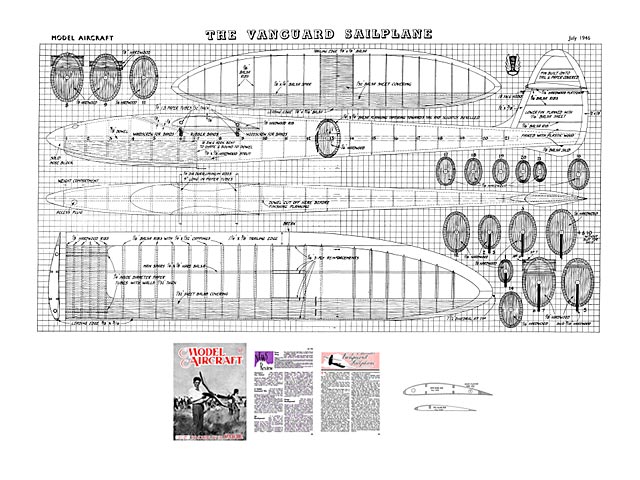 Quote: "Of the 'heavy-weight' type, this machine has proved itself a reliable and consistent performer under all conditions of weather, and it has built up an envied reputation under contest conditions. Apart from its performance abilities, the machine possesses sleek and attractive lines and all the features which recent experiments have shown to be desirable and advantageous in model sailplanes. This model is also exceptionally robust in construction.

THE 'Vanguard' has been developed from four sailplanes, all of which were over three square feet in wing area. It has the heaviest wing loading of any of them, and yet has the best performance. This is probably due to my efforts to keep the machine as streamlined as possible.

Anybody who builds and trims this machine with the necessary precision can be sure of flights of at least two minutes duration, when launched with a 300 ft line, without the aid of thermals.

As the fuselage will take the longest time to make, and will form a basis for the work on subsequent components, start on this.

The formers numbered 1 to 10 are cut from 1/8 in sheet basswood, and those numbered 11 to 23 are produced from sheet basswood. These formers should be mounted on a length of dowel 3/8 in in diameter and of sufficient length to protrude well beyond the ends of the finished fuselage. The assembly of formers, dowel and skid is then mounted between centres on your workbench so that it can be rotated easily to facilitate planking with 1/4 in sq soft balsa.

Each length of planking should be bevelled and tapered as shown and cemented to the formers and to the neighbouring plank, starting with the centre plank at the bottom of the fuselage. When you have got a few planks in position round the bottom to hold the formers firmly in position, build up the well for the wing hatch on the top side with 1/8 in sheet basswood, making sure that the base of the well is parallel with the dowel used for building.

Continue planking the fuselage until at least half of the planking is in position. This will ensure that the fuselage shape is retained while the building dowel is cut in two, aft of the wing mounting, and the rear half pulled out from engagement with the formers..."

Article pages, text and pics as detailed above. 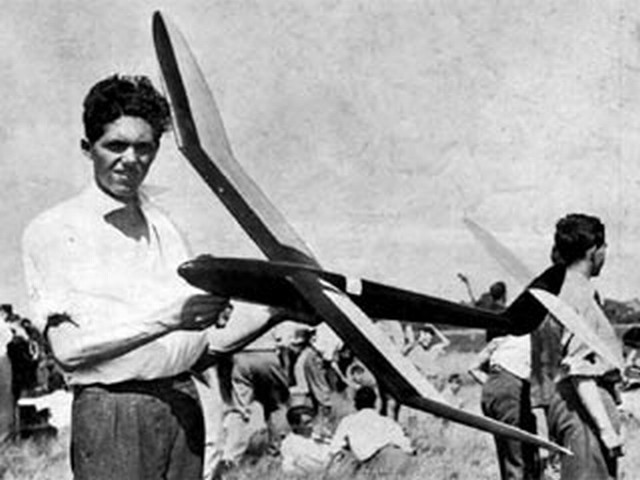 I down loaded the plans for the Vanguard. Does a second sheet exist showing the different rib sizes for the wing, elevator and fin? I saw the supplementary file - it only shows the main ribs for the wing and elevator. Both surfaces plus the fin are constructed of different size ribs, which are not shown. I have no way of determining the size or shape of these additional ribs. The wing ribs size and shape are especially important so the sailplane will fly level and straight. Other than that I see nothing else missing on the drawing regarding structure. Mechanical has to be left up to the builder.
MikeDiesu - 28/02/2016
Add a comment