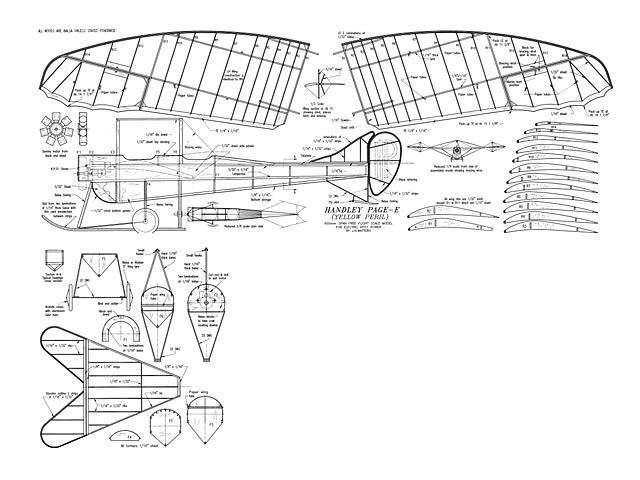 This model was one of those, which after seeing a picture of the full size aircraft you say: One day I will build a model of that. Well, some time ago I did. Trying to obtain information on the 'E' was sketchy, (more information has now come to light). Finally, I decided that the best I was going to get, at the time, was from the colour drawing in the book - Pioneer Aircraft. In the Blandford series of books on aircraft. For the discerning scale modeller, some of the detail of my design may not be quite accurate. I have followed the drawing as far as I could and used some modelling licence. The final outcome I think is quite satisfactory.

The design of the full size Handley Page E follows from the original A called the 'Bluebird'. This aircraft never actually flew, but after the installation of a more powerful engine, did finally manage a 'hop'. Handley Page improved his designs and retained the crested wing outline, The E was the first two cockpit design but was later modified to become a single cockpit but still retained the two tandem seats. The E was a successful aircraft, managing on one early flight to cover a distance of over 30 miles. It went on during its life to cover many thousands of miles. The name 'Yellow Peril' or 'Antiseptic' comes from the cellulose protective coating which was applied to the wings and tail. This coating on drying turned to a yellow-green. Hence the nickname.

Fuselage. The fuselage at first may appear to be complex, but is relatively straightforward. I used PVA glue for the majority of the construction, with the odd drop of cyano when required. Start the fuselage construction by building two identical side frames. The longerons should be from medium hard balsa, with softer vertical bars. All the formers are 1/16 in sheet and are probably best numbered for identification.

Because of the triangular fuselage section it is not as simple to construct as a standard rectangular form. You could always separate the triangular bottom part of the former, and glue on later. I decided to keep the formers in one piece and built as follows. Pin down former Fl to your building board. Now glue vertically to this both side frames. Making sure that they are vertical and not twisted. This should be left to set. With this assembly still in position, the remaining formers can be added. At each stage check that all is still true..." 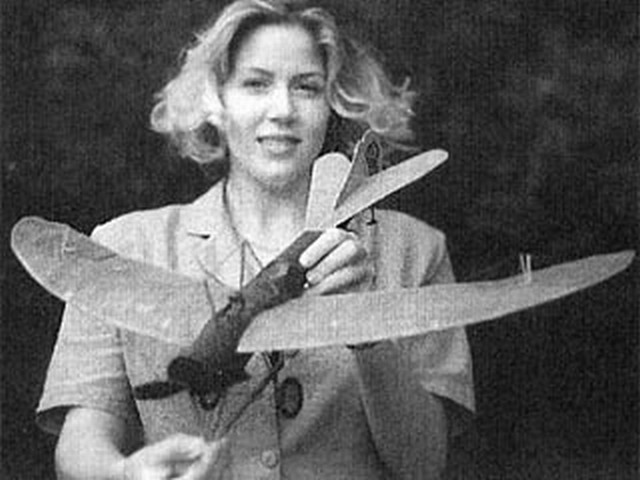