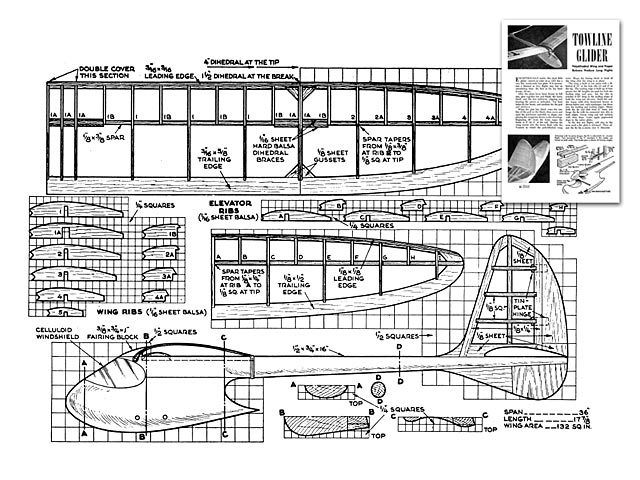 Quote: "EXCEPTIONALLY stable, this sleek little glider (shown in color on p.120) has a very flat, moderately fast glide. If it encounters a thermal or two, flights may last an astonishing time. Its best so far has been 4 min 20 sec.

After the plans have been drawn to full size, glue together the pod blank, the boom block, and the two sidefaces, aligning and locating the pieces as indicated. Use hard balsa for the boom, and medium for the pod and sidefaces.

When the glue has dried, trace the outline of the pod on the blank; then carve and sand the pod-boom assembly to shape, employing the templates shown in the drawings. Beginning 4-3/4 in from the front, taper the boom to 1/8 by 1/4 in at the tail. Mortise the wing mount into the boom flush with the V-notch in which the polydihedral wing rests. Shape the fairing block in front of the wing after the wing is in place.

The wing is built as one piece with a dihedral of 1-1/2 in at the twin ribs 1A and 4 in at the tip. The trailing edge is built up of four pieces, but 36 in lengths are used for both the leading edge and spar. Set the ribs in notches 3/32 deep in the trailing edges of both the wing and elevator. Build the rudder frame with twin horizontal braces as shown below and, with sandpaper, fair these into the leading and trailing edges. Shape both the fin and skid from 1/8 in balsa and hinge the fin with tin cemented into slits in both edges. Cover wing and tail surfaces with clear dope. Later apply pigmented dope to the entire glider.

In the first test flights, add clay to the nose until a flat glide is obtained, then adjust the fin for a circle." 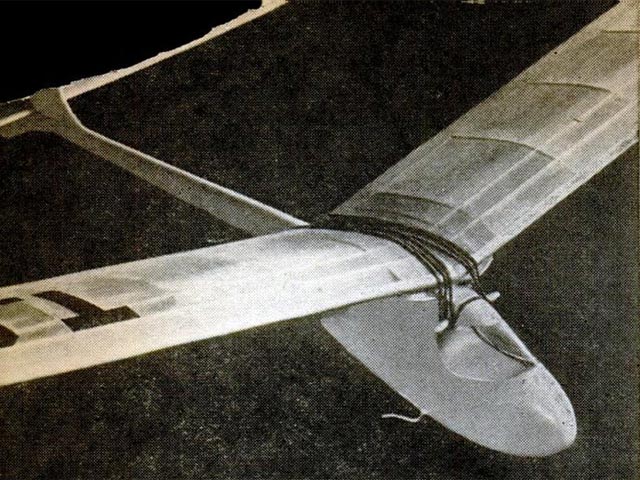