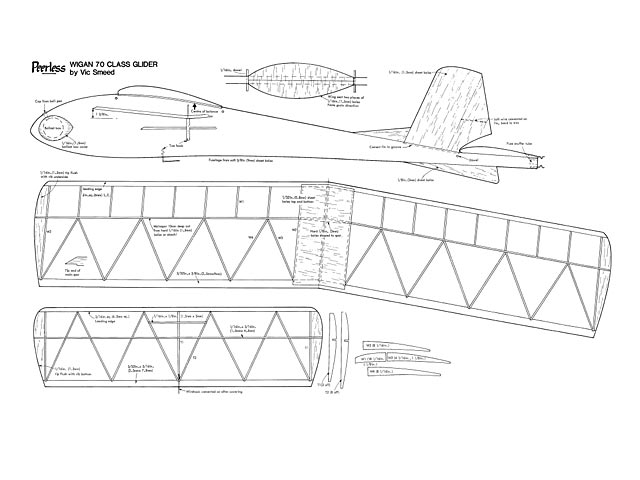 Quote: "THIS LITTLE model, designed to the Wigan 70 class, is straightforward to build and fly and offers an economic introduction to the sort of semi-geodetic construction which creates surprisingly rigid and warp-free flying surfaces. It also gives an opportunity of using up lots of the odd bits in the scrap-box, especially 1/16 in sheet oddments!

With a rule limiting only span and length, it seems worth going for area, as the greater the chord of an aerofoil, the more efficient it should be. However, the greater the chord for a fixed span, ie the lower the aspect ratio, the higher tip losses and induced drag become as a proportion of overall drag, so there is obviously a point at which increased aerofoil efficiency is cancelled out. Experience with small gliders suggests that an aspect ratio of 5-1/2 to 6 is as low as can be used with advantage, giving in this instance the quite respectable chord of about 5 in.

A large (comparatively!) wing area allows a useful size tailplane, but even with a respectably long moment it is not necessary to use all the maximum length permitted, unless the minimum weight allowed (2.47 oz) is intended, This design aims for slightly more than the minimum, and uses a deep, narrow fuselage, the first purpose of which is to give reasonable side area for better visibility at a distance. The rule stipulates that the fuselage must be of all-sheet construction, so ours is simply cut from a length of soft 1/8 in sheet; it should be soft, white balsa of the type that easily takes a thumbnail impression. This is easier to work and can be quite as light as a built-up sheeted structure.

Another reason for a lot of side area is that it helps during towing. If a glider can be towed up easily and straight, but will circle as required on the glide without an auto-rudder, why fiddle about with bits of cotton and rubber bands? Side area, a little sweep-back on the wing and a slightly offset tow-hook will allow a model to be towed straight even with a permanently set turn trim. What isn't included can't go wrong.

In the same way, bent wires or thread stops for a dethermaliser tailplane are complications which can be avoided by using the fin as a stop. It is not difficult to pare away a little, or patch a scrap back, to get the right angle on the tail. If a rubber band is taken from the front dowel, over the tailplane, under its wire hook and back forward to the other end of the dowel, the tailplane will pop satisfactorily and all that is then needed is a small band between the wire hooks at the back to hold it down. This makes fitting a DT fuse and a snuffer tube very simple..."

Quote: " Aeromodeller free flight plans. Hi, Free flight plans from... SEPTEMBER 1982... One free flight plan and it is yet another VIC SMEED design. PEERLESS a simple to construct performance glider. It is inexpensive to build and the semi-geodetic construction of the wings and tail creates surprisingly rigid and warp free fling surfaces. Being a Vic Smeed design it will fly well." 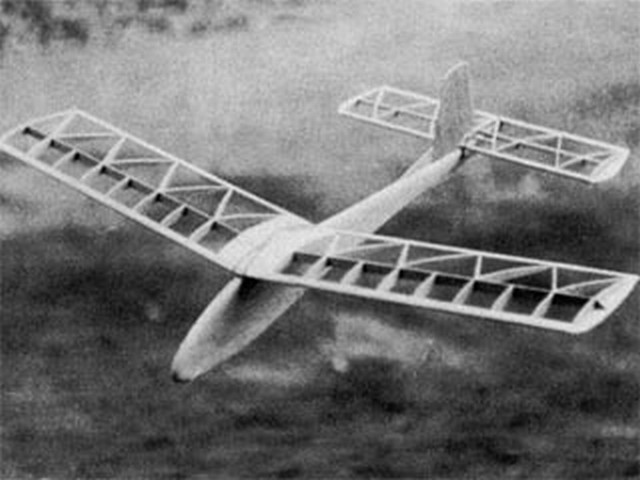