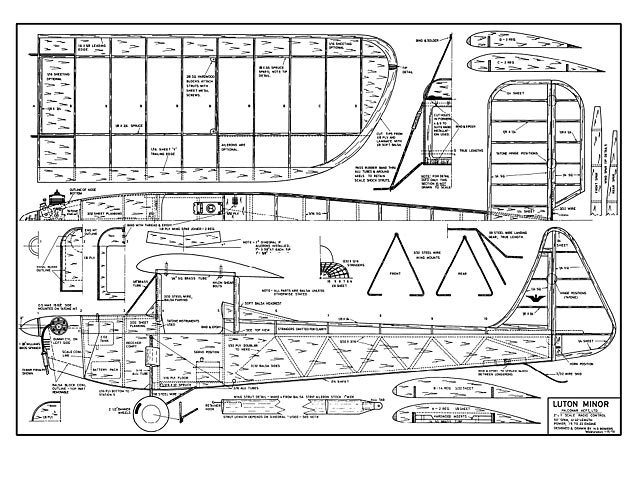 MY AFFECTION FOR the Luton Minor goes back to a beautiful winter in Northern India about seventeen years ago. When I received my December 1953 copy of Aeromodeller and spread out the full-size Luton Minor (oz397) plan which was included, there before me lay, without a doubt, one of the most pleasing little airplanes I've ever seen. I built the model and powered it with a trusty old Mills .75 cc diesel engine and flew it free flight for well over a year with not a scratch (my bearer turned out to be an excellent model retriever).

Now comes the remarkable part of the story. I gave the model to an English friend, DA Blackford, who was the local representative for an American tractor firm. We installed his ED Bee 1 cc engine and took the model out to the polo field for a test flight. Needless to say, with the added power we got much more altitude than expected and the Luton hooked a gigantic thermal. The last we saw of it, it was a mere speck heading east across the Jumna River. Blackie and I wrote it off and headed for the Gymkana Club for a 'chota peg.'

About a month later Dottie Blackford called me at my office and asked if I would recognize my model from a picture. I assured her that I would, so she said to look on the cover of the current issue of Eve's Weekly, a Bombay news magazine. I got the magazine and there it was: my Luton Minor being held by a Member of Parliament, with a young member of the National Cadet Corps pointing out some of the finer constrution details of 'his aircraft'!

A little intelligence work by Blackie uncovered the story. The thermal had dropped our model near a village about ten miles east of Delhi (site from which flight originated), where a local cow-herder picked it up and rushed it by bullock cart to Palam Airdrome. Here the Indian Air Force had a Spitfire Squadron, along with a Cadet Corps Model Club. One of the cadets paid the cowherd 2 rupees (about 40ct) for it, and he returned to his grazing herd, having done his bit for God and Country. When Blackie saw how it had been 'buggered up,' he decided to let the cadet keep it, but his wife, Dottie, had a more practical suggestion. She said 'the little blighter needs a good hiding.'And so it goes - the first liar never has a chance.

I never lost my 'hots' for the Luton, however, and vowed some day to build a radio control model of it. Here you have the results. As a two inch to the foot scale radio control model, it is every bit the flyer its predecessor was those many years ago. This time I used the OS Max engine and reliable Controlaire radio gear, so this ship won't be lost. Thanks to the Falconar Aircraft, Ltd., people up in Edmonton, Canada, who sell the full-size drawings for home construction of this bird, I obtained a brochure with a set of three-views, a beautiful cutaway drawing, and two excellent pictures. This was all I needed to develop the model to the scale that I wanted, so if you are looking for a sweet-flying, docile scale trainer, this will fit the bill perfectly.

The construction is simple and straightforward, so no lengthy explanation of how to glue piece X to former Y is necessary. A few hints should prove helpful. With seven degree dihedral, ailerons are absolutely not needed, but they can be added, if desired. The outlines are provided on the plan and there is ample room for an S-4 Servo in the wing root bay. If ailerons are used, be sure to reduce the dihedral to one degree. I did not cover the center section, leading edge, or tip with sheet balsa, but you may do so if you wish, as pointed out on the plans.

The real key to success with the Luton is a sturdy, true wing mount. Make accurate bends with 3/32 piano wire and insert the tips into 1/4 s. brass tubing at the top. Securely bind and epoxy the bases of the struts to the plywood plates on the fuselage. Now bind the 1/8 brass tube which makes up the front leg of the forward strut to former 3 as shown and epoxy well. When dry, bind with fuse wire to the 1/4 sq brass tubing and solder well. This fits snugly into the 1/4 groove formed on the bottom of the butt ribs of the wing, which is attached by nylon shear bolts. I made the wing struts from 1 in streamline strip aileron stock picked up at the local hobby bazaar.

Although I have used two degree downthrust, three, or even four, degrees might be an improvement. Cover the turtle deck with silk, along with the rest of the model, and furnish in your favor-ite color scheme. My first model was white trimmed with blue, and the current RC job is light gray with blue trim and dark blue registration numbers cut from MonoKote. Insure true alignment. A scale seat over the servos to keep out the oil and 'goop' is suggested. Keep the control movement to only about five degrees each way, since the surfaces are quite large and effective. Balance the model at about 30% MAC and it is ready to go.

Be prepared for one of the most de-lightful models that you have ever flown. It's stable, forgiving, and beautiful in flight. The takeoffs and landings are smooth, and the plane has a remark-able adaptability to rough fields, school yards, parking lots, and the like, from which we members of NVRC are having to fly these days." 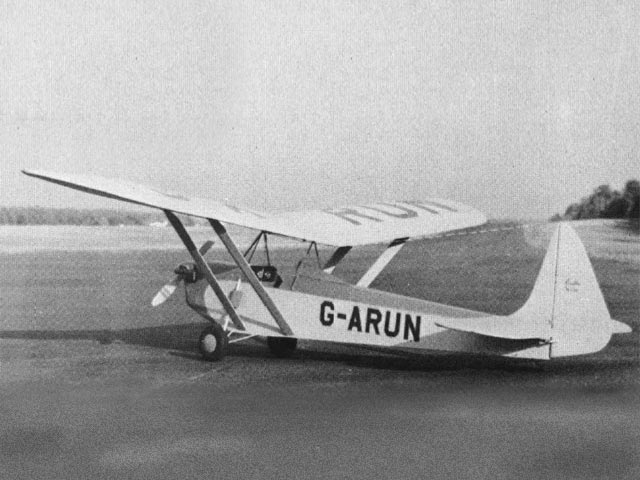