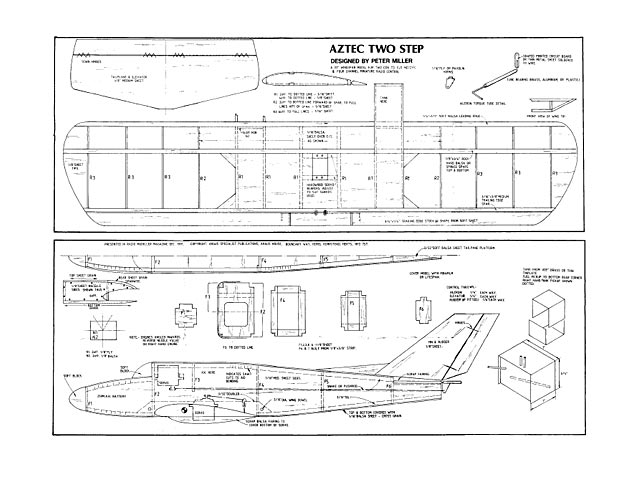 Twin engined models have a reputation for being tricky to fly when one engine dies. Pages have been written On the subject of how to cope with the 'engine out' situation and many is the tale of woe regarding the demise of twin engined models.

My own experience with twins had been limited to a converted Super 60 (oz552) and even this stable model proved to be such a handful with one engine out that it was soon converted back to a single engine.

At the Small Model Day at Old Warden I watched Dave Wilshere's tiny little twin performing aerobatics on one engine, loops, rolls, the lot. I was amazed and the next day I had two Cox TD .020s on order. The nice thing about small models is that they normally bounce in a crash and if they don't, all you have lost is a couple of weeks' work and a small amount of wood.

Design philosophy: The design of the model is very loosely based on an Executive aircraft; it could be converted into a military type quite easily but I felt that military colours would not be a good idea if the model crashed in grass a long way away.

The flat bottomed wing was chosen to ensure adequate lift with one engine running and a reasonable glide - it is also much easier to build. The structure is over-strong. Originally I used spruce spars but very hard balsa would be quite strong enough. The fuselage is very tough because the 1/4 and 3/16 square in the corners not only allows for a nice rounded appearance, they also add strength.

The eagle-eyed will notice that the drawing is slightly different from the photos. The nose has been slightly lengthened and the windscreen moved forward. This has three advantages. The longer nose gives a little more protection for the engines, it also means that the 1-1/2 ounces of lead that I had to put in the nose can be omitted and moving the windscreen forward makes radio installation much easier.

I used Fleet Micro radio with three servos but as you will see, two would have been enough. It would be possible to fit two larger servos by laying them on their sides. More about this later.

In flight: I will talk about flying the model at this stage because that is what most people will want to know about before starting building.

The day chosen for test flying was warm with a breeze that varied from flat calm to about lomph and swung through about 45 degrees. The engines were started using my home made 'Buggy motor' starter and run in, that means nunning a tankful through each engine at a rich setting. Both engines were then started and tuned and the model was launched.

Away it went in a steady climb with no fuss or bother. A couple of loops and rolls, very nice. model was not too fast and the sound of the engines was delightful, far nicer than a single engine.

Very soon the engine note changed. One had stopped but I couldn't tell which one because the model continued in a straight line. I tried a turn, no trouble, a turn the other way. still no bother, which had stopped? I tried a roll to the right. a bit sluggish. A roll to the left was the same. Now I tried to gain some height and the model slowed down and flicked into a spin. Stop the spin with ailerons and pull out and off we go again.

I had plenty of practice at single engined flying on the first two flights, and found that as long as the speed was kept up the model performed like a single engined model. I did not need to use rudder to correct the spin when it came in, just ailerons and elevator. Putting in coupled ailerons and rudder did not make life any harder or easier.

Once I had found the lump of congealed castor in the fuel line, both engines ran sewwtly, and I has several terrific flights..."

Quote: "Hi Steve, Attached is a copy of the article and plan for Peter Miller's Aztec Two Step. This is a Twin engine Cox 020 Tee Dee powered RC model. The plan states it has a 33" wingspan but measuring from the scan I get almost exactly 30" and other dimensions on the plan such as the 3/4" aileron seem to measure correctly so hopefully this is a misprint on Radio Modeller's behalf and not a scanning error. The plan was published in the December 1991 issue of Radio Modeller and, it seems, quickly fell off the radar but would probably make an interesting small electric flyer these days." 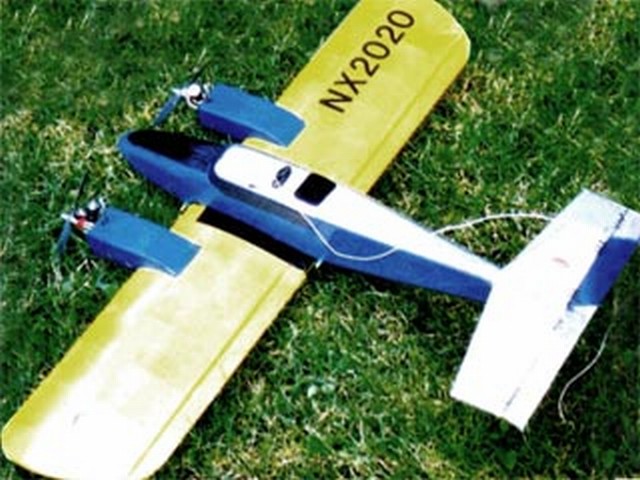