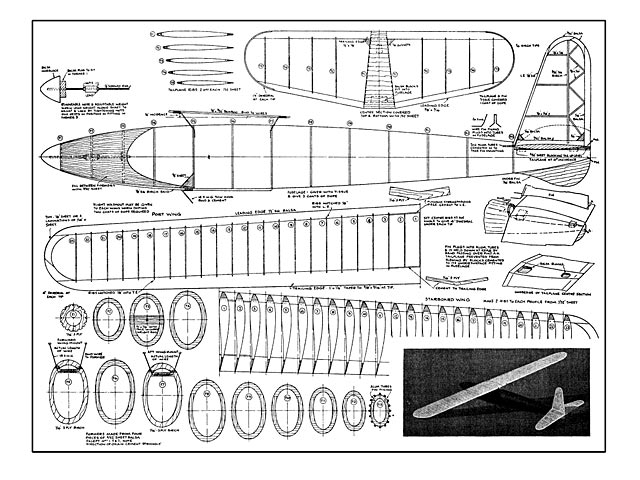 Quote: ""I think that this is the last Ron Warring glider from this book... The Leander - 49in sparless design. Developed, as Ron says: from my 1938 glider design with which I obtained second place in the 1939 Pilger Cup ...printed in 1942, the book has quite a lot of building guidance for each plane.."

Quote: "This glider is an extremely stable machine and has a really excellent performance. Spar-less wing construction is used and this represents about the upper limit for safety for such construction.

Fuselage: The formers are elliptical changing to circular at the nose. Sixteen stringers of 3/32 square balsa are equally disposed around the circumference and the nose is filled in with 3/32 sheet balsa. Commence construction with the formers.

Formers 1, 5 and 7 are cut from 1/16 birch 3-ply to give additional strength at these parts. All the others are built up from four pieces of 3/32 balsa, cemented together so that the grain is approximately parallel to the circumference. Balsa 'frames' are first made of approximate size, the former outline traced on to these and cut out. Each former is then mounted on card, which has a slot cut out of the middle to take a strong birch rod of approximately 1/4 in square. The formers are threaded on to this rod and placed in their correct position relative to the datum line and each other - see sketch.

The stringers are then cemented on, working in opposite pairs and, when set, the birch rod may be withdrawn and the cords removed. This method gives an absolutely true fuselage with the minimum amount of work.

If desired, the formers may be wound from 1/32 balsa instead of cut from 3/32 sheet. A strip of 1/8 x 1/32 balsa is taken and wound around a thick cardboard former of the correct shape but 1/8 in smaller all round. Four lappings of balsa are applied, cementing each, so that the finished former is of the correct size, see diagram 41. It should then be removed from the cardboard, sandpapered smooth and replaced as the card can now be used to mount the former on the rod.

This method is somewhat easier than the other and the result is stronger. The stringers are cemented on as before and then the rod and card formers removed. The wing mounts are of 18 swg wire bent to the shape shown on the plan. The front one is bound and cemented to former 5 and the rear to former 7, making sure that the latter is 1/4 in lower.

The skid of 1/8 square birch is cemented to the underside of the fuselage and the 18 swg wire tow hook bound to this. A 1/8 sheet gusset is cemented over this and to former 5.

A piece of 1/2 x 1/16 balsa with a hole drilled in the centre is cemented across the middle of former 3 to carry the weight rod.

The whole of the nose may then be filled in with 3/32 sheet balsa between each stringer from former 1 back to the line shown on the plan. Sandpaper down smooth when dry. The rear end of the fuselage is built up to carry the tailplane at 0° incidence. 3/32 sheet is used to conform to the undersurface of the tailplane so that the latter will rest just below the top of former 13. Small 20 swg aluminium tubes are cemented into former 13 as shown on file plan to take the 20 swg wire fin fixing.

Finally, to complete the fuselage, the underfin of 1/16 balsa is cut out, sanded smooth and cemented in place. Rub down the whole fuselage lightly with fine sandpaper and cover with tissue. Three coats of dope or banana oil are applied after the tissue has been tautened. The fuselage should be covered by six or eight strips of tissue, about three inches wide, to avoid wrinkling. Aim to cover about three stringers with one strip and do not try to cover too much at once..." 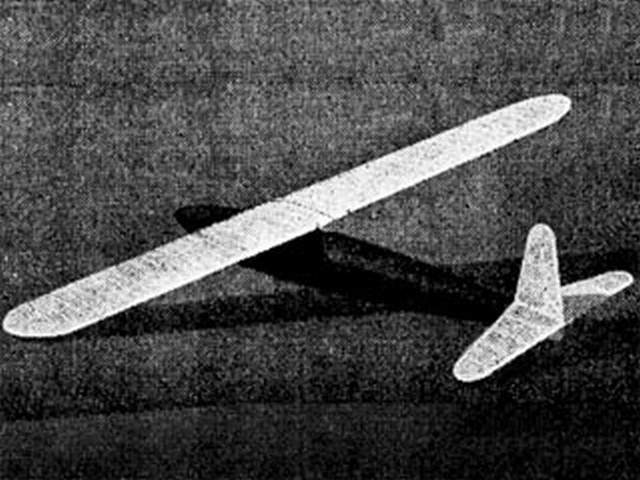