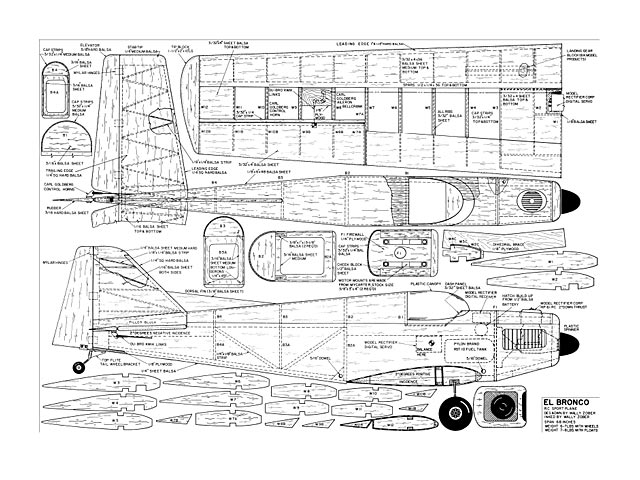 Quote: "A home-built look to this big sport beast for the HP60 engine. Smooth in the air, responsive, stuntworthy. 68 inch span easy to build. El Bronco by Wally Zober.

You say you're tired of those little mini airplanes? You say you're tired of hearing your neighbors comment about you, a grown man playing with toy airplanes? Or maybe your teenage son or daughter has hit you with the remark: Hey dad that little airplane you're flying looks like a Teeny Bopper. If you've been clobbered with these cliches, the 'El Bronco' might be your cup of tea. It's a large airplane, 68 in wingspan, and uses a lot of balsa.

The idea for the El Bronco came about in a strange way. I wanted to do a scale version of a home-built aircraft. To do this you have to be a fast designer and builder. To be fast in both endeavors takes out the hobby aspect and turns it into a job. One job is enough! I do my designing and building for fun and I enjoy it greatly.

Well that's enough philosophy, let's get back to model building. I had picked out two home-built aircraft which I thought would lend themselves to RC; but before I had my drawing half complete, both designs were published. That's the name of the game. I decided to do an original that looked like a home-built. I wanted a low wing tail-dragger type, as they can take off almost anywhere; grass, sand, dirt, concrete or black macadam runways.

The first flight for the El Bronco turned out rather uneventful except for the first take-off. I had my wife at the end and to the left of the runway. She had her camera in hand and was all set to take a picture of the first take-off. The plane had to take off in a cross-wind. I gave it full throttle and it started to race down the runway. I had the mixture a little too rich and she began to load up; but not enough to quit. The engine began to sag just as a gust of wind caught it and sent it straight for my wife, who in the true tradition of all great photographers turned and started running for dear life with the El Bron-co chasing her. The second take-off was a lot better and the ship took off beautifully, even in the high wind. On this sand bar we live on called Long Island, a calm day is wind 10 to 15 mph. The day I flew my brainchild for its maiden flight, the winds were 20 to 25 mph, with higher gusts. I still had the engine a little too rich as it didn't peak out the way I would have liked it to. I tried a few maneuvers and the crate responded quickly and easily; loops were large and smooth, rolls were straight and true. It was really fun to fly it.

Support Equipment, At this point you were probably expecting construction details. That will come a little later. I assure you they will be short, as construction articles bore me. Most scratch builders have their own techniques. Back to support equipment. Whether you're dealing with a 747 super jet or mini RC aircraft you have to have ground support equipment..." 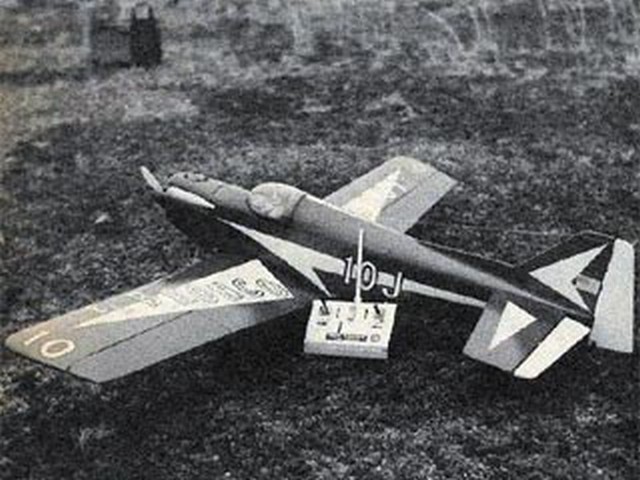