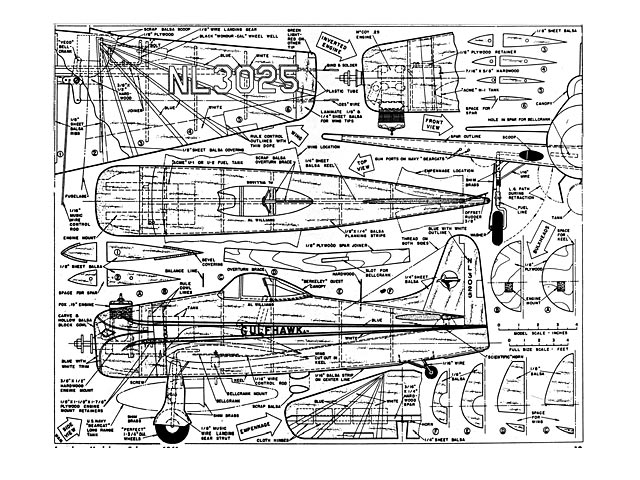 Control line model of Gulfhawk 4 is scaled 3/4 inch to the foot.

The author expresses his sincere thanks to the Gulf Oil Company and the Grumman Aircraft Engineering Corporation for their kind cooperation which made this article possible.

The last of the famous 'Gulfhawk' family of exhibition flyers was a converted Grumman F8F Bearcat US Navy shipboard fighter. The agile aircraft, the crowning achievement of Grumman’s wartime designs, was intended to increase the superiority the Hellcat had gained over the Zero. Unfortunately the Bearcat was delivered just too late to taste combat. The rugged 2,500 horsepower fighter tipped the scales at only 7,095 lb empty and 9,355 lb gross weight. The overload weight with long range tanks was 12,432 lb. Four .50 caliber machine guns or 20mm cannon served as the armament with external shackles for the carriage of bombs or rockets.

Top speed of the Bearcat was 424 mph; it was the fastest climbing plane in the world with a rate of 4,800 feet per minute. The range of the self-sealing, non-rigid fuel tank internally located directly under the pilot was 995 miles. External tanks extended this range to 1,450 miles.

The Bearcat saw action in the Korean Conflict and forms the nucleus of fighter strength for many Far Eastern nations today including Thailand and Vietnam. The last propeller driven fighter employed by the US Navy, it represented the ultimate in propeller fighter design.

Gulfhawk 4th as Al Williams' F8F was called, had several ancestors of distinction. The first was a modified Curtiss F11C Goshawk design and hence the development of the name Gulfhawk. This craft was followed by a redesigned Grumman FF-1 two place fighter which in turn was extensively revamped to form Gulfhawk 3. Al Williams also flew a Stinson Voyager called Gulfhawk Junior for his personal use when traveling. Gulfhawk 4th is undoubtedly the most sleek of the entire family and in model form with its standard Gulfhawk colors of orange, white and blue it became a thing of beauty on the ground and in the air.

Construction. Although not intended for the rank beginner, this model can be completed by anyone who has had previous experience with planking and sheet covering. Our model plans are to the scale of 3/4 in to the foot and are suitable for engines between .19 and .29 cubic inch displacement. The smaller powerplant is ideal for sport-scale use; the larger engine will certainly provide plenty of zip for those who want a 'hot' flyer.

Bend landing gear struts to shape, attach them to plywood supports using 'J' Bolts to keep them from loosening. Make hole in lower covering for the strut, then slip strut assembly through this hole from top..."

Quote: "Steve, Attached is a plan for the Control Line F8F Bearcat Gulfhawk from American Modeler Feb 1961. It was originally drawn by Walter Musciano. It is approximately 3/4in sport-scale and has about a 26in wingspan. Thanks for a great service."