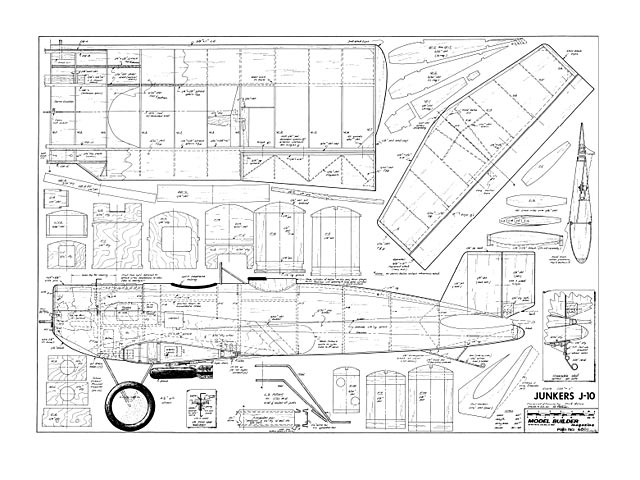 There seems to be all too few scale models available which are both docile and rugged enough for someone who has built and flown only a few R/C planes. The J-10 is intended to safely satisfy that nearly universal urge to build a scale aircraft, once one has mastered ailerons and landings.

As an added bonus, it may be flown at the Rhinebeck and Western Front WW-I Jamboree meets, since the prototype first flew in 1918. Scale is 1.66 inches to the foot.

PHILOSOPHY: The model's fuselage and wing are exact scale (except that the model uses a constant thickness airfoil). The tail surfaces are slightly enlarged. since it is intended to be a scale trainer. The author's model was built to a level consistent to the original intent of Sport Scale, but not to today's ridiculous standards. If you plan to fly this model in Sport Scale today you'd better use corrugated covering, raised seams, rivets, and a fully enclosed engine! Why can't there be a scale event one can compete in without having to build a museum piece?

PROTOTYPE: In 1910, Professor Hugo Junkers proposed the then-radical idea of an all-metal airplane. In World War I he pioneered the all-metal, low-wing monoplane. While his design concepts were far ahead of their time, wartime shortages resulted in many of his planes being overweight and underpowered. Despite lack of support from the German high command, he doggedly persisted, designing and building eleven different models during the course of the war.

The J-10 (military designation CL-1) was a two-place ground attack version of the J-9 fighter. It mounted one or two Spandau machine guns above the engine and a Parabellum machine gun in the rear cockpit. It also carried stick grenades and small bombs deployed by the observer. A total of 47 J-10's were built before the war ended. It was undoubtedly the finest ground attack aircraft produced in Germany during World War I.

FUSELAGE: The fuselage is large and boxy, with lots of room for equipment, but note how the R/C equipment is all mounted well forward. The tank is mounted slightly to the left side so that the throttle servo may be mounted on the right side, under the removable cowl.

Note the liberal use of plywood and hardwood in the forward part of the fuselage. You'll probably need some lead weight behind former N-1 anyway, so you may as well put lots of 'beef' in the area ahead of the wing. Note that N-1 and N-2 are made from 3/16 ply. They are screwed and glued to two pieces of shaped 3/8 in bass, as are the plywood sides, Wet the outside of the plywood sides before bending them in to N1-N2. Coat entire inside of tank compartment and entire inside area forward of the firewall (F-1) with epoxy to seal out fuel. Don't forget to put the three holes in the bottom, forward of the firewall, to let oil and spilled fuel drain out.

The rear turtle deck is a compound curve. It will be easier to glue on if it is first soaked in water for 20 minutes, then rubber-banded in place and allowed to dry overnight. Then remove and cut out a slot for the fin. Glue the rear turtle deck in place after the stab and fin have been glued to the fuselage.

The top 3/32 sheet is glued in place prior to making cockpit cutouts. The balsa ring surrounding the rear cockpit is first formed from two layers of 1/16 balsa on a four-inch diameter can. Make the ring one inch high, grain vertical. Slip the ring halfway off the end of the can and tape it to the can. Then tape a sheet of sandpaper to the top of the fuselage. Rub the ring back and forth until it conforms to the fuselage shape. Cut out the rear cockpit hole and then glue the balsa ring in place around it.

The removable cowl is balsa with plywood formers. It is herd on with the homemade 1/4-turn fastener shown. It can easily be attached or removed, without tools, and with the engine running. Note the channel behind the engine where cooling air can exit up through the first two dummy cylinder heads. I covered my entire fuselage with K&B light glass cloth and resin. Keep the resin to a minimum behind the wing.

ENGINE INSTALLATION: My J-10 uses a Webra .61 Blackhead, which is more than adequate at the model's dry weight of 7 lbs, 5 oz. With such a short nose, it is important to have the correct amount of right thrust (2.50). Here's how to get it right..." 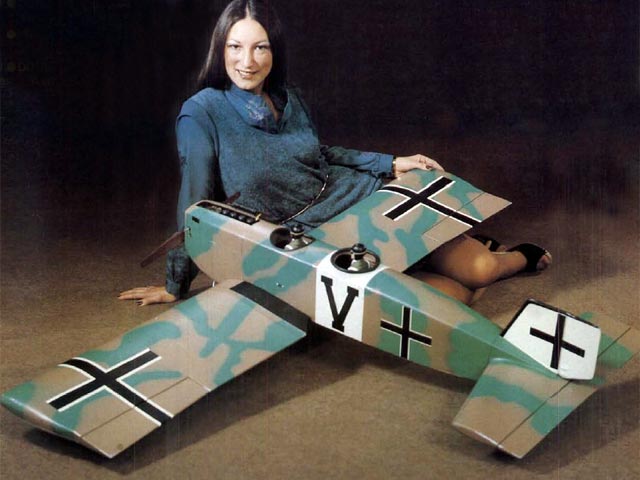 Attached is the article for the Junkers J-10 by Dick Allen in Model Builder, June 1980. I had built this model in 1982, and it was a great flyer. I sold it to one of my club members, and on the very first flight, it crashed due to a failed servo. I rebuilt it for him, and he had it flying for approximately 9-years. About four months ago, I got out the plans and have been slowly redesigning it for electric power. I am not sure when I will start construction, but I am excited about getting balsa dust all over me soon... Best to you,
rocketpilot - 25/03/2020
Add a comment