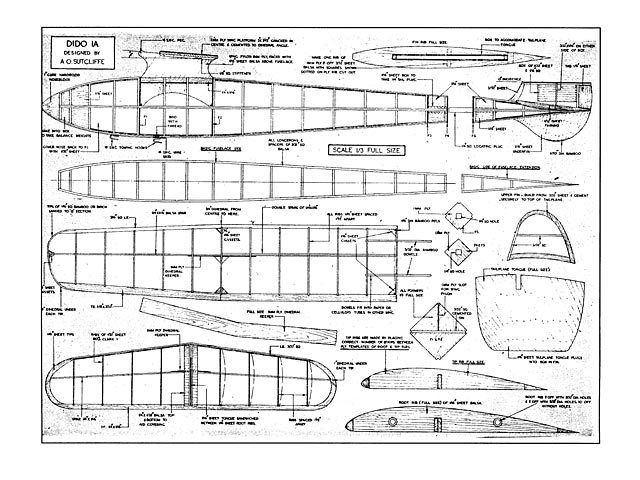 Quote: "Dido 1A. The Dido 1A is a 36 in span glider offered as a 1/3rd size plan. It featured a two-piece wing and a removable tail section so it would go in a modest sized model box for transport. Remember that we usually went about on bikes or public transport in those days. The design characteristics included a Clarke-Y-like section, diamond fuselage, high mounted tailplane and the wing mounted on a pylon with tip dihedral. I nice little project for someone who had already built a few models. "

Quote: "Hi, This time to the February 1996 issue of AEROMODELLER with... free flight plans to pass along the first being a vintage glider originally from the February 1946 Aeromodeller. This was published in the '50 Years Ago' column. It’s DIDO 1A by A.O. SUTCLIFFE. It’s an attractive 36 inch Glider tow line glider designed to fit into a small model box."

This is not a full size plan.